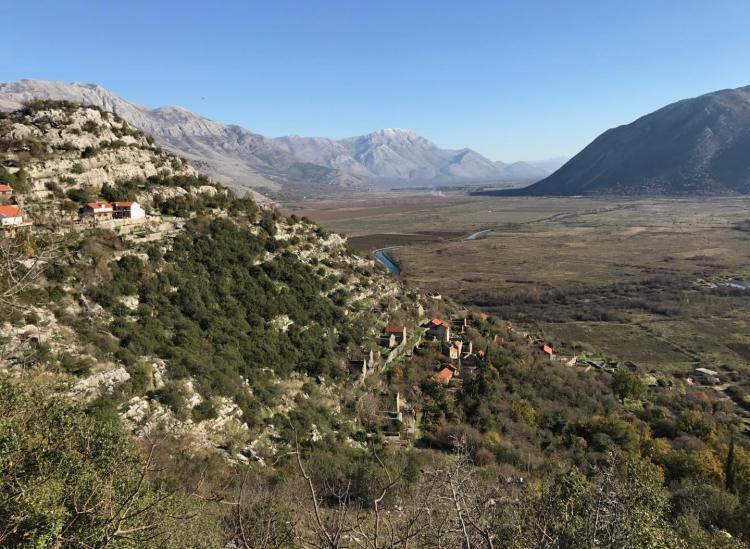 There’s a new long-distance trail calling to all adventurers looking to beat the crowds into a new frontier of wilderness: The Via Dinarica.

The Via Dinarica is named for the Dinaric Alps, southern cousins to the famous peaks of Central Europe. The trail connects eight Balkan countries: Slovenia, Croatia, Bosnia and Herzegovina, Montenegro, Albania, Kosovo, Macedonia and Serbia. It’s a unifying presence in a region most well-known in the west for civil unrest and war.

For those who are a little rusty on their mid-1990s history, much of the region used to be part of Yugoslavia. At the start of the decade, individual countries declared independence from the communist government, igniting a violent chain reaction of war crimes and destruction. Twenty years later, the trail knits together a collaborative path through now-peaceful countries — and some of the most beautiful and remote mountain land in Europe.

Thanks to an invite from the United Nations Development Program (UNDP) team in Bosnia and Herzegovina, Swirled got the chance to break out the hiking boots for a couple days on the Via Dinarica. Here, it’s not just you and the trail. Yes, you’ll hike, eat, sleep and repeat, but beyond the stunning natural landscapes, you’ll walk through rich, tumultuous history and experience the deep local love for the land. 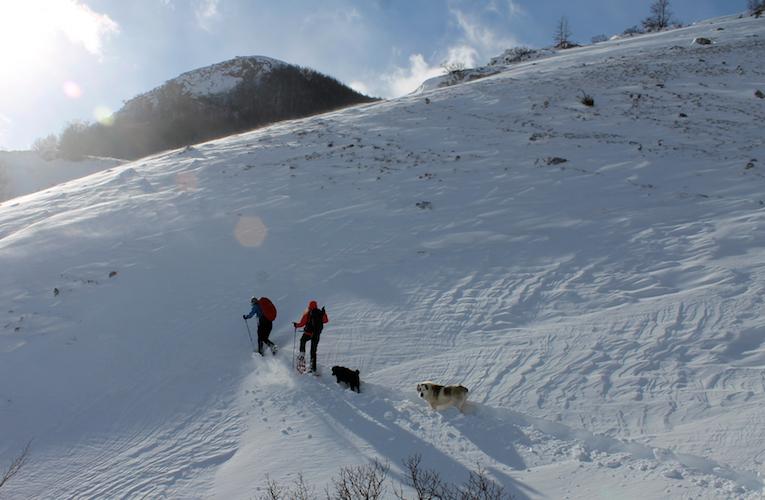 The trail is more than 1,200 miles long, piecing together ancient sheepherding routes, secret wartime paths and well-worn mountain passages. The Via Dinarica has three main routes climbing from Macedonia to Slovenia: the White, Blue and Green trails. The White route takes trekkers high into the peaks of the Dinaric Alps, the Blue hugs the coast of the Adriatic Sea and the Green follows inland foothills and mountains.

The various routes of the Via Dinarica cross through temperate alpine and coastal Mediterranean climates within miles, meaning you’ll see different plants, trees and weather patterns sometimes within the same hike. The Via Dinarica is an all-weather trail — we hit the slopes wearing snowshoes in the middle of heavy snowfall and icy winds, but if you’re planning a long trek, the best season for hiking runs from April to October. 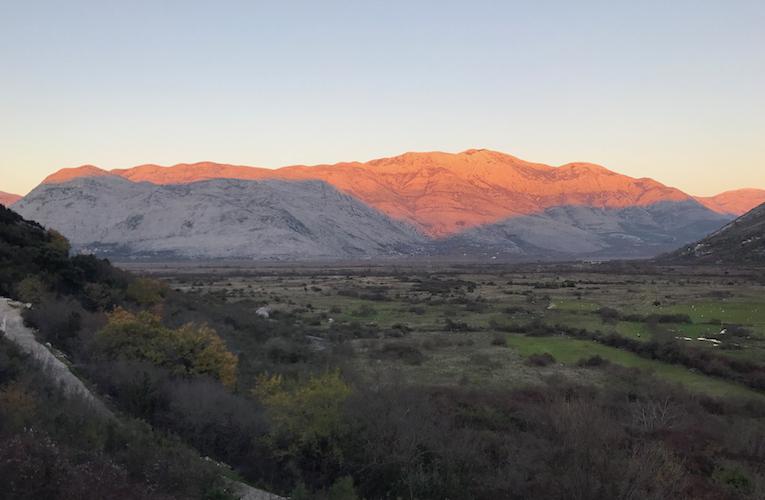 Yes, the Via Dinarica is a work in progress, but the rustic nature of the venture is one of its strongest appeals. There was nobody— not a single footprint— out in the fresh powdered snow of these mountains when we strapped on our snowshoes. Even in peak season, you won’t encounter swarms of hikers. In many places, you’re more likely to run into locals herding livestock than to meet other adventure travelers.

But this beautifully rugged frontier also means paths are still being forged and mapped, making a thru-hike a challenging endeavor. The full trek from Albania to Slovenia requires months on the trail with some serious bushwacking (carving your own path through the wild). Only a few intrepid explorers have walked every mile of the trail, but the eventual goal is to allow a seamless transition from one section to another. 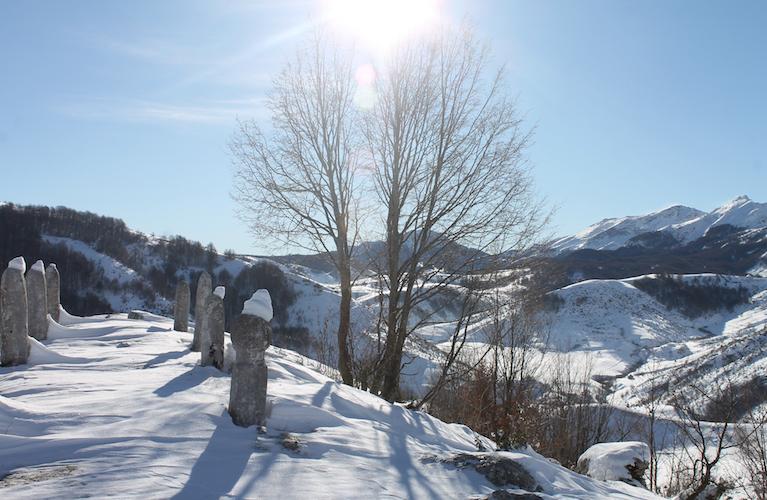 For now, the most developed sections of the trail meander through the mountains of Bosnia and Herzegovina toward Croatia and Montenegro. There’s a GPS system for the entirety of the White trail; that’s where the trail markers are the most well-defined.

If you pick one spot as a home base, choose Sarajevo. You can take Via Dinarica day hikes through the mountains surrounding the capital city, but the city also has frequent buses to other trail hubs, like Sutjeska National Park where you can launch a more in-depth adventure toward Montenegro. 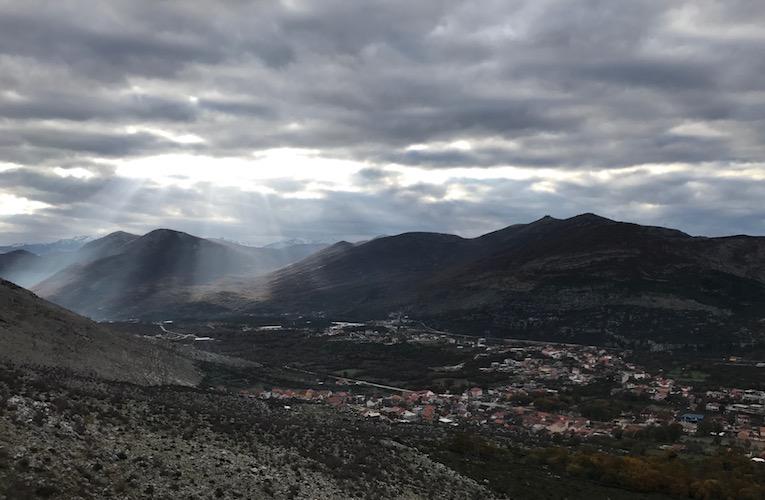 As the project continues in upcoming years, visitors to Dubrovnik, Croatia could hop on the Blue trail and hike to Kotor, Montenegro and beyond. From Ljubljana in Slovenia, Green trail hikers could trek to Sarajevo in Bosnia and Herzegovina and on to Kosovo. Each trail route would have comfortable places to sleep and spots to refuel for another day on the road. 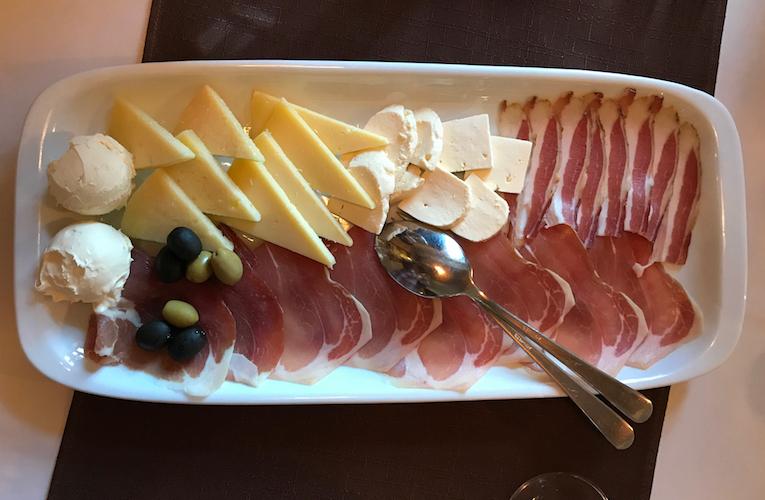 No worries if you’re not that into trail food. Time your treks and meals right and you’ll never be too far away from platters of delicious, homemade cheeses and prosciutto. Since the trail routes pass through many small villages in each country, you can easily share a traditional meal with locals (and probably a drink).

The local brew of choice? Rakija. Locals explain it interchangeably as brandy or schnapps, but no matter which Western drink it’s compared to, the stuff is strong. Try an herbal rakija for the adventurous, pear for the brave and plum or cherry for the newbies. 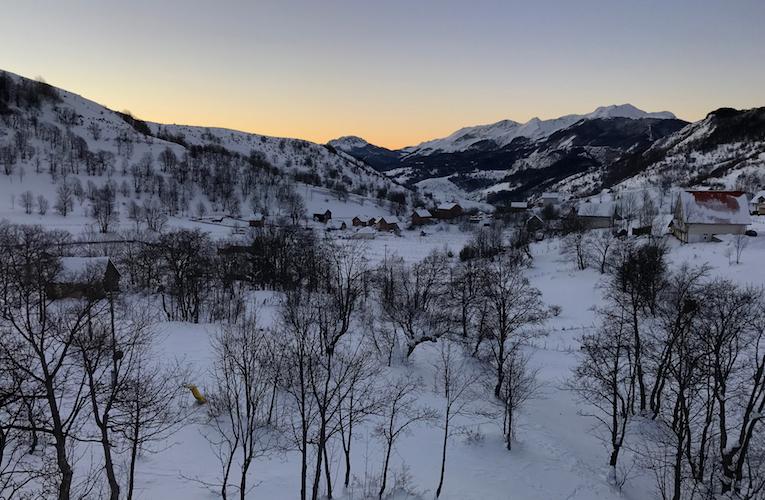 Not a tent person? You’ll love the Via Dinarica. It’s much more of a door-to-door hike than a camping trek.

On our trip, the most often-suggested lodging was a “mountain hut.” But something in that phrase is lost in translation between Bosnian and English. There are “huts” that are little more than a lean-to on the top of a mountain. There are huts that are the epitome of your log cabin dreams (think big open fireplace, wooly blankets and a steaming mug of tea). And there are “huts” that are basically bare-bones hostels with bunk beds and a gas stove for warmth. 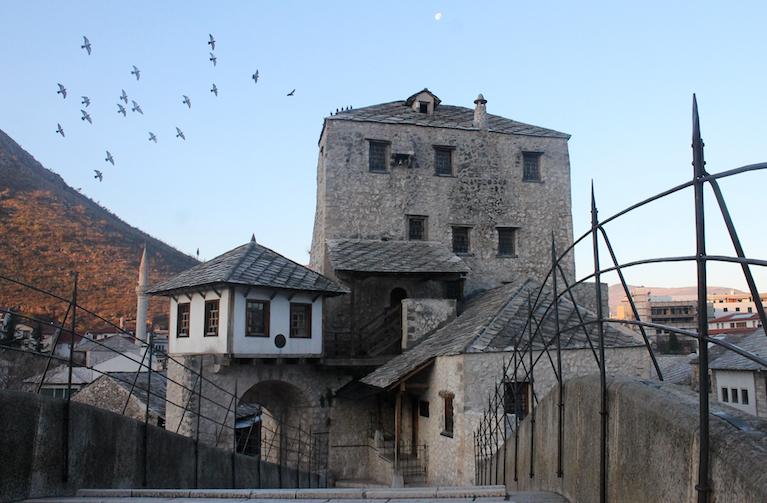 We visited one such hut near Blidinje Lake, a natural reserve not far from the Croatian border. It’s 20 Euro per night for a bunk, access to a kitchen and likely a rakija with the local mountaineering club that operate the hut.

The mountaineers work on a volunteer basis, adding trail markers, opening huts for travelers and sharing their favorite exploring tips. Unpaid, they donate their time out of pure love for the mountains. These are the people working to make the Via Dinarica into that lofty cross-country dream trail. 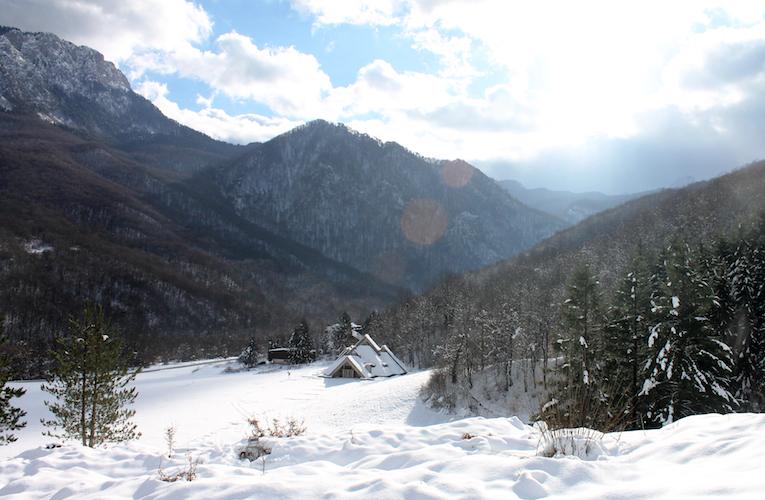 If you are a carry-your-tent-on-your-back kind of adventurer, you can camp. But you’ll need to do a little more research. For instance, Slovenia frowns upon wild campers, while in Bosnia and Herzegovina it’s (unofficially) common. Montenegro’s Durmitor National Park charges a camping fee, but Croatia’s national parks are not camping-friendly. The trail’s route also passes through some bigger cities, so you can choose to stay in a hotel or Airbnb instead of roughing it outdoors. 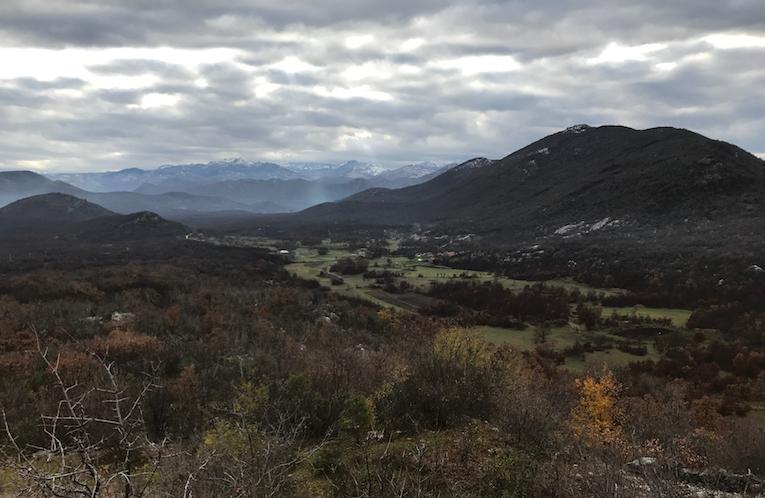 No matter your route, sleeping arrangements or menu, travelers won’t find the kind of polished trail you expect on some of the more famous long-distance trails of the world. But what you will find in the Balkans is an enthralling spirit of adventure and welcome — perfect for travelers wanting to explore the region before its rougher, wilder aspects give way to mass tourism. 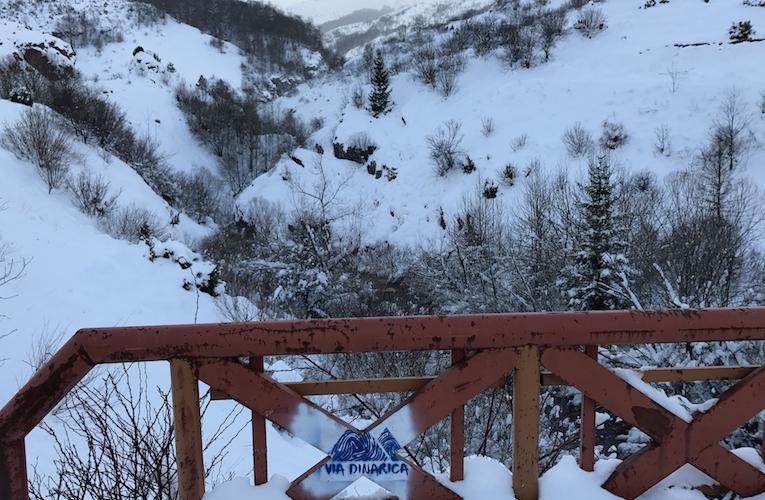 We only hiked sections of the Green and White trail routes in Bosnia and Herzegovina, but the next time we hit the trail (and there will be several return visits), we’re drawn to the routes connecting Montenegro’s Durmitor National Park and Bosnia’s Sutjeska National Park. Or navigating Dubrovnik to Kotor. Or possibly exploring Kosovo. Or maybe even the whole eight-country trek.

Swirled traveled to Bosnia and Herzegovina with support from the United Nations Development Program. We do not accept trips for positive coverage.