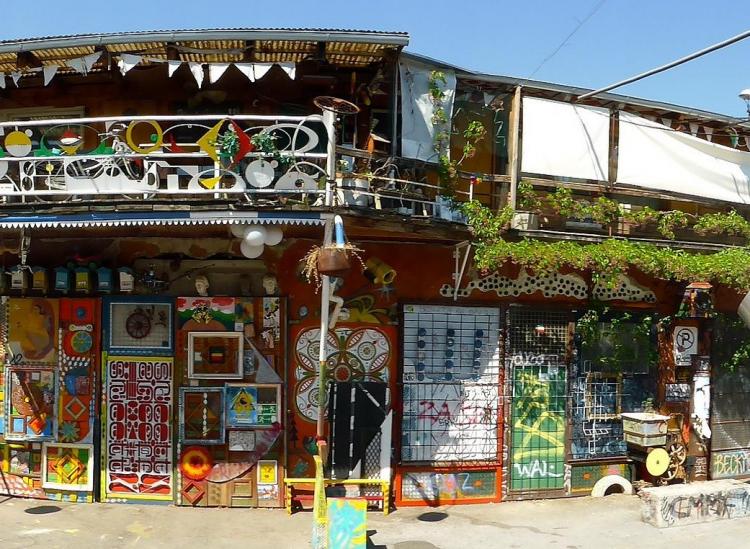 In what used to be a rigid army base, Metelkova mesto is Slovenia’s coolest destination for counterculture art and nightlife. The former military barracks in Ljubljana have been the center of the city’s wilder side for nearly 25 years. It’s a must for travelers yearning to experience more of the Slovene town’s rebellious character.

During a night at Metelkova, you can sip on a beer bought from an unofficial bar (the government pretty much turns a blind eye to the unlicensed liquor sales). You can climb to the top of an elaborately decorated adult playground. And you can browse punk-reminiscent street art – all while talking philosophy, discussing art and swapping travel tales with locals and tourists alike.

Even taken at face value, Ljubljana is an undervalued European capital city. It’s clean, charming, and, when walking along the Ljubljanica river, it feels a bit like a Venice-Vienna hybrid (without the hordes of visitors typical of both famed destinations). It’s not that you’d feel unwelcome in the historic Old Town district. On the contrary, most shopkeepers and street musicians are extraordinarily friendly. But it can feel a bit proper, maybe even posh.

Not so in Metelkova. Here, people party next to artist studios, hang out among crazy sculptures and mix drinks in front of bright murals. The complex is spread out through seven buildings and over three acres of land. Almost every surface in the old military base boasts mosaics. Crumbling roofs are decorated with pendants and the rusting railings morph into sculpture.

This isn’t a happy-go-lucky festival of angel wings street art like we often see in the age of Instagram. Some of Metelkova’s displays veer dark, even a little spooky once the sun goes down.

On any given night you might encounter an underground concert (ranging from jazz to rap to techno to rock), an anti-racist activist rally or slam poetry performances. There are seven clubs in Metelkova, including some of the only LGBTQ clubs in the entire country. The gigantic “autonomous zone” is true hippie paradise – the counterculture spirit runs strong here.

Metelkova isn’t all the way outside the law, although it definitely started that way. You can trace the fascinating roots of the creative community space to the days following the fall of Yugoslavia – a dark period of time for the Balkan region.

Slovenia was the first to withdraw from the coalition of countries formerly known as Yugoslavia (Slovenia, Croatia, Bosnia and Herzegovina, Montenegro, Serbia and Macedonia). Newly released from communist rule and spared the extreme violence of its neighbors’ fight for independence, Ljubljana officials wanted to tear down the army base – originally built in 1911 – after it was abandoned by the authoritarian Yugoslav People’s Army.

Artists petitioned the government; they wanted it intact for cultural use. Their requests were denied, but squatters moved in anyways, beginning a years-long struggle between counterculture activists and local government.

In 1993, as wars tore through other Balkan countries, more than 200 protesters completely took over the abandoned military barracks and claimed Metelkova as an “autonomous zone.” The artists said they ruled the space.

The next ten years were filled with debate. Buildings were destroyed by the government, then rebuilt by the artists. Galleries were opened, closed and reopened. Then in 2006, the area was named a national cultural heritage site. Currently, the government runs a nearby museum and local groups take care of Metelkova.

But it’s not a haven for artistic chaos. There’s a group of artists and activists who ensure Metelkova is kept in decent condition, and they don’t intend to make their autonomous zone a true separate governmental state. Volunteers assist in galleries and common spaces with a simple shared mission: keep Metelkova an open and tolerant space for artistic collaboration, civic engagement and reflection – and the highlight of Ljubljana’s social scene.

Ready to make your own Metelkova memories? Celica Hostel is built right into the old army prison. Rooms range from $30 during the high season to just $17 during the off-season.

Ljubljana isn’t far from its aforementioned style sisters Venice and Vienna. From Vienna, it’s an easy train ride (through some of Slovenia’s prettiest countryside and the Julian Alps). From Venice, many Croatian cities, we’d suggest combining trains with local buses for the most direct route into town.