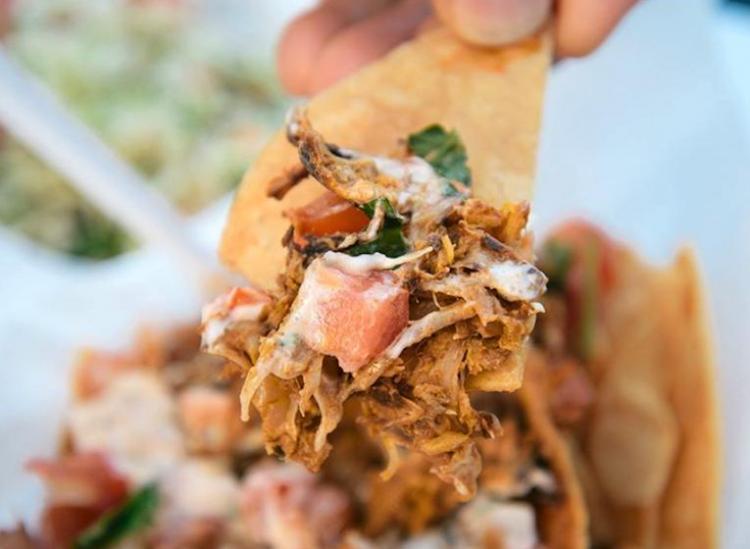 Right next to tofu and tempeh lies another plant-based meat substitute that’s taking over. It’s called jackfruit. Fans of the strange-looking fruit say it’s an awesome substitute for pulled pork, shredded chicken or beef brisket in all of your plant-based recipes. The tree-born tropical fruit has a mild flavor that works well with a variety of seasonings and it has the perfect stringy consistency. On top of jackfruit’s versatility in the kitchen, the exotic fruit is packed with nutrients. You’ll get the health benefits from the high amount of dietary fiber and vitamin C.

With the right seasonings, jackfruit can become just about anything you want it to be. Here’s a recipe from The Jackfruit Company for jackfruit “crab” cakes seasoned with vegan mayo, mustard, capers, lemon juice and gets a kick from cayenne. Serve the cakes on a bed of mixed greens and consider making a vegan tartar sauce on the side — just combine vegan mayo, capers, red onion, lemon and Dijon.

Pool parties aren’t complete without sliders. You shouldn’t have to miss out on the summertime favorite because of your choice to avoid meat. Try these BBQ jackfruit sliders that’ll make you forget all about pulled pork. The jackfruit gets seasoned with onion, garlic, BBQ sauce, smoked paprika, onion powder and liquid smoke.

Here’s a vegan slaw recipe with olive oil, lemon juice, garlic and cumin that’ll go perfectly on top of pulled jackfruit. Even meat eaters will want in on these BBQ jackfruit sandwiches.

There’s something about a pot pie that makes you want to curl up in a cabin with wine in front of a fireplace. Here’s a vegan pot pie that’ll have all of your comfort food cravings fulfilled. You’ll still have all of the amazing flavors from the onion, garlic, bay leaves, rosemary and olive oil, plus hearty pieces of potato, carrot and frozen peas. Between vegan butter, flour and almond milk, you’ll barely taste a difference in texture and you won’t have to worry about any kind of upset stomach from the dairy. You’ll be surprised how close this can be to the real thing.

Spicy Mexican food fans, you’ll want to get jackfruit tacos under your belt. These spicy jackfruit tacos are flavored with coconut oil, garlic, smoked paprika, cumin, chili powder, coconut sugar, chipotle peppers, lime and adobo. Make sure you get canned jackfruit that’s in water. In terms of toppings, go crazy with all of the shredded cabbage, cilantro, salsa, chimichurri or black beans that you want. Grab yourself a stack of corn tortillas and you’ll be good to go.

Who doesn’t love a good gyro? The traditional Greek street food usually has some kind of meat that’s cooked on a rotisserie along with tomato, onion and tzatziki sauce inside of pita. Here’s a recipe for vegan gyros with cucumber, cherry tomatoes, tzatziki, lettuce, red onion and potatoes. The jackfruit “pork” is seasoned with spices like cloves, cinnamon, white pepper, oregano and chili powder along with apple cider vinegar, soy sauce, maple syrup and tomato paste. These are perfect to serve buffet style when you have a bunch of guests over for dinner.

For a jackfruit dish with a little crunch, make nachos. These vegan nachos are loaded with black beans, tomatoes, sliced jalapeños, green onions, cashew nacho cheese and avocado. The cashew nacho cheese is made with nutritional yeast, turmeric, garlic powder, smoked paprika and chili powder. Liquid smoke will be another handy ingredient here. You’ll get all of the crunchiness, all of the spice and all of the nuttiness without any of the meat or the dairy.

Hot sauce lovers, you’ll probably become addicted to buffalo jackfruit pizza. You can easily make a vegan buffalo sauce with vegan butter and hot sauce and shred it on top of a pizza with your favorite tomato sauce and vegan cheese. Here’s another vegan jackfruit pizza with BBQ sauce, jalapeno, pineapple, red onion and vegan cheddar. As long as you get your hands on store-bought pizza dough, you’ll have a homemade pizza in under an hour.

Here’s How To Craft The Ultimate Vegan Charcuterie Board

Here’s How You Can Make The Perfect Vegan Birthday Cake