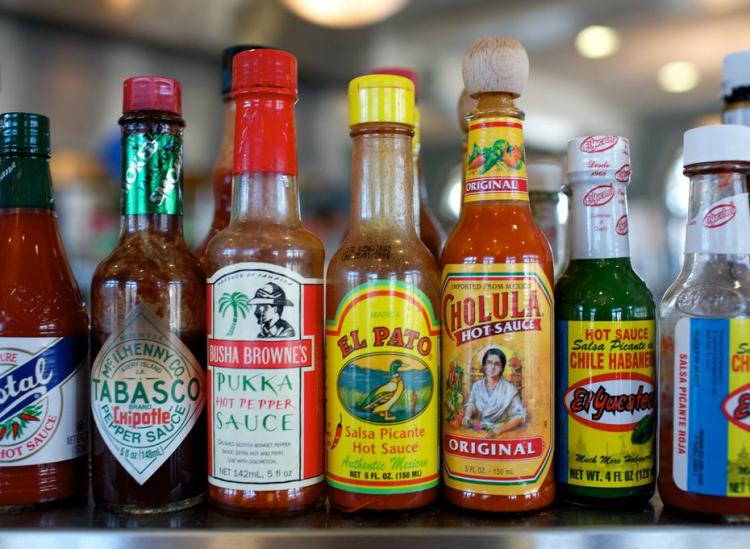 Some like it hot. Chances are if you’re a true hot sauce fan, you probably keep a bottle on you at all times just in case something needs a kick, which is pretty much everything. There’s been a steep incline in hot sauce’s popularity as a whole over the past couple of decades, but it’s Tabasco that started it all. Louisiana-style Tobasco sauce, which has origins in cajun and creole cuisine in the South, is basically like the Kleenex of the hot sauce world. Americans seem to love hot sauce on just about anything, but it might be helpful to know, which sauce goes best with different foods. Here’s the definitive guide of hot sauce pairings:

Whether you’re a pizza purist who loves the Italian staple in its natural fresh-out-of-the-oven form, or you’re a hot sauce fiend, there’s no denying the winning combination. Before you go and douse your margherita pie with any hot sauce, take a breather. The cheese doesn’t really play a role in this decision because it’s too mild and dairy generally tends to mellow out the spiciness anyway. You could go with a mild sauce like the original Cholula, which you can also put on mac and cheese, french fries and eggs. Alternatively, you could opt for a hot sauce with ingredients similar to tomato sauce, like garlic and onions. The company Lucky Dog Hot Sauce makes a version called Hot Fire-Roasted Pepper Sauce with white onion, carrots and a bunch of roasted garlic in a mellow cider vinegar. This sauce is savory and flavorful and packs in an extra kick. Creamy Formosa Hot Sauce would also be a fiery addition to your pizza with its chipotle kick.

There are many definitions of the perfect fish taco. At its very core, a fish taco should be light and crunchy with a lightly fried white flaky fish, a contrasting creamy and crunchy slaw and some kind of spicy element. Frankie V’s Fiery Hot Sauce is a small batch habanero and-vinegar based sauce with a bold flavor. They call it the “spicy ketchup” of hot sauce and it’s made with organic ingredients like garlic, white onion, rice vinegar, ginger and lemon juice, which goes great with fish. Char Man Caribbean Hot Sauce is made with island spices and hints of mango and pineapple, and the tropical sweetness pairs really well with seafood, and especially fish tacos. On the note of Mexican food, Queen Majesty Scotch Bonnet and Ginger Hot Sauce is a vibrant sauce with hints of ginger and lime that goes well with quesadillas.

There are so many ways you can go with wings and fried chicken. The ultimate hot sauce pairing is Franks RedHot, with its unrivaled blend of aged cayenne peppers. Afterall, Franks RedHot was the sauce used as the secret ingredient for the very first Buffalo wings, invented in Buffalo, New York. So what’s the difference between hot sauce and Buffalo sauce? It’s butter. You can also make your own Buffalo sauce at home by mixing Frank’s with butter, garlic and salt. This time-honored hot sauce initiated the craze of all things Buffalo-flavor. Mix some into a bag of popcorn for a fiery movie snack. The saying holds true: I put that shit on everything. For a dipping or a smothering sauce, Iguana Gold Island Pepper Sauce is a tangy, medium-hot, habanero and mustard-based sauce. It’s Bajan-West Indian-syle with fresh onion, garlic, carrot, cucumber, mustard and aromatic spices like cumin. The spice will hit you right away, but there won’t be a lingering aftertaste. You could also mix up some Queen Majesty Scotch Bonnet sauce, based on a Jamaican jerk recipe, with some honey and use it as a chicken wing marinade.

If you’re craving a burger,  but you’re also in the mood for a hot sauce that’ll make you cry, Pain Is Good Hot Sauce — the Louisiana-style is the milder one of the bunch with 3,880 Scoville Units — is a killer addition to a juicy burger. Formosa Hot Sauce works just as well on a burger as it does pizza. Produced in California, Formosa uses six different kinds of chilis including Arbol, Jalapeños and Habaneros. Some of the chilies are roasted and then everything is blended together to create a spicy and creamy sauce with hints of chipotle.

Veggies are pretty essential, but sometimes you might wanna mask the healthy taste with some spice. Cholula is perfect for avocado toast since it’s fairly mild and it won’t overpower the avocado. Add a few dashes of hot sauce and a sprinkle of red pepper flakes and you’ll be good to go. When it comes to roasting other kinds of veggies like Brussels sprouts or broccoli, Momofuku Ssäm sauce is the ideal tangy hot sauce for the job. It’s made with gochujang, an umami-packed Korean chili paste, and it works with everything from burgers and pizza to meats and vegetables. Ssäm Sauce packs a lot of spice, but it also has a complex flavor at the same time. Another good one for vegetables is Melinda’s Hot Sauce. The original habanero sauce is made with red habanero peppers, fresh carrots, onions, lime juice, vinegar and salt. The vegetable base of this one lets you add a spicy element without drowning out the flavors of the veggies you’re cooking with.

Who doesn’t love a good bloody mary for brunch? Nothing will get you out of a funk like a combo of vodka, tomato juice, Worcestershire, lemon juice, horseradish and hot sauce. Blood Mary’s are getting elaborate these days with entire meals piled on top like bacon, burgers and grilled cheese, but at the end of the day a hot sauce can make or break the beloved cocktail. Tabasco Chipotle Pepper Sauce is traditional, but Sriracha might be the best for the job with its strong garlic and peppery undertones. Sambal Oelek can be used as a substitute for Sriracha when you’re cooking. This is a spicy Southeast Asian chili sauce made from hot red chili peppers, salt and on some occasions vinegar, onion, lemon or lime juice, garlic and sugar.

Some of you might be married to a specific hot sauce and that’s perfectly ok, but if you want to try some new pairings, give these spicy creations a shot.