Burning Sage Seems A Little Woo-Woo, But It Really Is Beneficial To Your Health 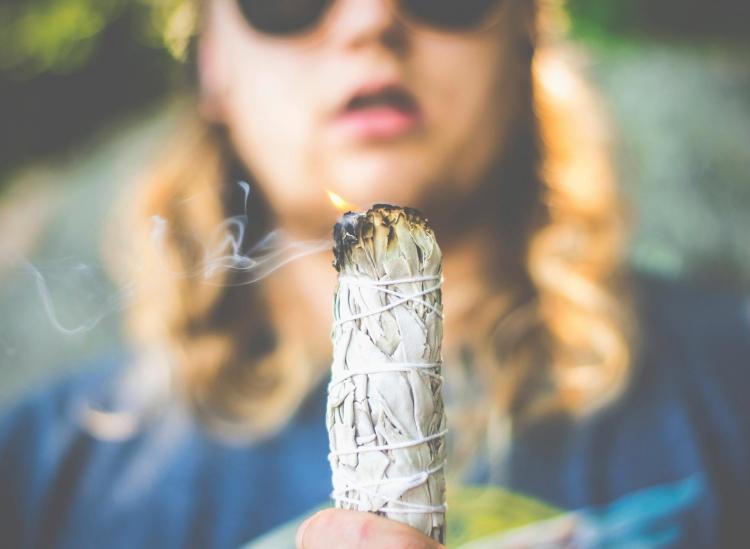 Whether you’ve seen it in your yoga studio, at a friend’s apartment or on a spiritual influencer’s Instagram account, you probably know what sage burning (or smudging) is by now. The energy-cleansing ritual has ancient roots among indigenous peoples, and it’s believed to clear negative or unwanted energy from a space, a person or a group of people.

Now, that benefit — which is the most highly regarded — is one of the few that hard science can’t prove, but there are true benefits to bringing this herbal smoke into a space in which you spend a fair amount of your time.

First things first, smoke from white sage is considered medicinal due to its antibacterial properties. Research has found that burning sage in a particular space can reduce the bacteria in the air by a significant 94 percent. So even if you don’t necessarily buy into the energy removal stuff, know that you’re at least sanitizing your home. Not to mention, because it’s 100 percent natural, you don’t run the same allergic reaction potential you do with chemical-based cleaners.

Of course, we also have to address smudging’s connection to mindfulness. Because of the ritualistic nature of burning sage, it helps you achieve a similar sense of calm and clear-headedness as meditation. It often involves the repetition of a mantra, and the slow and intentional movement of the smudge stick around your space can easily be compared to the use of mala beads in a seated meditation practice. Each aspect of the sage-burning ritual pulls you deeper into your space, brings you into the present moment and removes distractions so that you can explore what remains.

And last but not least, sage burning offers aromatherapeutic benefits. (Read: It smells good!) Burning white sage has an herbaceous, woody and astringent scent. It’s not enjoyed by everyone — few things in life are — but it is definitely one of those smells that evoke memories in the minds of those who come across it. And in the aromatherapy world, it’s known to have a grounding effect, helping people think more clearly and feel less anxious in general.

So regardless of whether you choose to use a white sage smudge stick with the ancient ritual in mind, know that it could occupy a rightful place in your home, as well as your self-care routine. Worth a try, right?

If You’re Thinking About Jumping On The Jade Rolling Trend, Read This First

Shower Bombs Exist, And You Need To Add Them To Your Self-Care Routine ASAP