7 Of The World’s Most Beautiful Lantern Festivals 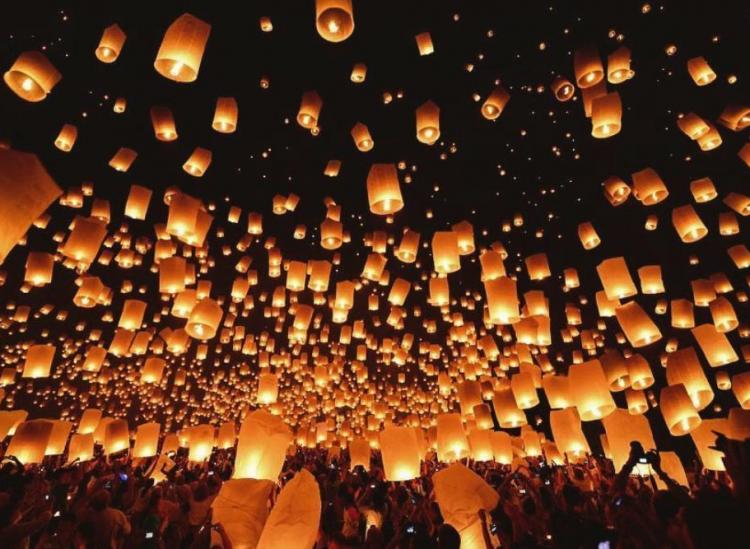 There’s nothing quite as beautiful as seeing hundreds of lanterns floating across the sky or on the water. This — along with the Insta-worthy photo opp — is likely why so many travelers are attracted to lantern festivals all over the world. Here are seven of the most gorgeous ones that we could find. You should add these to your travel bucket list ASAP.

The RISE Festival is a lantern festival held yearly in the Mojave desert in Nevada, about 25 miles south of Las Vegas.  The festival starts mid-afternoon with live soul music. Later in the day, participants get a chance to prepare their own lanterns— even adding a hidden message if they choose. At dusk, thousands of lanterns are released in unison. The next festival will be held on October 5th and 6th, 2018.

2. The Diwali Festival Of Lights — India

Diwali— commonly known as the festival of lights— is the biggest festival celebrated by Hindus around the world. Usually celebrated in early fall, the festival takes place all over the globe, most notably in India. The festival falls on the 15th day of Kartik, the holiest month in the Hindu lunar calendar. During the celebration, clay lamps are lit to signify the victory of good over evil.

Held annually on Memorial Day, this festival takes place on the south shore of O’ahu, Hawaii. During the ceremony, approximately 50,000 people gather on the beach with the goal of honoring loved ones and offering gratitude to those who have passed. Participants place their lanterns onto the water with wishes for peace and happiness of loved ones lost, resulting in a beautiful sea of floating lights.

This lantern festival is held yearly on Marine Day (also called “Ocean Day”), a Japanese national holiday that usually falls on July 16th. As you could probably tell by the name, the point of the Japanese lantern festival is to celebrate the ocean. The celebration is held on Odiba Beach in Tokyo where volunteers set up hundreds of paper lanterns in bright, fancy designs along the sandy beach.

This Thai lantern festival is celebrated every year on the full moon of the Thai calendar’s 12th lunar month (which usually falls in mid-November) in Chiang Mai, Thailand. In Thai culture, the point of this festival is to make a wish for good fortune in the new year. During the celebration, thousands of candle-lit paper lanterns are released into the northern Thailand sky and onto Ping River.

Yuan Xiao is a Chinese festival that marks the final day of the traditional Chinese New Year celebrations. It falls on the 15th day of the first month in the Lunisolar Chinese calendar, which usually equates to February or early March.During the celebration, countless lanterns are released into the sky. The festival began more than 2,000 years ago and is still a way for locals to make wishes for the New Year and to celebrate family togetherness.

The festival takes place in Hoi An, a city on Vietnam’s central coast. The Hoi An festival is celebrated on the 14th day of each lunar month, according to the Lunar calendar. During the festival, all of the electric lights in the old town of Hoi An are turned off, and thousands of colorful lanterns and candles are lit along the city’s streets. The festival is an opportunity for locals to pay tribute to their ancestors. Traditionally, it is believed that the lighting of lanterns will bring good fortune and love.

The Coolest Chinese New Year Celebrations Across The Country