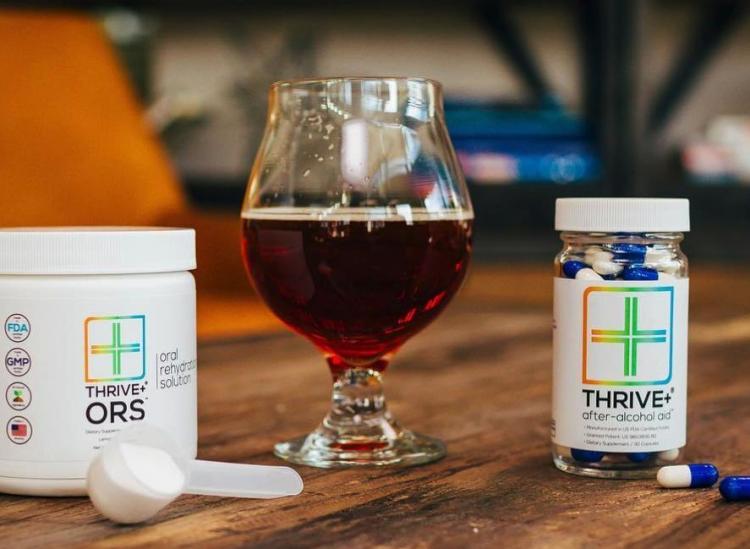 Regardless of whether you’re a senior in college or a 35-year-old out for happy hour with the girls, your body doesn’t like alcohol as much as you do. In fact, it rebels against it at all costs, from the way your liver reacts as you sip a glass of wine to the way your head feels the following morning. But there’s now a supplement on the market that could help your body handle alcohol’s toxicity in a much more efficient way.

Thrive+, an after-alcohol aid designed by 2017 Princeton University graduate Brooks Powell, uses an active ingredient called dihydromyricetin (DHM) to reduce alcohol’s multitude of negative effects on the human body. This compound has a large antioxidant property, which means it helps the body neutralize or counteract toxins like free radicals (or, in this case, metabolized alcohol). It’s naturally found in the Ampelopsis grossedentata (or moyeam) plant in central and southern China and the Hovenia dulcis (or Japanese raisin tree).

A 2012 study published in the Journal of Neuroscience found that DHM was able to help rats sober up, reduce their existing amount of liver damage, avoid hangovers and prevent the downward spiral of alcoholism entirely. Following this study, the National Institutes of Health approved a $2.5 million grant to look further into DHM’s effects in relation to human alcohol consumption.

According to Powell, because DHM binds to the same receptor in your brain that alcohol does, it’s able to control the short-term alcohol withdrawal symptoms (AKA hangovers) that most people experience after a little too much boozing. By doing so, it also allows your body to fall into its natural sleep state that alcohol tends to interrupt, helping you gain quality rest after an alcoholic beverage (or three).

While scientists don’t yet understand why exactly, DHM also speeds up the rate at which your liver metabolizes alcohol. It tells this vital organ to accelerate its enzyme activity, which breaks the toxic compounds down so your body can recover more quickly.

Because metabolizing alcohol puts your body through a lot of oxidative stress, Powell made N-Acetyl Cysteine the second active ingredient in Thrive+, which helps to replenish intracellular glutathione, the “master antioxidant.” These levels drop dramatically as you drink alcohol, so giving your body a boost of them at the end of your night out can significantly aid in your body’s recovery and help with any systemic negative effects.

Lucky for you, it’s physically impossible to overdo it (or overdose) with DHM and N-Acetyl Cysteine and there aren’t any negative side effects to taking them, either. Both of these compounds are well-studied and, so far, reveal no medical concerns. You just adjust your Thrive+ dose depending on how much alcohol you consumed in a given night, down the pills with a large glass of water before bedtime and let them work their magic.

A friendly reminder: This product doesn’t act as an excuse to drink more than you normally would since it helps you avoid the morning-after struggle. Instead, it’s supposed to help you live your balanced life in a happier and healthier way. Because, at the end of the day, you should be able to enjoy a beer at a backyard barbecue or a flute of champagne during a celebration without stressing about what’s happening to your insides. Life’s too short.

Here’s How Hangovers Mess With Your Mind

We Tested 3 Hangover Cure Products To See Which Works Best