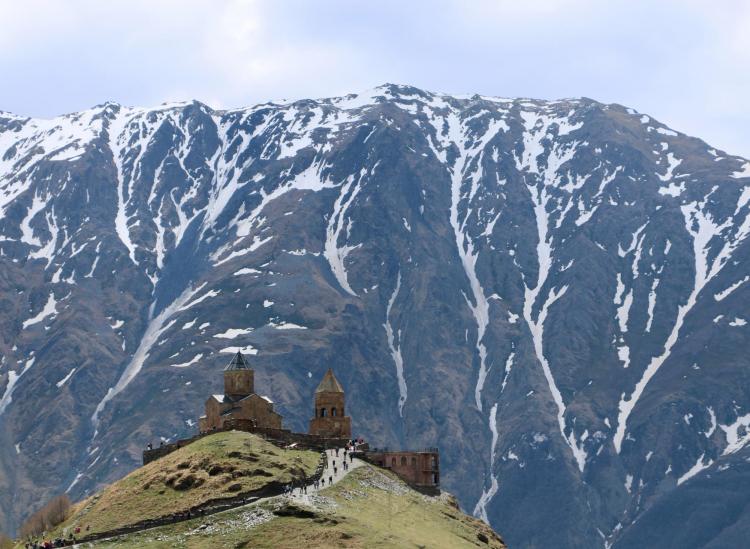 Gergeti Trinity Church is so beautiful that it looks like a cartoon, some sort of Disney movie brought to life deep in the mountains of Georgia (the country in the Caucasus, not the U.S. state).

Set 7,000 feet above sea level in snow-capped mountains, Gergeti is one of the most famous landscapes in Georgia. And you can hike to the traditional church from the small village below. 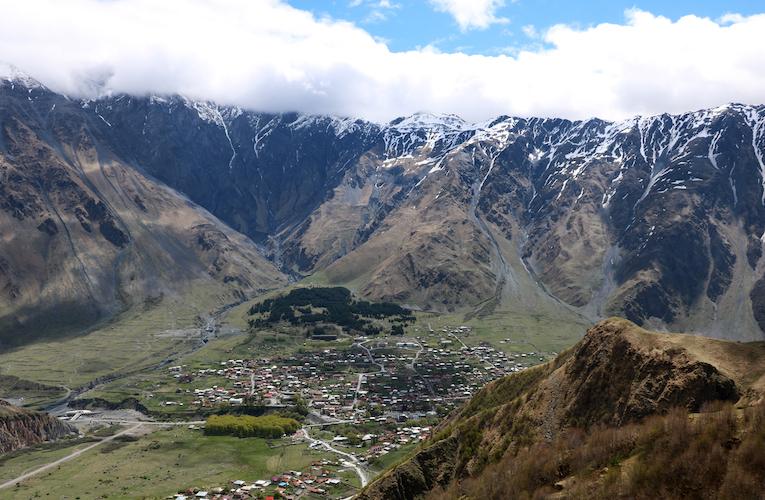 The climb to the church begins in the village of Stepantsminda (formerly called Kazbegi and still referred to as such by many maps and locals). The walk is short, but strenuous. It’s three hours straight up a mountain and your thighs will feel it. Oh, side note, the altitude is real. Prepare to be breathing a little harder, we know we were. 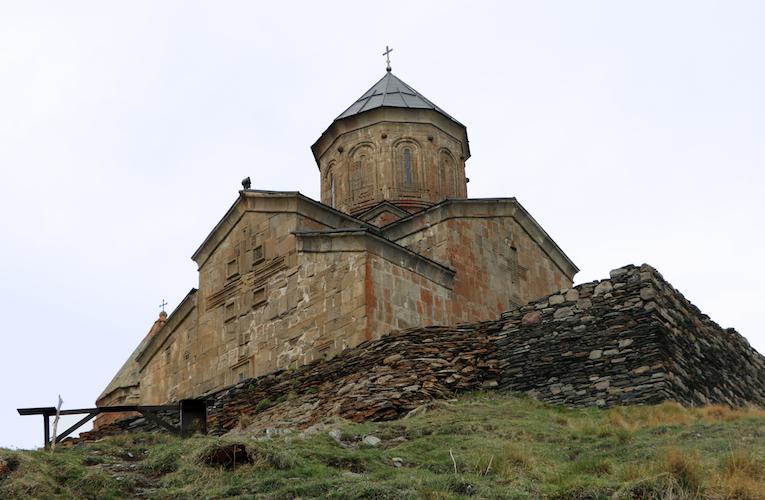 There are several paths you can use to reach the church. From the main village, you’ll see a fork in the path. One path goes toward a dramatically crumbling tower, while the other goes up through the village. The tower option doesn’t lead directly to the church, however, the views are arguably better than the ones on the direct route of switchbacks. 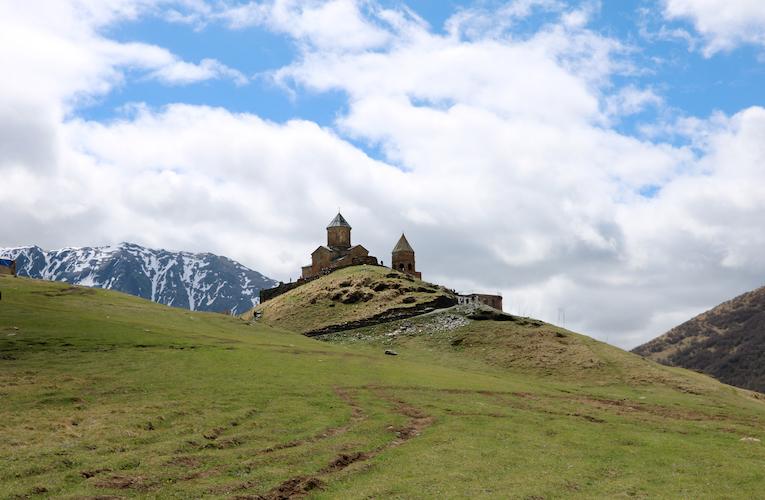 The church’s mountain range has its own legend as well (um, can you say movie fodder?). Georgian folklore says a hero named Amirani stole fire from the gods and brought it down to earth. Just like the Greek myth of Prometheus, he was chained to the top of the high mountains.

The actual church is Christian-built on the pagan site. The Georgian Orthodox and Apostolic structure was developed in the 14th century and was used as a hiding place for relics during the 18th-century Persian invasion. During the Soviet times, there were no church services, but the church continued to be a stopping point for travelers passing between Georgia and Russia (the Russian border is basically in Gergeti’s backyard). 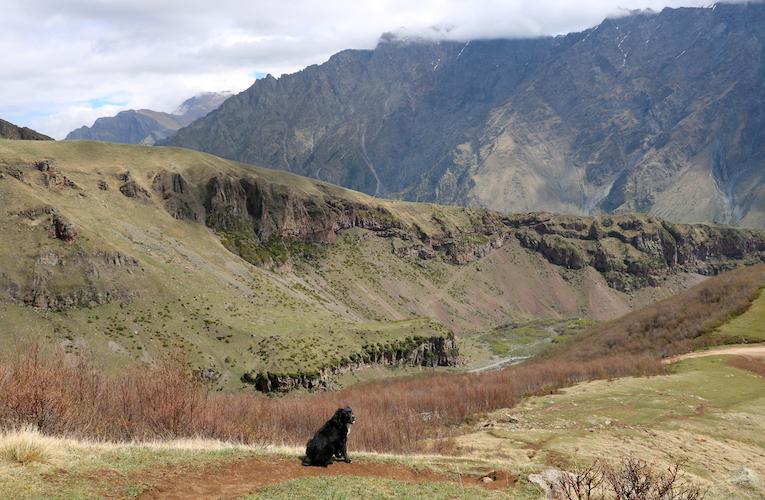 Every Disney movie needs a good animal sidekick. Gergeti has that part down. Hiking up from the village, lucky trekkers will encounter some helpful mountain sheepdogs eager to join the trip. They’re friendly, although a little rowdy. On our hike, we had a crew of three dogs, although only one stayed with us for the entire seven-hour journey. If you don’t want them to loyally follow in your footsteps, don’t make eye contact, greet them or, god forbid, feed them. 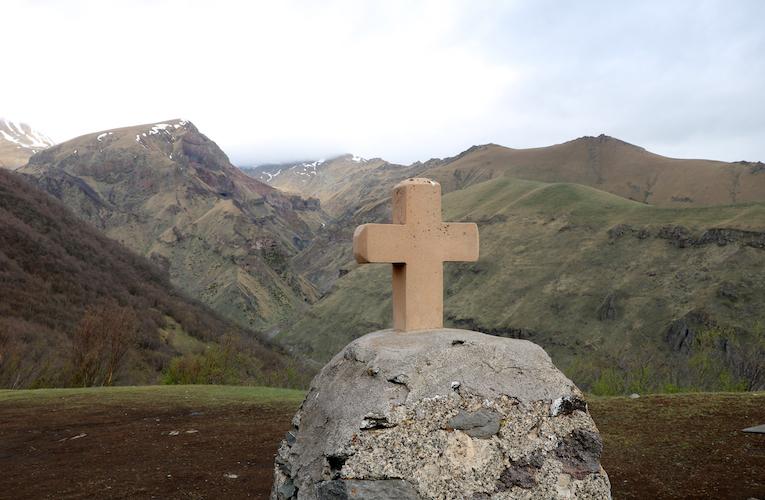 Nearby Mount Kazbek is Georgia’s third highest mountain (about 16,500 feet high). It’s actually a dormant volcano and is one of the most popular trekking destinations in the country. However, unlike the hike to the church, you need a mountain guide to summit the peak.

If you want a hike at a higher elevation, but don’t want to find a mountaineer to help you to the top, Gergeti Glacier is a good bet. It’s a one-day hike — although a long one. It’s eight hours to the glacier, five hours to reach the icy land formation and then another two to three hours to get back down. 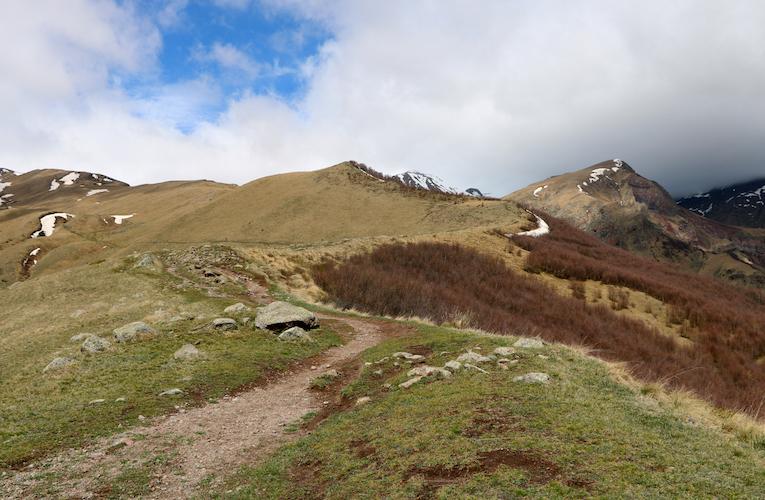 To get to Stepantsminda/Kazbegi, you’ll need to drive through Jvari Pass. These mountains are some of the most beautiful in the world, but also some of the scariest to drive through. Lanes are fairly optional for Georgian drivers. We suggest either taking a local bus (called a marshrutka) or hiring a driver. You’ll feel better with an experienced driver on these roads so you can take in the beauty of your surroundings.

This Gorgeous Church In Colombia Needs Its Own Disney Movie ASAP

Even If You’re Not Religious, You’ll Be In Awe Of These Stunning Churches