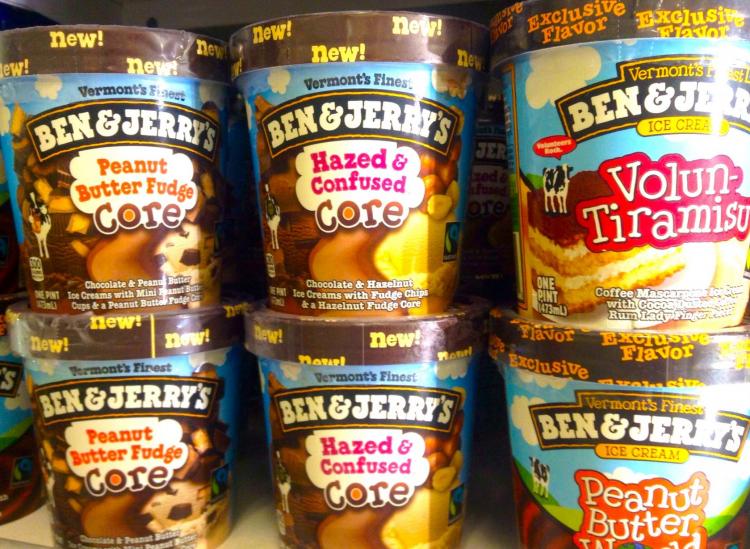 Even with the rise of low-calorie, low-sugar pints, no one can deny that Ben & Jerry’s ice cream reigns supreme. There’s just something about the creamy deliciousness and comforting flavors that no one has been able to replicate. We also love that the ice cream company isn’t afraid to stand out and test boundaries — after all, it invented the infamous Karamel Sutra pint.

So to celebrate the wonder that is Ben & Jerry’s, here are eight quirky facts that you probably didn’t know about your favorite ice cream brand.

1. There’s a graveyard for all of the discontinued ice cream flavors.

And you can visit it, too. The Ben & Jerry’s flavor graveyard is located in Waterbury, Vermont. There lie the tombstones of more than 300 discontinued flavors. Creepy, right?

When Ben & Jerry’s was founded back in the 1970s, founders Ben Cohen and Jerry Greenfield originally wanted it to be a bagel company — until they took a look at the price tags of bagel-making equipment and gave it a second thought.

In 2018, B&J’s teamed up with Scotland-based Bross Bagels to produce ice cream-filled bagels in the United Kingdom. That’s kind of the same thing, right?

3. B&J’s employees can take up to three pints of ice cream home with them each day.

With more than 60 delicious flavors to choose from, they have more than enough options.

4. The company cares for its cows.

Through Ben & Jerry’s Caring Dairy program, the company has pledged to care for the well-being of cows and their farmers by making sustainable farming techniques a priority and refraining from using artificial growth hormones in the milk that they use to produce their ice cream.

5. In addition to ice cream, the company used to sell soup.

Ice cream with a side of soup? That sounds like an awfully weird combo to us, but that’s what Ben & Jerry’s used to sell when the business first launched. Oh, and it also sold crepes and pottery. The first scoop shop was basically a one-stop shop for all of your needs.

6. None of the OG B&J’s pint flavors survived.

Ben & Jerry’s first seven pint flavors included Oreo Mint, French Vanilla, Chocolate Fudge, Wild Blueberry, Mocha Walnut, Honey Coffee and Honey Orange. But the nation’s ice cream tastes must have changed over time because these pints have all been discontinued. We get why for most of them, but French Vanilla, Chocolate Fudge and Mint Oreo? We’d happily eat those any day!

7. There’s a B&J’s scoop shop in Rhode Island that sits on stilts above the Atlantic Ocean.

Even the fish deserve to get their ice cream. That’s why Ben & Jerry’s Bannister’s Wharf Scoop Shop is sitting right above the water in Newport.

8. You’d be jealous of the Ben & Jerry’s headquarters.

The Ben & Jerry’s headquarters in South Burlington, Vermont features a nap room and a slide. Because of B&J’s dog-friendly policy, you can also find pups roaming around in the office all day long. Plus, so many frozen treats in the freezer!

What Your Favorite Ice Cream Flavor Says About You