What It’s Really Like To Visit The North Pole 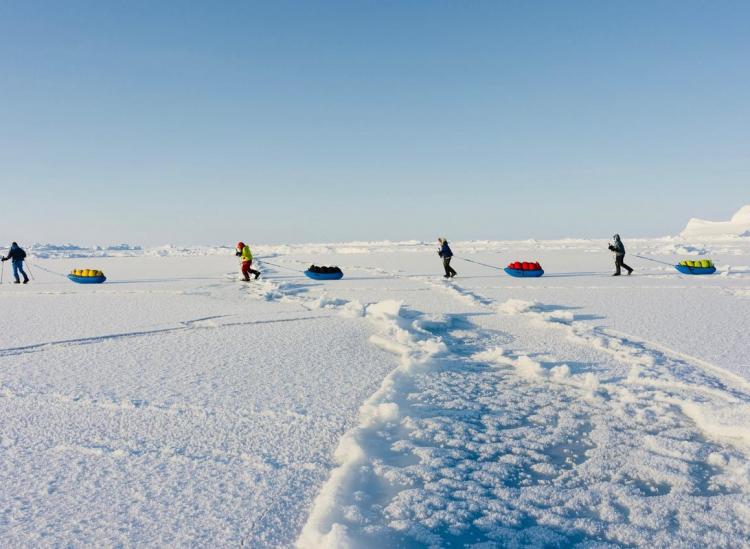 In holiday storybooks, the North Pole conjures magical images of Santa Claus, flying reindeer and elves in pointy hats hard at work to make Christmas dreams come true for excitable children around the world. But the North Pole isn’t a solid, snowy place with a candy cane-striped sign marking the spot of the earth’s most northern site. The real-life North Pole is an ever-changing Arctic seascape in international waters — a place that intrepid explorers set their sights on reaching during the one month of the year when the climate is hospitable for trekkers.

There are only a handful of guides who take snow-loving, adventurous travelers on North Pole missions during this short window each year. (And no, it’s not Christmas time. It’s usually in April.) Switzerland native Thomas Ulrich is one of these outfitters with 20 years of polar exploration experience under his belt, sometimes spending months at a time in the Arctic. He told us all about the process of getting to the North Pole, and it’s no jolly jaunt in Santa’s sleigh.

You can reach the North Pole setting out from Canada or Siberia, but that means crossing treacherous sections of frigid Arctic water and cross-country skiing over hundreds of miles while pulling a heavy sled. Most commercial trips like Ulrich’s begin about 75 miles from the geographical North Pole, a 10-day trek on foot with only tents and thermal sleeping bags for shelter each night. However, even getting there is a lesson in Arctic endurance.

Travelers have to fly to Svalbard, a northern Norwegian archipelago that’s infamously home to more polar bears than humans. From there, you hop a flight on a Russian airplane to a runway specially built and supplied by skydivers and parachutes in the middle of the Arctic Ocean, a makeshift airbase that only exists for the month of April.

“Suddenly, you land out there with the plane, and you just have ice around you and big chunks of ice blocks and beautiful light, open leads with black water,”Ulrich said. “Then you realize, ‘Oh my god, I’m just on frozen water…’ There is just like one meter and two meters of ice or even sometimes less. And now we’re going to hike here.” 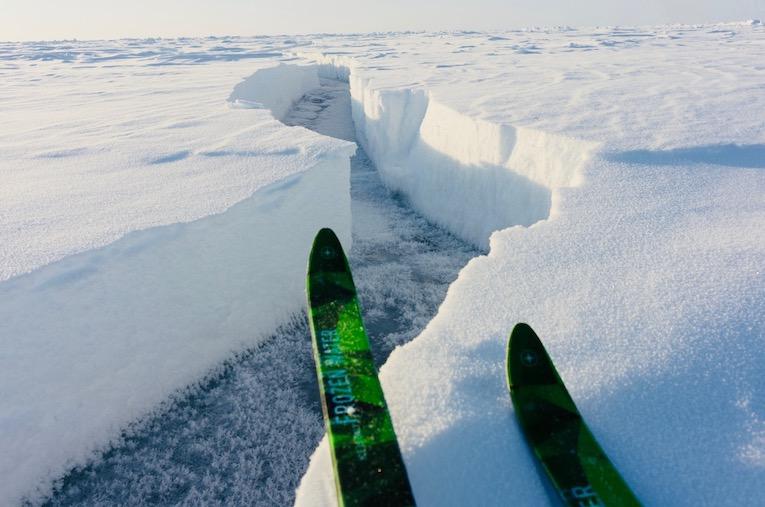 The trek is 75 miles of cross-country skiing across snow, ice and occasional glimpses of water. Under your skis and beneath the ice is 4,000 feet of Arctic Ocean water. Around you, you see thousands of kilometers of ice and the icescape is constantly changing because of the light or the wind or the ocean currents (or a combination of the three).

“For somebody who is out there for the first time, it’s breathtaking because you really feel being on Mars,” Ulrich said.

Mark King, a Seattle-based traveler, went on Ulrich’s expedition last April and echoed that sentiment. “The stark beauty of it is just incredible. To stop and look around and see that much snow and ice, it’s like you’re on the moon.”

But unlike a gravity-free outer space adventure, you do have to contend with weight on a North Pole expedition. Guests on Ulrich’s trips pull 100-pound sleds packed with gear behind them while they ski, covering relatively short distances each day because of the challenging terrain. Ulrich said it can sometimes take an hour or two to cover a single kilometer (about half a mile).

“You could be skiing on relatively flat stuff and you might get into an area the size of a football field or two that’s got almost like ice balls ten feet high,” King said, adding that working his way through boulder fields of ice was one of his favorite parts of the trek. “And then you have to navigate through that.”

Making it to the North Pole requires serious outdoor skills. You can’t use a normal compass because the magnetic North Pole, the one a compass points to, is actually in northern Canada — an entirely different direction. So guides like Ulrich use a combination of GPS technology, the sun’s position in the sky and the wind. And you’re also traveling over sea ice, which means you’re technically floating. That ice can drift under your feet — and not always in the direction of the North Pole.

“Sometimes you pitch your camp in the evening… and the next morning after seven or eight hours of sleeping… we drifted like three kilometers back in the wrong direction,” Ulrich said. “Then you have to walk for a couple of hours to even reach the place again where you stopped the night before.”

Ulrich called these experiences “special” but admitted that first-timers often find it “frustrating.” But what can you expect walking through one of the last unexplored destinations on the planet?

The North Pole is one of the only places in the world where you’ll see few traces of human civilization. It’s completely ruled by the elements.

“You’re in a wild, lonely place so you have to be prepared for uncertainty.” But Ulrich maintains it’s not a high-risk trip. “The most dangerous situations on the Arctic Ocean are the polar bears and open water.”

And both of these hazards are avoidable, with Ulrich plotting routes and occasional detours to avoid crossing thin ice or open water and carrying equipment to protect the camp against bears.

Comparing his North Pole tours to other snow-filled adventures on many people’s bucket lists, Ulrich said the North Pole is vastly different than visiting Antarctica due to the ever-changing icescape (and lack of penguins). He also said it’s much safer than an attempt to climb Mount Everest and more approachable for people who haven’t tackled major mountains around the world. Although, many of his clients are aiming for the Explorers Grand Slam: summitting the highest peak on every continent and visiting the North and South Poles.

“I always say you don’t have to be an extreme sportsman,” Ulrich said. “But what is very good is if you have a little bit of outdoor skills or you have been camping outdoors already. Or if you’re a cross-country skier. That’s the best, for sure.”

For wannabe polar explorers, Ulrich recommends starting with couple hour-long hikes — “You don’t have to go fast, but keep going, keep going. It’s very important.” — and building up to day-long treks. Ulrich’s personal training regimen for months spent in the Arctic is a bit more intense to prep for weeks of pulling a 400-pound sled; he routinely carries car tires on his training hikes. But he said your training isn’t as important as your attitude at the North Pole.

“It’s uncomfortable out there. It’s cold, it’s windy, and in the morning, you don’t want to leave the warm sleeping bag. But you have to,” he said. “So you have to be ambitious. That’s the more important part.”

If you’re curious, when Ulrich says it’s cold, he means it. April temperatures are milder than the brutal winters but still can reach negative double digits. Client King said “just the slightest wind can be pretty uncomfortable,” even under layers of cold-weather gear. You have to be ready to persevere.

“Most people who go with me to the North Pole get quite a good lesson for their life at home: not to give up right away if something is not working perfect, just keep moving, keep trying and it will work out,” Ulrich said. “That’s what the North Pole definitely tells you.” 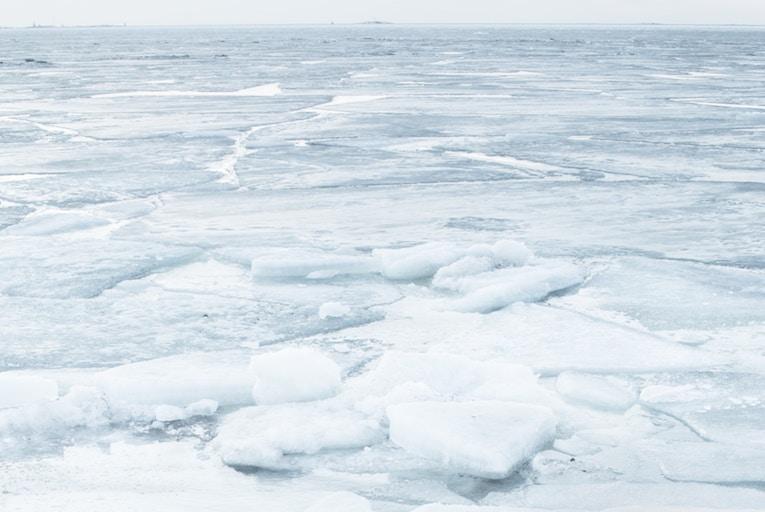 So let’s say the cold doesn’t bother you and you’re ready to strap on some cross-country skis. Like trips to Antarctica, a visit to the North Pole doesn’t come cheap. Ulrich’s all-inclusive trekking tour starts at about $50,000. If you want to visit the North Pole during the warmer summer months, there are cruises to the Arctic when the ice melts enough for ships to pass through the water. Quark Expeditions and Polar Cruises both offers spot starting at $30,000.

Beyond the out-of-this-world price barrier, visits to the frozen North Pole might be numbered.

“This is one of the most remote places in the world you can go and the opportunity is still on,” Ulrich said. “In 20 years, it might not be possible to visit the North Pole anymore — we don’t know.”

In the past 30 years, 95 percent of the thickest, oldest ice in the Arctic has melted. That’s the permanent ice that keeps things icy at the North Pole even in the warmest months of July. Ulrich himself has gathered data for studies measuring the amount of snow and ice year over year in the Arctic, showing the ice thinning. He’s seen the effects of global warming firsthand and said “the Arctic is suffering a lot,” a message he shares with the travelers who accompany him on the polar trek.

“Climate change is real and it’s affecting the ice,” King said. “If there are any disbelievers, they should go there.”

This Icelandic Beach Transports You Back To The Ice Age