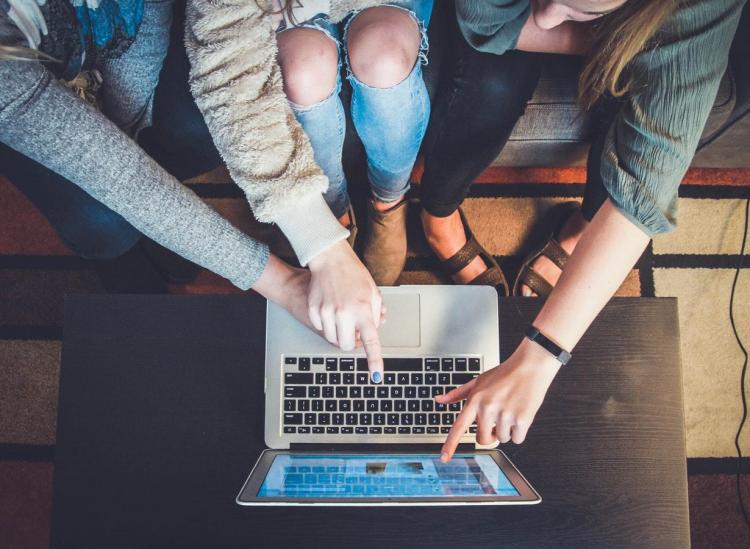 Whether you just landed your first job or you’re on your 10th, we bet you have some killer stories to share about your coworkers. Every office has a myriad of personalities, all of which contribute (either positively or — yikes — negatively) to the culture. Here are 10 types of coworkers you’ve had or probably will have at some point in your professional journey:

The Situation: He’s the one who comes into work every day and tells you about the fight he just had with his best friend or the “issue” he had to go to the doctor for. Sometimes, what he tells you is really funny, but other times it feels like you’re getting an intimate view into his life that you simply didn’t ask for. Much of what he tells you is unprofessional, and it makes you worry that others will hear what he’s saying. Even worse, it makes you wonder if your colleagues think you talk about things similarly just by associating with him.

The Solution: Try to keep your conversations with him short and sweet, and though it might seem rude, stop asking him open-ended questions about his weekend. Instead, make a statement like “Hope your time off was great!”

The Situation: She’s the first one spreading the word about an intriguing meeting your boss has scheduled, and she has no qualms about messaging the dirt to everyone on your team. You know gossiping is wrong, but you also don’t want to offend her and end up being the person she’s gossiping about.

The Solution: Whatever you do, do not engage with her gossiping. If she starts a group chat with your team to talk about someone, say politely that you can’t talk because you’re working on a huge project. If her gossiping becomes an issue for the culture of your company, or if she starts rumors about your team members, it might be time to tell your boss what’s up.

The Situation: He may be a great coworker in every other aspect, but you can’t help but notice that he’s consistently schmoozing your boss who oversees both of you. Maybe he’s always asking your boss to coffee or finishing up work that wasn’t his to finish up, and then telling your boss about it. You’re not sure if you should be doing the same just to keep up with his “performance.”

The Solution: Unless your boss is the type to reward your brown-nosing colleague for kissing ass, you probably won’t have any issues. Keep your eye on your own work and the results will hopefully have a bigger impact than waving your hands and screaming, “Look at these results!”

The Situation: She’s the first one in the office and always has a shining attitude, no matter what her morning commute was like. In meetings, she’ll offer solutions, not problems, and when she runs out for lunch, she always asks if anyone wants anything. Even if she’s not recognized for her work on group projects, she’s just happy to have been involved.

The Solution: Do anything you can to work more closely with this type of colleague! Surrounding yourself with good vibes will only make you a better coworker, employee and person.

The Situation: No matter what story he tells, he has everyone on the floor laughing. You could listen to him talk about his spring break trip from hell for hours, but you notice that you get off track when you really tune into him. You don’t want to be a party pooper and tell everyone get back to work, but you gotta get your work done.

The Solution: Whenever your comedian colleague is getting into another big story, laugh a little and then put your headphones in. You don’t have to choose between being a total ass to him and fully investing in his story. Acknowledge him, then tune out and get your work done.

The Situation: She’s always the last one to get into the office, she’s told you on a number of occasions that she’s too hungover to work and she’s not the type to jump in and help when your boss comes asking if someone wants to be involved on an important project. When you do have to work together, you end up doing everything.

The Solution: If this coworker is slacking all the time, your boss will likely take notice and deal with it. However, if the laziness is affecting your work in any way or putting more tasks on your plate, you need to tell your boss what’s going on. Document any instances in which you’ve had to take on a responsibility this colleague has dropped, or when you put the majority of the work into a shared project.

The Situation: You’re noticing that snacks keep going missing from your drawer. Another colleague mentions that her Tupperware has gone MIA from the kitchen. You can’t be sure who’s taking the shared office supplies like disinfecting wipes and pens, but you know it’s a problem.

The Solution: Most of the time, you don’t know who’s stealing everyone’s stuff, which makes it tough to find a solution that doesn’t involve pointing fingers. The last thing you want to do, though, is point fingers, so instead, tell your boss or HR department so that the problem can be addressed. If the situation continues, your best bet is to lock up your stuff every night. It’s annoying, but it’ll keep your belongings safe from anyone else’s hands.

The Situation: He’s super nice when you interact, but he throws colleagues under the bus in order to advance his own career. His tactics may be subtle. Perhaps, he claims that something you came up with was his idea, and you don’t want to make a scene by saying, “No it wasn’t!” Maybe he deflects any blame from himself when things go awry by saying things like “Well, I was out of the office when that happened…”

The Solution: If your colleague is surreptitiously out for blood, you have no choice but to keep a CYA (cover your ass) file, just in case that colleague plans to come for you. If his actions aren’t explicit, it might be difficult for you to show your boss any evidence that he’s not being sincere. That said, you can prove that you’ve been doing your job to the best of your ability.

The Situation: You know she works at your company, but you barely ever see her. Either that, or you know nothing about her outside of her job title. She never comes to the company happy hours and never engages in office chatter. If you ever get a chance to speak to her, she keeps it super simple and is unwilling to entertain a conversation beyond “I’m good, thanks, and you?”

The Solution: Ehh, just keep working? If she’s not bothering your day-to-day performance, it’s not critical to change the situation. It’s not your job to force her to open up or participate. If it’s a problem, that’s on your boss.

The Situation: Whether he just started or he’s been with the company for a while, he never seems to know when the weekly meeting is or what type of program he has to use for the responsibilities that he does every day. Sometimes it’s funny, but other times it can be annoying to have to clue him in on things that everyone else knows.

The Solution: Your first inclination might be to just stop talking to him because, honestly, it’s not your job to make sure he’s up to speed. However, you should use the good coworker card in this scenario and teach him how to lean on technology for organization tips. Maybe even show him some smart email hacks that could transform his life. That way, his phone or computer can keep him in the loop so you don’t have to.