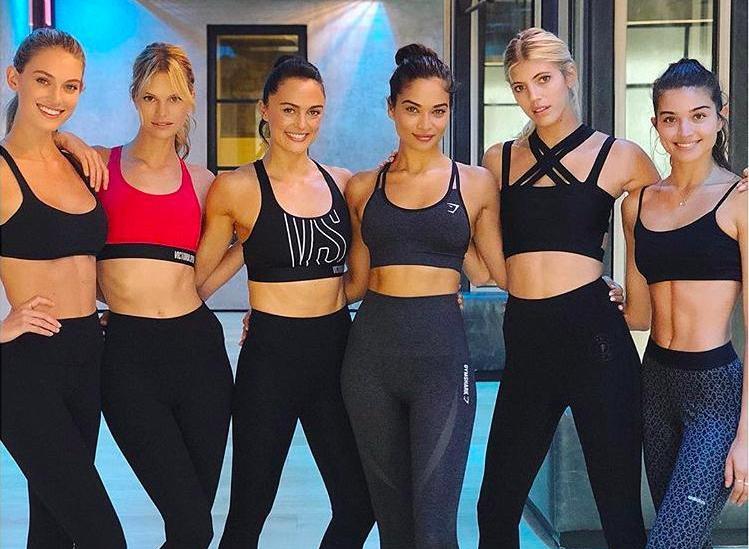 Oh, Victoria’s Secret models. They’re fit, gorgeous and fierce — it’s hard not to feel a tinge of envy when we see them strut down that runway. But what do VS Angels really have to do to look that flawless year-round? To find out, I decided to try one of their go-to workouts: Megan Roup’s new workout class called The Sculpt Society.

The Sculpt Society class is an hour-long, full-body workout that combines cardio dance moves with strength training using light weights, sliders and your bodyweight. The group fitness class, which was created by former professional dancer and now fitness trainer Megan Roup, is available for exercise lovers at boutique fitness facility Project by Equinox and is currently rolling out at select New York City Equinox locations. After its initial introduction back in 2017, The Sculp Society class, which promises to help participants achieve a “long, lean physique in under an hour,” became an instant favorite among VS models, including the likes of Martha Hunt, Elsa Hosk and Kate Bock.

Given the slew of fit celebs who rave about this workout class, I decided to see what all the hype was about. I took The Sculp Society class at an Equinox on the Upper West Side of Manhattan on a Sunday morning. (I may have been feeling a little hungover due to one too many cocktails the night before, but that’s neither here nor there.) As a frequent weightlifter, I initially brushed the class off as “easy,” thinking that it was just another cardio dance class, so I wasn’t expecting it to be particularly challenging. Boy, was I wrong…

Upon entering the class, I immediately noticed the fitness status of other participants. I’m talking ladies in their sixties with sculpted abs rocking sports bras. (To be fair, this is the kind of crowd that you would expect at an Equinox on the Upper West Side, but still.) Most people had already claimed their spot on the studio floor with a yoga mat, 2 to 3-pound dumbells, ankle weights and signature The Sculpt Society sliders by their sides. I followed suit and rushed to get my own equipment.

The class started with a dance-inspired cardio warmup, complete with jumping jacks, side shuffles and twirls (which were especially hard for my slightly-throbbing head). After this 10-minute warmup, the sculpting portion of the class began. Using our 2 and 3-pound dumbells, our instructor led us through the arm-sculpting segment of the workout. With high reps and our low weights, we worked on toning our triceps, biceps and shoulder muscles. As someone who’s used to lifting heavier weights for fewer repetitions, my arms definitely started to feel like jello after the twentieth rep.

After completing the arm workout segment, we spent the majority of the remaining portion of the class working the core, booty and legs. To target our abs, we did multiple plank variations, mountain climbers and pikes using The Sculp Society sliders. We didn’t get any breaks between exercises (although I still took a few to catch my breath).

Following this core-demolishing segment, it was time to use the dreaded ankle weights. They seemed light at first, but after completing countless rounds of donkey kicks, four-legged sidekicks and fire hydrants, it felt like I had 30 pounds pulling me toward the floor.

The last 10 minutes of class were dedicated to a quick cardio burst (similar to the warmup) and stretching, after which we all attempted to wobble out of the studio.

Although I had arrived in a zombie-like state, the dance party music combined with the sweat-inducing moves gave me a jolt of energy. I felt like I was ready to take on the rest of the day. I wasn’t sore yet, but I did feel like I got a solid full-body workout (especially for my arms and abs). I did feel slightly dejected because I had to take breaks during certain exercises, as well as modify some of the moves. But it was my first time taking the class, and anyone who’s trying out a new workout should cut themselves some slack.

The Sculpt Society class is great for those busy bees who are looking to work on their cardio and strength training in a single hour-long session. It’s not so great for those who are uncoordinated (like me) and those who have trouble following choreography (also me). Also, even if you’re taking this class, we’d still recommend that you lift heavier weights — ones that you can’t lift for more than 12 reps before failure — to see and feel significant gains in muscle strength and mass (because that’s how you really get that “toned” look that those VS Angels are rocking on the runway).

Pro tip: If you decide to try The Sculp Society at an Equinox location, make sure that you get to the studio early. Classes get pretty crowded, so it’s wise to carve out a little space in the studio for you and your equipment so that you’re not constantly bumping into your neighbor during the “dance cardio” portion of the class.

This Is Why You Will Never Look Like Your Favorite Celebrity

Here’s The Scoop On The ‘Supermodel’ Workout