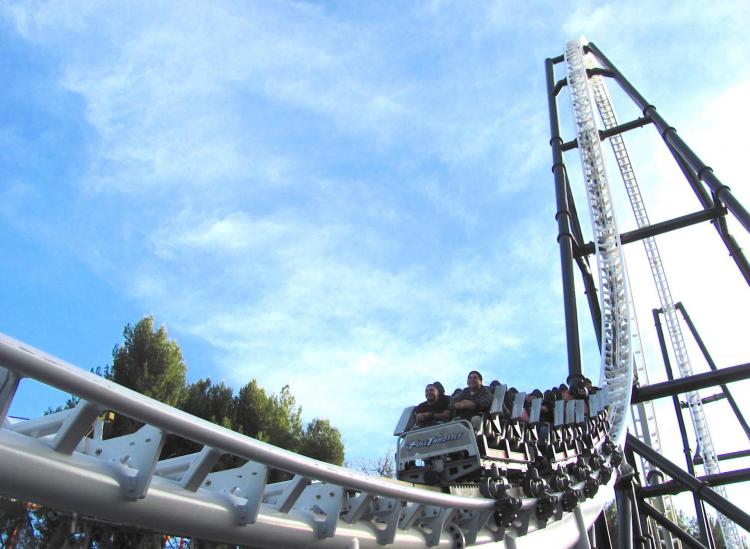 There are two types of people: those who love speedy rides and those who shudder at the mear mention of a roller coaster. If you fit into the former category, you might want to consider riding one of the seven thrilling roller coasters on this list. Each one is terrifying in its own way and we bet that they’ll all make you scream bloody murder. Do you have the guts to ride these coasters?

Spoiler Alert: This article includes specific info about what thrills you can expect to encounter on each ride. It may give you goosebumps.

This steel roller coaster has one of the world’s tallest vertical loops. It puts riders upside down at 160 feet in the air. Riders can expect to spin around this giant loop twice — the first time forward and the second time backward. You won’t have a chance to get yourself settled once this ride begins, because the roller coaster car gets launched directly from the station at 70 miles per hour. The ride lasts less than two because that’s all it needs to knock your socks off.

Takabisha is the world’s steepest roller coaster with a 121-degree drop angle. The worst (or best) part? It comes to a painfully slow stop right before it drops, so riders can enjoy the terrifying view below before plummeting into head first. We dare you not to scream during this ride.

Yukon Striker is like the mother of all roller coasters. With a height of 223 feet and a length of 3,625 feet, it’s the world’s largest and longest roller coaster. It’s also the world’s fastest dive coaster — a group of roller coasters that have one or more near-verticle drops that are approximately 90 degrees — with a maximum speed of 81 miles per hour. This roller coaster will open at Canada’s Wonderland theme park in May 2019.

When a roller coaster is named after a giant green monster, you know that it’s going to be scary. This topsy-turvy coaster has a total of seven inversions and two subterranean trenches. When it begins, the ride tricks you into thinking that you’re slowly climbing up to a drop like in most regular roller coasters, but then all of a sudden you’re shot up from 0 to 40 miles per hour in the span of two seconds, reaching a top speed of 67 miles per hour. Yikes!

This terrifying roller coaster doesn’t give you a second to get comfortable. It starts by blasting riders out of a 675-foot tunnel. The ride then reaches a height of 377 feet before descending into a 6.5-second drop at 100 miles per hour. It’s the fastest and tallest roller coaster in the Southern Hemisphere and the fourth fastest ride in the world.

This roller coaster’s name already makes it sound terrifying: when we think of “The Smiler” we imagine a creepy clown that’s out to get us. But The Smiler proves equally terrifying in its creation. For starters, there’s creepy music playing when you ride it, which makes the whole experience even scarier. The Smiler holds the world record for the coaster with the most inversions, with a total of 14 inversions throughout the entire ride. We don’t recommend eating cotton candy before riding this bad boy.

How To Recreate 7 Of Your Favorite, Most Indulgent State Fair Foods

Is The Minnesota State Fair The Best In The Country? Oh Ya, You Betcha