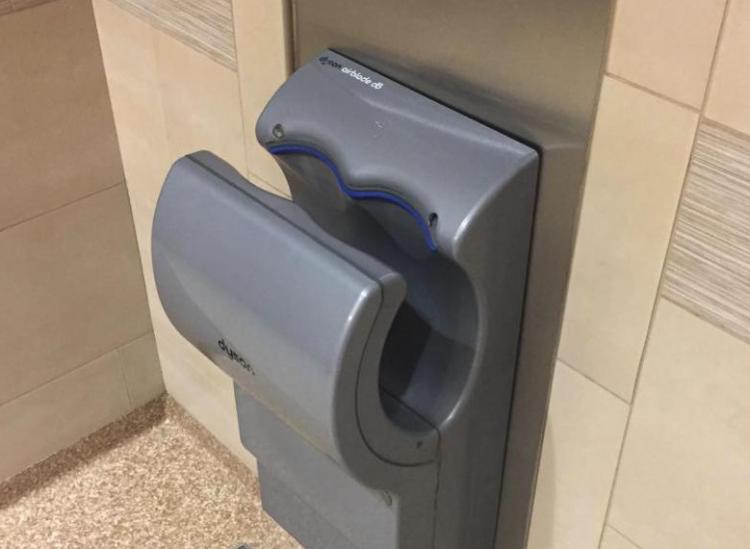 Okay, so we need to have a little chat about those hand dryers in public bathrooms. You know, the things that everyone on the Internet is freaking out about due to their propensity to spew fecal matter into the air rather than leave both your hands and the surrounding space perfectly pristine.

The original study that led to all of the digital outcries explored how paper towels, regular warm-air dryers (the kind you wave your hands beneath) and Dyson jet-air dryers specifically (the kind you stick your hands directly into) stack up when it comes to hygiene. So right off the bat, we have to clarify that the dryers that are supposedly so disgusting and risky to use are actually one specific model of hand dryer. That model definitely isn’t used everywhere.

Next, the researchers pulled on some rubber gloves and literally dipped their hands into a bath of MS2 virus. Don’t worry, it’s harmless to humans. They just need to map the distribution of the particles to prove their point. However, when have you or anyone else you know dunked your bare hands in a toilet full of number two before proceeding to wash your hands? Never, that’s when.

To make the study even less realistic, before testing the dispersal of the virus, the researchers didn’t wash their hands. They simulated the hand-washing process by shaking their hands a bit before using each drying method. Now, we know far too many people don’t wash their hands IRL when they use the bathroom (gross, people) but they definitely don’t have this much crap just sitting on their hands even on their dirtiest of days.

So when it came time for the actual drying tests, of course, the Dyson dryer released that many more particles into the air. The jet airstream is easily the strongest of the two hand dryer options tested, and there was a shitton of stuff on those hands to share with the surrounding air.

We’re not saying that hand dryers are entirely hygienic or that they don’t fling residual poop matter around that public bathroom. We’re just saying it’s nowhere near as bad as the Internet might have you thinking it is. And if people wouldn’t just properly wash their freaking hands in the first place, this wouldn’t even be an issue to discuss.

Airplane Bathrooms Are Disgusting, But Airport Terminals Are Even Worse