You Can Walk Inside A Globe At This Boston Library 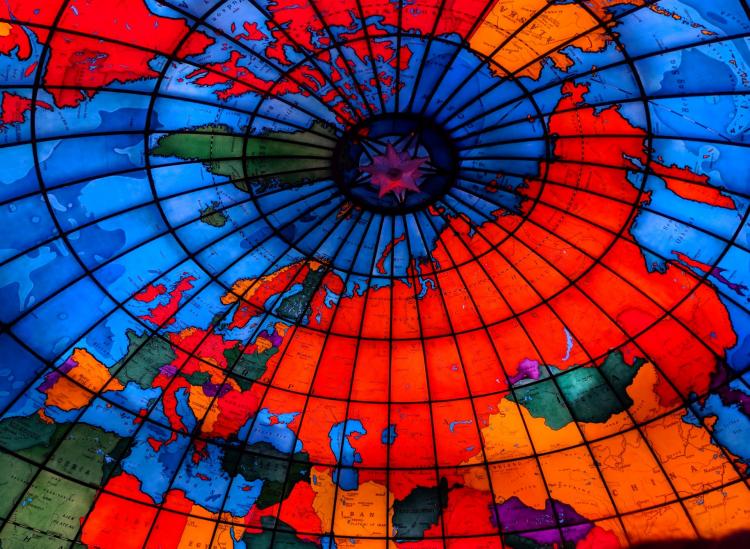 Hidden within a library in Boston, you’ll find a gigantic globe. But there’s something unique about this map: It’s inside out, meaning you can walk right through it and look at our world from an entirely new perspective.

This geographical creation is the Mapparium, located inside the Mary Baker Eddy Library near Northeastern University. It dates back to 1935 and is made entirely out of glass. (Yes, it’s very fragile.) When you go on a tour through the globe, you receive a warning to keep ahold of your belongings so nothing falls and shatters the masterpiece.

The Mapparium was created in the 1930s and, at the time, it cost $30,000 to build. Now, taking inflation into account, that’s the equivalent of more than $500,000. Since the building that is now the Mary Baker Eddy Library was the center for Christian Science Publishing and the Christian Science Monitor in 1935, the globe was designed to be a centerpiece feature of the newspaper’s home. It was inspired by a 12-foot globe at the New York Daily News — architect Chester Lindsay Churchill just decided to go above and beyond that simple concept.

With a glass walkway leading through the three-story map, you can stand in the middle of the globe and see the entire world, illuminated by LED lights behind the stained glass.

The globe is also a time capsule. The Mapparium’s actual map hasn’t been updated since the 1930s, meaning it’s just a tad out of date. Just think of how the world has changed since 1935. World War II. The Cold War and the breakup of the USSR. Many former European and American colonies finally gaining independence. You’ll see countries on the map like Yugoslavia and Siam. But even though the political borders are a mess by today’s standards, everything is accurate on a size scale.

RELATED: The Number Of Countries That Didn’t Exist When You Were Born Is Staggering

It’s a little jarring as an American to see the size of the United States on a to-scale globe. Most international maps cut the rest of the world in half to feature the U.S. front and center. But at the Mapparium, the U.S. is its proper size, which means it looks tiny compared to Africa and Russia.

Besides the stunning visuals, the Mapparium is also an audio adventure. The spherical shape of the room means the acoustics are wild. If you and a friend stand on opposite sides of the room and whisper a message, you’ll be able to hear each other’s voices loud and clear from 20 feet away — even if there are 20 people standing in between you. And this isn’t all talk; we tried it and it worked, spookily but perfectly.

If you stand in the middle of the room, the sound bounces off the round walls and immerses you in crystal clear sound. It’s a little bit alarming. We nearly jumped through the glass ceiling the first time someone’s laugh echoed around the room, horror movie soundtrack-style.

Unfortunately, we have some bad news for the ‘grammers out there. You can’t take pictures inside the globe anymore. But there’s a cheesy photo station outside the globe room where you can snap a selfie. With some twisting and a lot of practice shots, you can set up a photo that looks like the real deal — we tried it and it took a little finagling but if you’re dead-set on getting something on Instagram, it’s doable.

A tour of the Mapparium is included with entry to the Mary Baker Eddy Library ($6 for adults, $4 for kids, students and seniors). That’s basically the price of a fancy flat white at your favorite hipster coffee shop. We’d day it’s well worth it to see the world this way.

4 TED Talks That Will Make You A Better Traveler

This Boston Bakery Serves More Than 18 Flavors Of Cannolis