6 Killer Gourmet Food Trucks That Are Worth The Road Trip 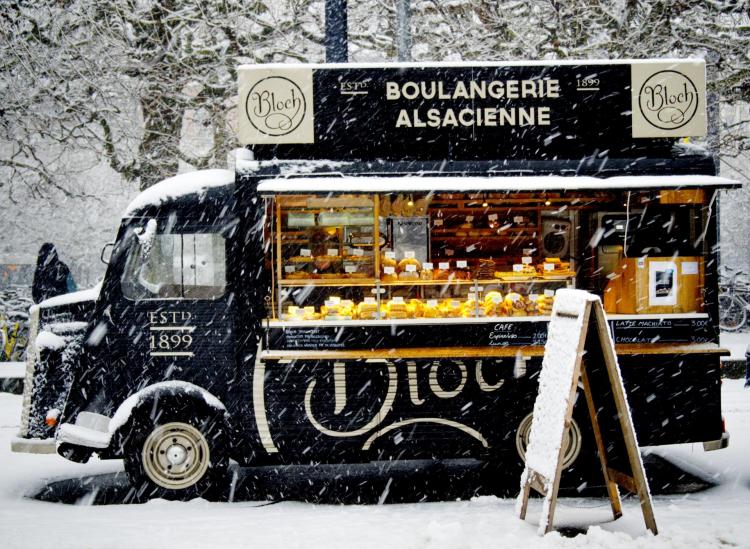 Forget waiting in line for a cushy table at a nice restaurant. Food trucks are all the rage right now. There’s just something so satisfying about enjoying a portable meal in the fresh air, especially as the weather warms up. Although some of these restaurants on wheels keep things simple, serving only a few food items, others are comparable to five-star brick-and-mortar joints. What’s more, grub sold by food trucks is usually a lot less expensive. Here are six of our favorite food trucks from across the country.

If you’re a fan of cheese and bread (who isn’t?), you might want to take a trip to Nashville to check out The Grilled Cheeserie food truck. The chefs inside serve a wide range of gourmet grilled cheese melts using eco-friendly sourcing. Crystal De Luna-Bogan, one of the co-owners of the food truck, is a Le Cordon Bleu-trained chef who has worked in fine-dining spots around the country (including the Four Seasons in Beverly Hills, so you know that this food truck must be amazing). The menu includes make-your-own grilled cheese sandwich options, where you can choose from a list of locally-sourced buttery cheeses and artisan bread, as well as specialty melts. One customer favorite is the Pimento Mac ‘N’ Cheese melt, which consists of house-made pimento cheese, cheddar cheese, macaroni and bacon bits.

For a food truck to stand out in Las Vegas, it must be hella good. The Fukuburger Truck food truck mirrors Vegas’ unique and quirky style by serving American-style burgers with a Japanese twist. On the menu, you’ll find classic burgers topped with non-traditional toppings like wasabi mayo, teriyaki and the chef’s own secret “crack sauce.” The food truck is so popular that its co-owner, Colin Fukunaga, decided to open up a brick-and-mortar location in Las Vegas’ Chinatown district.

The founder of this food truck has an interesting story. Luke Holden grew up in Cape Elizabeth, Maine, surrounded by fresh seafood. He was born to a fisherman father who was a lobster processor, so his love for all things lobster started early. After graduating from Georgetown University, however, he decided to move to New York City to work as an investment banker. He found that while the city didn’t lack people, it did lack affordable lobster joints, so he decided to start his own. Thus, Luke’s Lobster was born.

The food trucks serve up lobster rolls, crab rolls and shrimp rolls all for under $17. You’ll also find seasonal specialties like lobster grilled cheese and plenty of creamy soups for the winter. If you go, try Luke’s Lobster Roll, which consists of a quarter-pound of chilled, wild-caught lobster in a split-top bun with lemon juice, melted butter, mayo and the joint’s “secret seasoning.” Since arriving on the food truck scene in New York City, Luke’s Lobster food trucks have started circulating in Chicago, San Francisco, Maine, Las Vegas, Philadelphia, Miami, Maryland, Boston, Washington, D.C. and even internationally in Japan and Taiwan.

This cupcake food truck was co-founded by two sisters, one of whom was fighting blood cancer at the time. For Kathryn and Laura Pekarik, baking cupcakes offered an escape from the reality of the diagnosis. To this day, for every cupcake and food item that is sold from their two food trucks and at their two brick-and-mortar locations, part of the proceeds are donated to finding a cure for blood cancer and increasing awareness of the disease.

Cupcakes served from the Green Machine are made 100 percent from scratch. Each day, the food truck offers 13+ different cupcake flavors, two of which are always gluten-free. You’ll find classic cupcakes like strawberry shortcake, as well as an original rainbow swirl buttercream cupcake named “The Survivor.”

The Yumbii food truck offers a blend of Asian and Mexican flavors for both lunch and dinner. On the menu, you’ll find items like stir-fried tofu tacos, Asian rib-eye beef burritos and spicy pulled pork quesadillas. The food truck’s signature sesame fries are sprinkled with a splash of sesame oil, salt and chili flakes. Yumbii received so praise from customers for their food truck that they decided to open their first brick-and-mortar location, the Yubii Taco Shop, in 2017.

The Border Grill food truck was co-founded by Marie Sue Milliken and Susan Feniger, two Top Chef Masters contestants. The chefs modeled their food truck after their successful upscale brick-and-mortar Border Grill restaurants, and the menu consists of modern Mexican cuisine. Their tacos, quesadillas and salad and burrito bowls are made with seasonal, locally-grown ingredients.

Here Are 10 Of The Greatest Food Festivals In The Nation

Eat Your Way Through America: Here’s The Most Iconic Street Food In Every State