The Southern Brewery Tour Every Beer Lover Needs To Experience 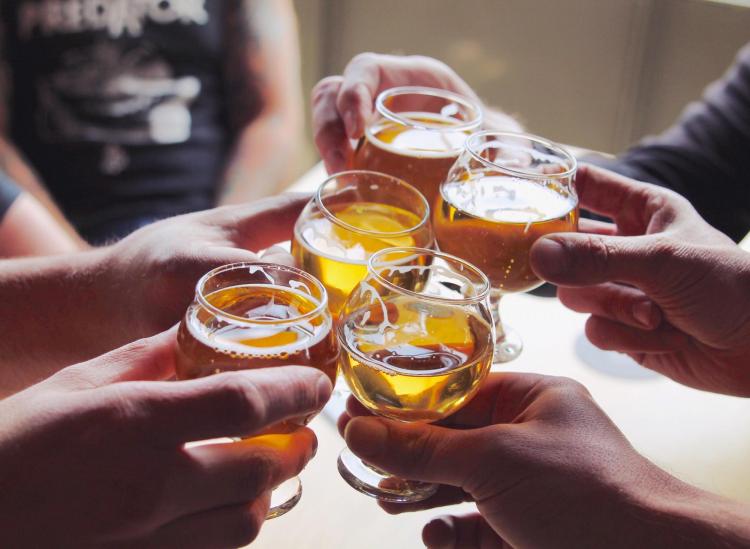 If you’re a devoted fan of IPAs, sours or stouts, then you’ve probably heard that Asheville, North Carolina should be the next hop-filled stop on your travel bucket list. Beer City USA, as some call it, is home to more than 30 local breweries, as well as outposts for big-name brands like New Belgium Brewing Company and Sierra Nevada Brewing Co. The creativity among the brewmasters in this southern mountain town is unmatched, which is evident as you hop from microbrewery to microbrewery and experience all of the different local flavors of Asheville. Don’t believe us? Here’s a handful of craft breweries you can’t miss when spending a long weekend in this charming hippie haven.

A unique name for a brewery, Bhramari was the world’s first word for “black bees” and is the Hindu Goddess of bees. The team uses these origins as inspiration to play with flavor and ingredient combinations, creating some of the most genius brews in town. This is the kind of brewery that will challenge all of your preconceived notions about beer, the types you love and the types you don’t. Not to mention, the food menu is just as enticing. May we recommend a flight (because you can’t pick just one of the beers here) and the burger? You won’t be sorry.

This brewery’s goal is simple: Brew beer that people want to drink on a regular basis. And while that focus keeps their brews approachable, it doesn’t mean that they’re afraid to get a little innovative when the beer warrants it. Hi-Wire brews traditional styles and experiments with barrel-aged sours and wild ales, so there’s something on tap for every palate and preference. And its drinking space is low-key and entertaining, making for an easy, well-paced stop along your Asheville brewery tour. Try the lime basil sour if it’s in when you arrive — it’s one of the best in town.

This kitschy brewpub joined the Asheville lineup in 2013, and it’s now one of the must-visit stops along the South Slope for beer drinkers who prefer full-flavored , rich lagers smooth stouts. It creates the epitome of a community feel, which is noticeable with how many locals prefer and frequent the brewery each week. Plus, each can is a work of art — you can even read the story behind what inspired that particular batch right on the label. You can’t tour Beer City USA without snagging a dark, intense brew at Burial.

Independent and family-owned since 1994, Highland Brewing Company was the first legal brewery in Asheville since Prohibition and really helped carve out the path for this North Carolina locale to become the craft beer hub it is today. From Gaelic-style ales to fruity and citrusy to crisp pilsners, Highland has a brew for everyone to enjoy in its robust indoor-outdoor space that also offers live music performances six days a week.

You can find the downtown location of One World Brewing by walking down an unsuspecting alleyway and heading down a semi-dingy flight of stairs. At the bottom, the smell of damp earth greets you at the door, as if you’re about to hang out in your best friend’s unfinished basement. They like their hops at One World, keeping plenty of on tap for you to try. But if you’re in the mood to veer off the beer path for a moment, we recommend giving their house-made blackberry mead a try. With plenty of bar games on the tables and eclectic bands booked throughout eek, this will be a quintessential Asheville stop on your tour.

You’ll also find this boutique craft brewery along Asheville’s South Slope. For about five years now, Twin Leaf has provided locals with classic ales and adventurous lagers alike, and its beautiful downtown taproom makes for the perfect beer-sipping atmosphere. You won’t find a full kitchen menu here like some of the other stops on this list, but you still need to stop in and check out which seasonal brews are on rotation.

Another South Slope mainstay, Catawba Brewing Company proves its strength in virtually every beer category. There’s something for the hop fans, the stouts are rich and flavorful and the White Zombie white ale pairs well with pretty much anything. But if you get a chance to pop by this fun hangout, do yourself a favor and try the Peanut Butter Jelly Time — literally the beer version of your favorite childhood (or hell, adulthood) sandwich. Better yet, they have a handful of renditions to give you all of the jam options you could possibly desire, so go ahead and get the flight and try each one. When you’re done, head outside and check out which local food truck is offering the eats of the day.

Last but not least, we have Wicked Weed. While plenty of locals were pretty pissed when Anheuser-Busch bought the brewery in 2017, we still think it’s worth a stop on your Asheville brewery tour. Better yet, head to the Funkatorium, its second location (also on the South Slope) that houses all of the sour and funky beers — and there’s a lot of them. We know we’ve already told you to have two flights on this tour, but you probably need a third to experience just how diverse the world of sour beer can be. And while you’re at it, check out the food menu. Both Wicked Weed and the Funkatorium have some tasty eats (like the fried chicken sandwich) that you definitely don’t want to miss while down in the south.

How To Pair Your Favorite Spicy Foods With The Right Beer

Want To Love Your Beer Even More? It’s All About The Glass