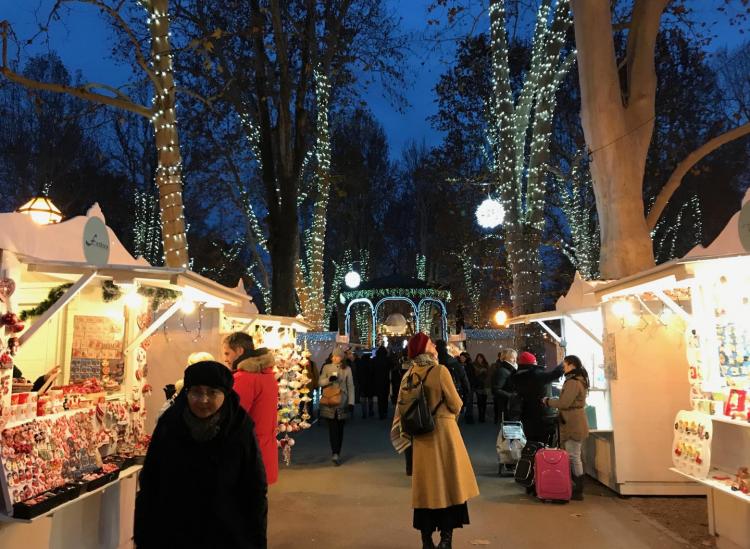 It’s official: For the third year in a row, Zagreb, Croatia is home to the best Christmas market in all of Europe.

To win the award from European Best Destinations, Zagreb beat out strong contenders like Vienna and Munich. But could the Croatian city’s lauded holiday display possibly live up to the hype? We took a wander around Advent u Zagrebu this December to check it out for ourselves.

The first thing you should know about Zagreb’s market is that it’s not one little Christmas village. Advent u Zagrebu extends over entire swaths of the Croatian capital city that are completely decked out for the holidays. (Note: Croatia is a majority Catholic country, so we’re mostly talking about Christmas here.) There are countless displays throughout Zagreb’s various Old Town and New Town neighborhoods, all twinkling with lights, open-air fire pits and Christmas decorations.

The entirety of King Tomislav Square, sandwiched between Glavni Kolodovr and the Art Pavilion, becomes the postcard-worthy Ice Park for the month of the Christmas Market. Ice rinks fill the square, with one winding around for the speedy folks and a bigger one in the middle for those who don’t need to race. When you want a break from the ice, there are glass-walled vendors selling warm drinks and sustenance to help you keep up your skating strength.

Circus pendants will catch your eye as you follow the crowds to the next party up from the Ice Park. Strossmayer Square has an igloo-like concert venue, hipster food stalls and cozy firepits. Oh, and plenty of curated photo ops. There’s an old-world carousel, a bedazzled Volkswagon van and a pair of those Instagram-favorite angel wings. You could also grab your sweetie and pop into the kissing point for your own Hallmark holiday movie moment.

Here you can join “Fuliranje kod Uspinjače” or “Fooling around the funicular” — although, this year, the fooling doesn’t happen right next to the train heading uptown. This is where you’ll grab your craft beer, chic souvenirs and join holly-jolly throngs of young people. If you want your food served out of an antique truck, Fuliranje is your spot.

Zagreb’s Zrinjevac Square is where the market reaches full fairytale status. Trees are wrapped in icy blue lights, and the sparkling main pavilion hosts local bands inside its glittering glow. If there’s not a show at the moment, grab a snack to munch on. You’ll find sausages and beer sold next to traditional desserts and candy stores. Keep an eye out for horse-drawn carriages along either side of the park, and don’t forget to look up at the Austro-Hungarian architecture lining the streets.

Just a couple of blocks up, Zagreb’s main square bridges the lower and upper sections of the city and leads to the incredibly tourist-friendly Tkalciceva Street packed with bars and restaurants. It’s not as quaint as Zrinjevac, but it can pack in a bigger crowd for the concerts.

On the far side of the square, there’s another little village of vendors called the European Square, where you’ll find live bands and stalls reminiscent of the Western European markets.

Turn away from those beckoning bars on Ulica Tkalciceva — you’re not done with the Christmas-ing yet. We’re going uptown. But before you take a left from Jelačić and then another left, just know that uptown in Zagreb isn’t just directional — it’s literally the high ground of the city. Up the stairs we go!

Along Strossmayerovo Šetalište, you’ll find vendors striped in red and white with tinsel and holly and string lights galore. The views along this street showcase some of the best of the city. And bonus points if you snap a photo with the metal man statue of Antun Gustav Matos. Posing with the Croatian poet is kind of a thing here.

And there’s even more…

Feeling a little overwhelmed by all the Christmas spirit? We understand. We were wandering around a little wide-eyed in wonder, too. There’s so incredibly much to see. But here are a couple of other charming touches we loved at Advent u Zagrebu that you don’t want to miss.

You’ll want to pair your mulled wine with some Croatian donuts — called fritule — topped with chocolate or fruit jam. There are unlimited vendors supplying the fried treats, so why not just test out every flavor? Afer all, it is Christmas…

Zagreb’s Soviet Era tunnel beneath the city was the site of Cold War hideouts and a 1990s rave, but for Christmas, it becomes an underground Advent adventure and a colorful mini replica of the town.

While we’ll admit we haven’t seen every top-ranked market in Europe (#goals), Zagreb is pretty freaking magical. And after experiencing the Christmas wonderland firsthand, we definitely think it’s worth every award it receives.