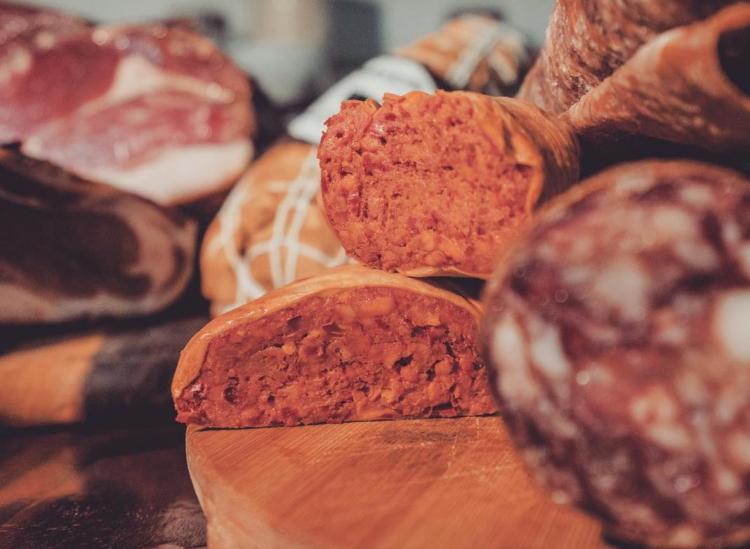 Calabria, Italy, rests at the “toe of the boot.” It’s surrounded by turquoise water, rocky coasts and sandy beaches. This region of Southwest Italy also happens to be the home to the ‘Ndrangheta, the Calabrian mafia that’s considered to be one of the oldest and most powerful of the five major mafia-like organizations to exist in the country. On top of the mafia and abundance of local agriculture, Calabria is also home to ‘nduja (pronounced en-DOO-ya): a spreadable, spicy salami that’s made using ground pork and red Calabrian chili peppers.

The name ‘nduja most likely comes from the French word andouille, which is a smoked pork sausage that originated in France and is now a huge part of Louisiana cajun cuisine. The pigs that are destined for ‘nduja are raised in the tiny village of Spilinga where they graze in a summery climate and are fed a diet of acorns, grains, chestnuts, beets, pumpkins and dinner leftovers. It turns out that pork raised on whey doesn’t age well, so this is avoided when making ‘nduja.

The meat for the spicy spreadable salami is made either using a coarse sieve (similar to a colander used for draining liquid from pasta or veggies) or chopped by hand. It’s kneaded together with salt and Calabrian chili peppers. The ‘nduja rests for a couple hours and then it’s given the official taste test. A small sample is cooked and often eaten with a piece of bread and red wine. If it gets the stamp of approval, the ‘nduja gets stuffed into a natural sausage casing, lightly smoked and aged for a couple of months to a year, sometimes more.

This special Italian ingredient is different from other types of salami because of its spreadable texture and vibrant taste. The key to making real ‘nduja is using the highest quality peppers. In Italy, the Calabrian chili pepper is way more than a pepper, it represents their culture, history and tradition. If you’re worried it might be a little too spicy for you, mix the salami spread with ricotta cheese and gently heat it up in a saucepan. ‘Nduja can be grilled, cooked in a tomato-based sauce, eaten raw, with seafood, spread on crackers, used on pizza and in pasta dishes. American cooks have adopted Calabrian methods for cooking with ‘nduja and they’ve also come up with new innovative ways to incorporate the spicy spread, like adding it to eggs Benedict, linguine with clams or seasoning bitter vegetables.