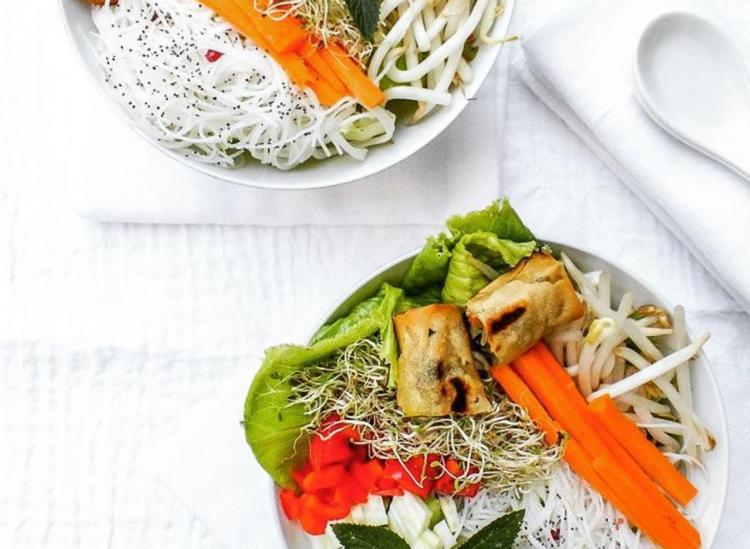 If you’re vegan and have to rely on restaurant chains for dinner tonight, you might think you’re in a bind. You can’t exactly stroll into a McDonald’s and find a bunch of dairy-, meat- and egg-free options. But thankfully, the five popular chains below have your back, so get ready for a full-on vegan feast.

In case you vegans weren’t already aware, Chipotle is where it’s at. Not only is it a favorite among barbacoa and carnitas lovers, but it offers an awesome vegan selection. To start, the company website dedicates a page to covering which foods are safe to eat for those with certain allergies or dietary restrictions, including vegan options.

Aside from some obvious sides like guacamole and salsa, the chips are also safe to eat since they’re not fried in any meat-based oil. You can also make your own burrito, taco or salad bowl sans meat and fill up on all the beans and veggies. It’s also good to note that you won’t be stuck with just lettuce, onions and tomatoes as your veggie options. Chipotle offers two different types of salsa, two types of beans, vegan chili, fajita vegetables and cilantro lime rice.

Panera is our favorite spot for that incredible soup and salad lunch combo (it has a ton of other pairings, too). Aside from being the perfect choice for when you want a cozy soup, Panera offers a lot of vegan soups, salads, sandwiches, sides and more. If you want a general overview of what’s safe to eat and what isn’t, you can check out its “Eating Vegan” page, which details every single vegan item as well as how to customize a meal that may not initially be vegan.

Some solid choices include the everything and sesame bagels, the watermelon, arugula and almonds salad, the black bean soup, the fuji apple salad without chicken and Gorgonzola, and the Mediterranean veggie sandwich without feta.

Did this one surprise you? It surprised us, too, considering the fact that Taco Bell is the epitome of fast food. Its website includes a “How To Eat Vegan” page, highlighting egg-, dairy- and meat-free ingredients, which meals are fully vegan and how to customize one of its menu items to be vegan. The most surprising part of the whole deal is that you can literally order a vegan Crunchwrap Supreme! Taco Bell’s website states that its staff is committed to personalizing any meal to accommodate patrons’ dietary restrictions.

You can order exciting menu items like the Crunchwrap Supreme without meat, cheese and sour cream, a number of burritos like the fresco bean burrito, any taco (without meat, of course), the spicy tostada without cheese and chipotle sauce, chips and even the cinnamon twists, which are not fried in any meat-based oil.

Since Subway is all about personalization, we’re pleased to include the restaurant on this list for its great vegan selection. While the company does not currently have a page on its website specifically dedicated to vegan options, there are plenty of outlets that have reported vegan-friendly choices. The good news is that there are so many vegan ingredients that you won’t have to check twice with the staff to make sure your meal is safe to eat.

Since you’re likely ordering a sandwich (it is a sandwich place after all), your first step is to choose between vegan-friendly breads like hearty Italian, Italian, sourdough and a wrap. Then you can choose from all of their veggies including shredded lettuce, tomatoes, green peppers, jalapeños and avocado. Lastly, you can opt from a bunch of their yummy sauces like yellow mustard, sweet onion sauce, fat-free Italian dressing and Buffalo sauce.

Noodles and Company is the place to go if you’re craving carbs. The website doesn’t have an immediately visible page that details all the vegan-friendly meals, but its FAQ can help clear up any reservations potential vegan customers may have before ordering. In the FAQ, the company lists come awesome entrée options that are totally meat-, egg- and dairy-free and then directs readers to a helpful PDF explaining which dishes are safe to eat.

As it happens, the majority of the company’s dishes are vegan or can be customized to be vegan. Some good menu items include the Japanese pan noodles, the penne rosa without cream or cheese, the Chinese chop salads without wontons, the Indonesian peanut sauté and the Med salad without yogurt dressing or cheese.