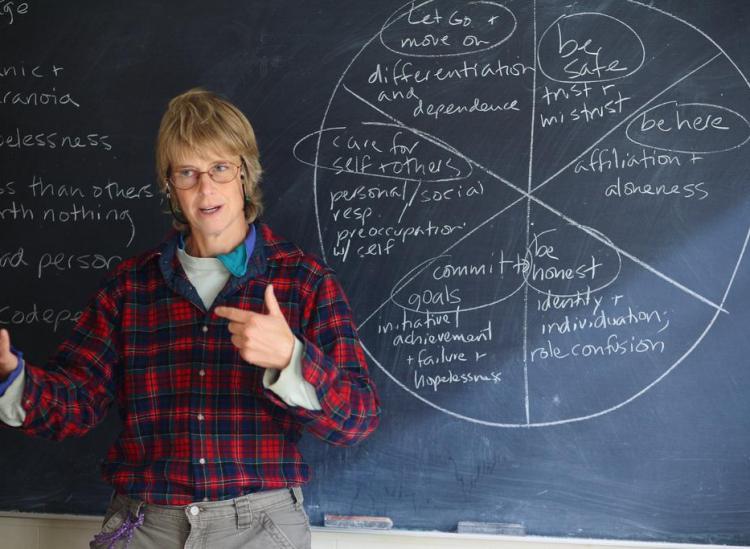 Unless you went to a ridiculously small college or university, we bet you’ve had dozens of professors during your time in school. While most of them have probably been forgotten, there were likely a few who really made an impression on you. Here are the top 11 professor personalities you couldn’t forget if you tried.

You’re not sure what sort of shenanigans he got into earlier in life, but he’s often forgetful or scatterbrained. Maybe he just has a really chill approach to everything. (For example, you ask if you can write your English lit paper on turtles and he says, “Wooow, that’s amazing.”) Having a hippie prof doesn’t always mean you get a free pass, though. It really just means you’re dealing with a one-of-a-kind prof who prefers to go with the flow. So, go with the flow.

She practically marches into class with her perfectly-organized materials, and you quickly open your book to page 53 at the exact moment she says to open your book to page 53. You wouldn’t dare ask her for any slack or a curve on your grade because you already know that she wouldn’t entertain it. However, at least you can rest assured that she’s going to play by the rules, so you know exactly what you’re getting… even if you’re scared of it. Don’t pull any tricks on this one — she sees (and grades) all.

On the first day of class, he reiterates that he’s on your side and that he’ll do anything he can to help you succeed. At first, you think he’s just being nice, but four weeks later when you ask him what you can do to raise your grade after you bombed that quiz, he says, “Don’t worry about it! What grade do you want?” Weird, huh? The most he’ll ask you to do is a fun extra credit project, but you feel like you can get away with anything. Even though he might make it easy for you to scrape by, you should earn those grades out of integrity. Trust us when we say that he’ll remember you as the one who didn’t take advantage of him.

You know her. She’s the prof who held a protest against the school administration for not funding her department as much as it does the others. She spends half of every class period persuading your class not to become a professor because of all the shit you’ll have to deal with under the “system,” and she might even hold grudges against some of her colleagues who were able to make tenure track when she didn’t. You feel awkward doing anything but listening to her rants, and unfortunately, that’s about all you can do.

He’s a talented scholar who seeks the next opportunity for funded research — maybe he had a paper published in a huge journal or he traveled the world on grants studying the communication strategy of baby elephants. What seems to be missing, though, is his love of teaching the subject he’s an expert in. You know he’s at the school for a year on another grant or fellowship, and that seems to be the only reason. Le sigh.

She’s a celebrated expert in her field. She might even be a celebrity. You can’t believe you made it into her class (there was a massive waitlist), and you can’t help but feel so intimidated to hand in work to her. If you spend the entire semester genuinely getting to know her on a professional level and putting your best work out there, she could be the person who helps you get into that insane grad school or gives you insight into her own path to success.

He may be super smart and great at teaching, but anytime he’s having a hard time, he opens up to… yep, your class. Sometimes he cries, and sometimes he asks you for advice or opens his own personal issue up for discussion. Your class doesn’t feel comfortable when this happens, but he’s well-intentioned enough that you don’t want to say anything. It’s a looong, Kleenex-filled semester.

She just graduated from her PhD program at an Ivy League school, and you only know that because she’s bragged about it dozens of times. Your class discussions are mostly one-sided, and she tells you how to think and justifies the reasoning by, again, saying that she learned it in school. You suspect that between her dissertation and your school’s decision to hire her as a junior lecturer, her ego inflated to a dangerous size. You’re not likely to take her lessons seriously specifically because she has no life experience to draw from, and because, well, she’s in year one of teaching. It seems that you’re not the only one who could learn a thing or two.

His syllabus says one thing, but he does the exact opposite. Sometimes, his unpredictability is fun. For example, you’re scheduled to take a quiz on Friday, but then this prof tells you that you’re going to spend the class period watching conspiracy videos. But other times, you pray that he sticks to the schedule just so you can prepare anything in advance. You can respect his uniqueness, but you want to make sure you can stay on track with whatever is going on in his head.

You know her name, you have the syllabus and you know all three TA’s fairly well, but you can’t actually remember what this prof looks like because she is literally never in class. She initially sent emails excusing herself because of some incident but stopped sending them after week six. You hope that the TA’s are nice graders, because they’ll be the ones reporting your performance.

This prof is the beacon of hope for all students and is the perfect combination of authoritative, fun, genuine and full of life lessons. You can come to this prof with a professional question or personal issue, and you know that he or she will know exactly what to do. You keep in touch after graduation and ask about his or her pets while he or she is eager to write you letters of recommendation whenever you need it. This prof changed your life with his or her lessons, and you honestly can say that you walked out of that class a different, better person than when you walked in.