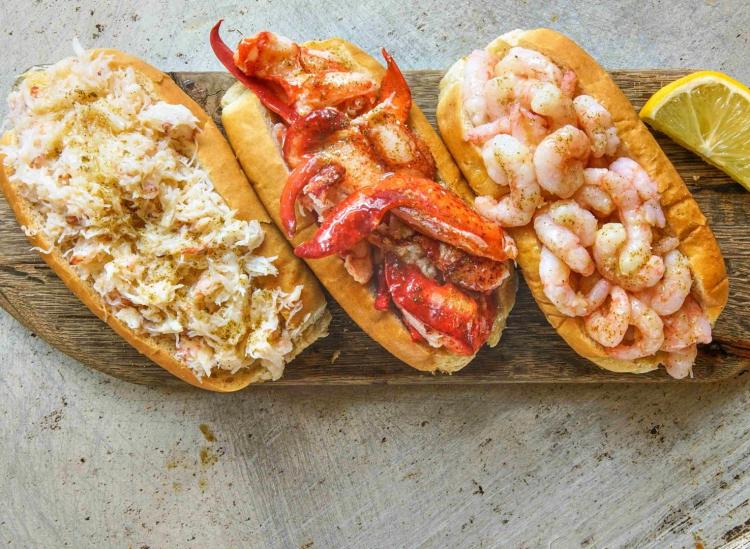 As springtime rolls around, there’s one thing at the top of our list and that’s lobster roll season. New England — which encompasses Maine, New Hampshire, Vermont, Massachusetts, Rhode Island and Connecticut — has a reputation for being the ultimate region for lobster rolls, although the rest of the country has tried to catch up. The densest population of cold water lobsters reside off the coast of Maine and they’re harvested year-round. More specifically, lobster fishing is heavily sourced in the Gulf of Maine, right around the Bay of Fundy, because it has the highest tidal variations on the planet along with cold and nutrient-rich water. There’s an ongoing debate in the world of lobster lovers on the subject of which type of roll is best. There’s Maine-style, which is tossed lightly with mayo on a buttered hot dog roll; New England-style, which is similar to Maine-style, but also includes celery, chives and other leafy greens; and then there’s Connecticut-style, where the lobster meat is sauteed or poached with clarified butter and no mayo, on a roll.

Whichever style floats your boat, there is no denying the satisfaction you get from eating juicy chunks of lobster nestled in between a slightly toasted buttery bun. In the spirit of the warmer months ahead, here’s a peek into some of the best lobster rolls across America.

Out in the Hamptons, lobster rolls are pretty much a way of life during the warmer months. Bostwick’s Chowder House, in East Hampton, is basically an elevated seafood shack that looks like it was transported right out of Cape Cod, with a cedar-shingled exterior, a white picket fence and nautical decor. The lobster roll here is one of the best. It contains a generous six ounces of lobster meat and is lightly tossed in mayo with celery and parsley. The roll is then served with fresh-cut fries and cole slaw. You might even run into a few celebrities while you’re chowing down. 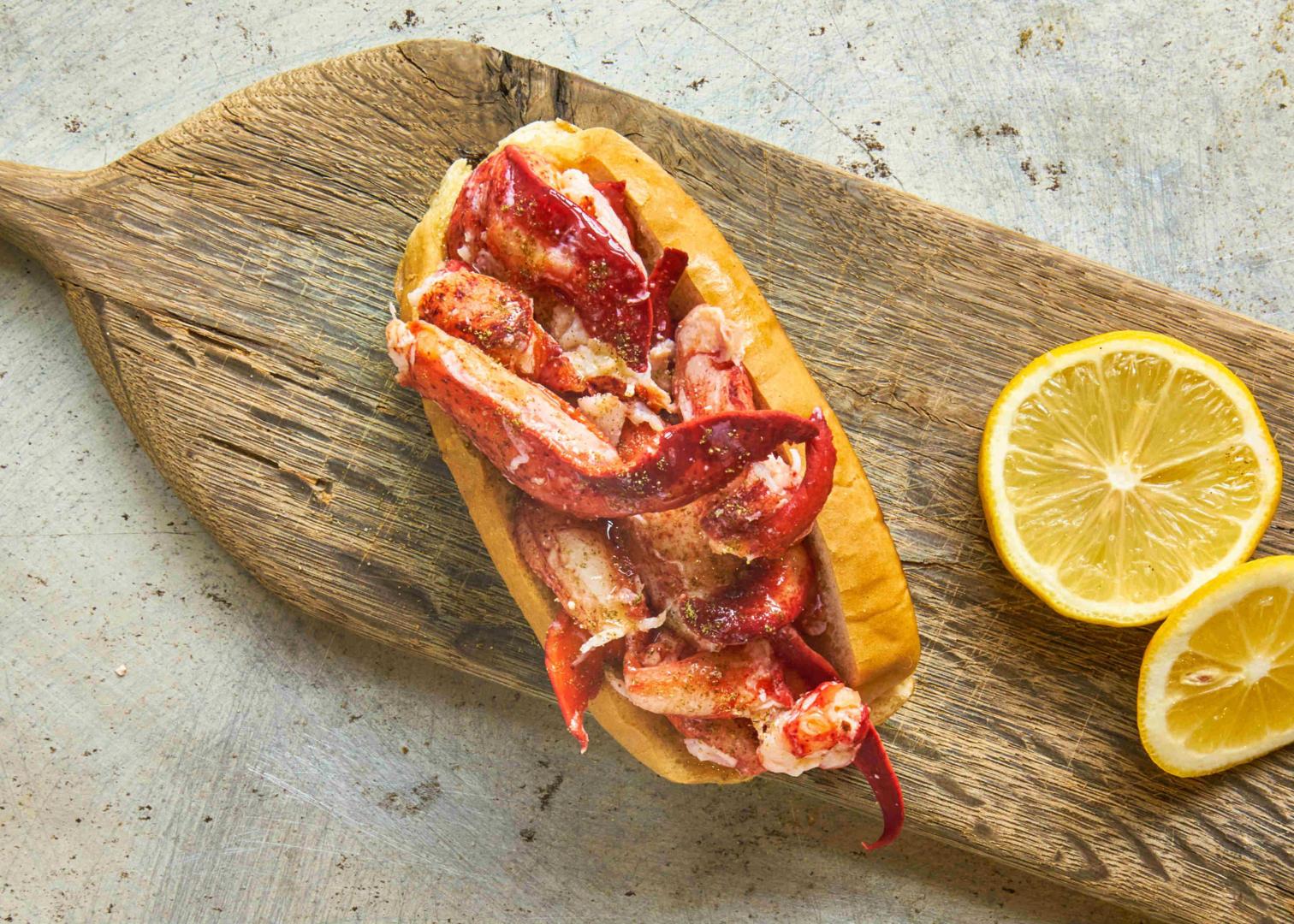 First things first, Luke’s lobster roll is pretty ideal. Each roll uses 1/4 pound of lobster meat, all knuckle and claw, which is tossed with a warm lemon butter sauce and seasoned with celery salt, oregano, thyme and freshly ground black pepper. The tender lobster meat rests inside a New England-style split-top hot dog bun that’s been toasted to golden brown buttery perfection with a little spread of mayo on each side. It takes about five lobsters to get the variety of meat Luke’s needs for one roll. The thing about Luke’s that sets it apart from the industry is its commitment to sustainable seafood practices. All of the lobster is sourced from Canada and Maine, with Maine having strict size restrictions. If the lobsters are smaller than three and a half pounds they’re called “a short” and they’re thrown back. Lobsters larger than five and a half pounds are called the “badass of the sea” and also need to be thrown back.

Luke himself is a third generation lobsterman and the business is a family affair. The lobster company, which started in New York in 2009, prides itself on traceability. Each morning, lobsterman all along the northeastern coast haul traps and nets by hand. Luke has built strong relationships with the top fisherman in the Northeast and Canada, with commitments to buying 100% of what they catch, so you’re guaranteed full transparency with the source and quality of your lobster. It’s comforting to know your lobster roll is not only delicious, but created in a trusted sustainable way. You can find Luke’s all over New York, around the country and in Japan.

This legendary fish shack in Kennebunkport, Maine, is just about always filled to the brim with a line of people waiting to get their hands on a lobster roll during the summertime. While you’re patiently awaiting your food, there’s a chance you’ll meet the owner Steve Kingston, AKA “King Of The Lobster Roll.” They have the freshest ingredients and they take really good care of the lobsters, which they then cook in sea water to preserve that fresh ocean flavor. This method gives the lobster its signature sweetness. Each lobster roll is stuffed with an entire one pound lobster (tail, claw and knuckles). You can choose between a little mayo, butter, or both if you’re up for it. The lobster meat is smushed between round locally baked buns. Each bun is buttered and placed on the griddle until it’s golden brown. Kingston’s famous roll has mayo on one side, lobster on the other and is slathered with butter right before it reaches your mouth. This is basically the gold standard of lobster rolls.

What started as a food truck has grown into a full out lobster operation in Brooklyn. During the summer, when the weather is nice, they’ve been known to sell close to 5,000 rolls in a day. Even though the menu has gotten pretty extensive, lobster rolls have remained at the heart and soul of Red Hook Lobster Pound. Customers can order the rolls two ways — you can have it warm with butter and lemon (Connecticut-style) or cool with mayo (Maine-style). It’s the lobster roll variety that make Red Hook stand out from other lobster roll destinations. The owners, Susan Povich and Ralph Gorham, didn’t want to impose their lobster preferences on customers so they give them a choice. The Lobster Pound’s loyal fanbase is living proof that the husband-and-wife duo definitely did something right. There are locations in Manhattan, Montauk and Brooklyn along with food trucks in New York and Washington, DC.

This seafood eatery started as the first legal food truck in Minneapolis, selling only their classic lobster roll and a few po’boys. There’s now a 200-seat restaurant in Minneapolis and a 300-seat restaurant in Chicago. Smack Shack got its start with its New England-style lobster roll. The classic roll is made with chilled lobster, cucumber, tarragon and lemon aioli, served between milk bread (Texas toast). The menu also has a Connecticut-style roll, which is served with warm butter on a simple hot dog bun.

This L.A. eatery is Japanese-inspired with California small plates. The restaurant smells like smoky wood, or hinoki, which is the Japanese cedar that owner David Myers seems to have a strong connection with. The lobster roll here might win the award for the most inventive. Myers puts a modern twist on the classic by marinating the lobster meat with citrusy zest, green curry and Thai basil. It’s served on a black roll that’s made with Japanese charcoal. It’s good to get out of your lobster comfort zone sometimes, so when you’re in L.A. you should go check it out.

Known for its counter-serve seafood, lobster rolls and beautiful water views, Abbott’s has been around since 1947 in Mystic, Connecticut. You’ll find clams and oysters on the half shell, mussels, crabs, all kinds of seafood rolls and everything in between. There’s the Maine-style roll with lobster salad and topped with a dash of mayo and celery and served on a hot dog bun and then there’s the famous Abbott’s classic which is hot, buttered and served on a round roll. Each roll is made with 1/4 pound of lobster meat. You can also buy a hot lobster roll kit and DIY at home.

This North End seafood joint is known for its innovative takes on New England classics. There are usually lines that form for the raw bar, but the warm buttered lobster rolls are worth the wait. The pros at Neptune Oyster prepare this beast of a lobster roll with an overflow of lobster meat (lobster tail, claw and knuckle meat) on a colossal brioche bun that’s been grilled and becomes saturated with extra butter. The hot lobster is then doused with clarified butter before it gets to your table. Really low calorie, right? Fans of Neptune Oyster agree it’s worth every bite.

You might not think of lobster rolls when you’re traveling to the Windy City, but this Michelin-starred Chicago eatery is serving up New American dishes inspired by seafood along the coast of Maine. Order the lobster roll from the lunch menu — succulent chunks of lobster are tossed with smoky paprika, house-made chive aioli, a squeeze of lemon and warm butter and are tucked into a buttered Deer Isle bun that’s shipped in all the way from Maine. The buttery and crispy lobster roll, which is one of more reasonably priced on this list, comes with a side of salt and vinegar chips.

Located in Half Moon Bay — a city in San Mateo County, California, that rests on the scenic Pacific coast — is Sam’s Chowder House with a toasty fire-pit setting. As if the views of the Pacific weren’t enough, chef Lewis Rossman, who happens to be from the East Coast, has his lobster shipped in directly from the Atlantic. Rossman makes his lobster rolls “naked-style,” without mayo. He tosses the meat in butter with fresh herbs and diced celery and serves it on a grilled brioche hot dog bun. The best part about this sought-after roll is the spillover of lobster meat.