I Tried A Soup Cleanse And Here’s What Happened 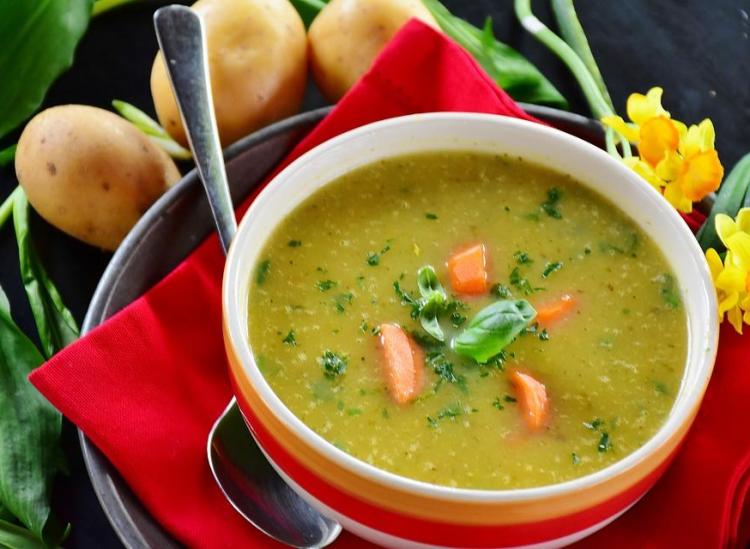 I need to begin with a disclaimer: I don’t believe in “cleansing.” I am of the camp that if you eat well 80 percent of the time, hydrate and stay active, your body’s natural detoxification system accomplishes all the cleansing you need. Forget juicing, eliminating food groups, severely restricting calorie consumption and fasting — just function like a relatively healthy human being and you’ll be good to go.

Now, I’ll contradict myself and tell you about my recent decision to dive into the latest cleanse trend called “souping.” A yogi (and model) friend of mine told me about how her Splendid Spoon subscription resets her body after she indulges throughout the remaining three weeks of the month, and I wanted to learn more. This girl makes her way through a fair amount of sushi, pizza, barbecue and late-night snacks (at least according to her Instagram stories) and is basically in perfect shape. It’s both annoying and baffling. And I had to confirm whether or not her success could really be chocked up to a soup cleanse.

I also self-consciously deal with a fair amount of bloating and inflammation and I’m always looking for a healthier (not necessarily cleansing) way to upgrade my diet and reduce these uncomfortable symptoms. I had just finished giving up added sugar for a month to see how that change could help me, so I figured why not keep the diet experiments going?

I caved and purchased Splendid Spoon’s single-day soup cleanse (four drinkable soup bottles and one heartier soup for dinner) and set of five plant-based, vegan, gluten-free soups for lunch per my friend’s recommendation. I figured I would “cleanse” on Sunday since that’s typically a more restful day for me and I knew calorie restriction would be involved, and then have the soups for lunch at work throughout the week. Here’s how I fared in this six-day reset experiment.

So the Sunday I chose to “cleanse” didn’t end up being as restful as I planned. Attending a wake two hours away from my New York City apartment in the middle of the day meant that if I was going to consume any cleanse soups between the hours of noon and 6 p.m., it would have to be straight from the drinkable bottles… and cold.

Let me tell you, these soups taste perfectly fine when poured into a mug or bowl and heated, but holy crap are they gross when chilled. They aren’t quite pureed, so the little vegetable chunks were just noticeable enough to trigger my gag reflex when trying to down the soups straight from the bottles.

My breakfast soup, parsnip apple, definitely needed to be heated and consumed before leaving my apartment. My lunch soup, butternut turmeric, was the smoothest of all of them so I was able to get that one down on my train ride. But my snack soup, pumpkin pear hempseed, was so chunky that I just left it in my purse and told myself I’d have it as soon as I could get home and heat it up.

So by 6 p.m., I had only consumed 250 calories of the 700-calorie program. No bueno. I stormed into my apartment, ravenously hungry, swearing I was just going to cheat already and scarf down leftover Indian food from the night before. But I somehow managed to keep it together as I heated up the pumpkin pear hempseed soup and drank it down. As my blood sugar leveled out, the red left my eyes and I felt more capable of making it through the rest of the day.

I really liked the red lentil daal for dinner — it felt like a real meal, weighing in at 240 calories — and even the vegan bone broth as my final soup (and dessert I guess?) wasn’t half bad. I went to bed early, proud that I actually stuck to the “cleanse” plan and wasn’t even starving since I saved so much of it for the end of the day.

I woke up feeling hydrated and well rested, but I wasn’t bounding with energy. I walked over to my yoga studio for my 6 a.m. Bikram class (it’s my jumpstart to the week every Monday morning), but it ended up being the opposite of enjoyable. Within 15 minutes, I was woozy and lightheaded, and I felt nauseous throughout the entire class. I ended up leaving early (something I never do) because I felt so sick from trying to work out on a truly empty tank. Whoever says you can exercise as normal in the middle of a cleanse is full of crap (or is doing a much lower-intensity workout than Bikram yoga).

So the day didn’t start off well, but it did improve. After downing some cheese and crackers at home as an early breakfast so I wouldn’t pass out, I commuted to work and felt very focused and productive throughout the morning. My lunch soup was an Ikarian stew, which tasted amazing. It was like a spicy minestrone, but it had more broth than veggies so it only provided 140 calories to my day. Oddly enough, it didn’t leave me starving till dinner.

Now that I was back to eating two of my normal meals alongside one soup meal, I felt much better. My morning HIIT workout went amazingly well and I felt good coming to the office with my steel-cut congee bowl for lunch. Sadly, I didn’t enjoy this one (and ended up throwing half of it away, sigh). It was surprisingly heavy, and the combination of steel-cut oats, mushrooms and cashews gave it an oddly slimy texture and a very earthy flavor. The bowl was 380 calories (literally double the one from the day prior), so I’d estimate I ate 150 calories’ worth.

I had to mix up the plan a bit due to a colleague’s birthday lunch (definitely not complaining). So instead of souping for lunch, I bumped it up to breakfast following my 4-mile sunrise run. It might sound strange to eat (and enjoy) a beans and greens soup for breakfast, but it was fantastic. It was the perfect heartiness after a tough workout in the summer heat, and the spices reminded me of a Mexican-style brunch. It was only 220 calories but I was perfectly satisfied until we stuffed ourselves full of tapas at lunchtime.

My energy was lacking this morning — more likely to do with the hot, humid weather and glasses of wine I downed the night before than my souping experiment. At least I chose the most comforting soup option for my moodiest day: cumin sweet potato. Yum. This soup was perfectly filling at 360 calories, seemingly indulgent thanks to the effect of pureed sweet potato, and loaded with my favorite spices. It seriously perked up my day.

I made it to the final day! My 6 a.m. Bikram class (the one I round out every week with) went exponentially better than the one on Monday, and my last soup, the tomato and turnip pistou, was another wonderfully nostalgic take on minestrone. It was full of beans and potatoes, which gave it more substance (this one racks up 440 calories). What a great way to end the week.

Was it worth it?

Overall, the cleanse day sucked. But a lot of that was due to the other factors of my life and not the cleanse itself. If you can make sure you keep it a low-energy day and stick near a stovetop, you’ll be just fine.

I genuinely loved the soups for lunch throughout the week. They immediately frontloaded my diet with a ton of extra vegetables, and they kept me much more hydrated than I typically am (I’m the worst about drinking enough water). I also didn’t have to worry about meal prep, which was a nice change of pace.

I have no idea if and how my weight fluctuated because I honestly never weigh myself. I don’t even own a scale anymore — I just focus on how I look in the mirror and how I feel in my clothes. But by the middle of the week, my boyfriend was commenting that I looked skinny (score) and I felt confident putting on workout clothes that showed of my flat (and no longer bloated!) stomach. My digestive health was on point this week, and I think these 10 uber-healthy and hydrating meals had a lot to do with it.

I also appreciate the truly nutritional approach to dieting that souping offers. You’re getting whole foods, mostly vegetables and healthy liquids the entire time. (You don’t lose all the good fiber and plant matter, and guzzle all the sugar like you do with juicing.) The calories are on the lower end, but certainly not inducing a level of starvation in the body. It truly makes you feel good.

There are really just two clear downsides to me. First, food in soup form does eventually get boring despite amazing flavor. Sorry, I like to chew my food. I wouldn’t want to do this as a weekly subscription (that’s how the website is set up — you have to opt out of future weeks as they become available in the schedule). And second, it’s expensive. It costs $95 a week to do the cleanse day and the lunch soups package, which is a fair amount more than my weekly grocery bill that also covers most breakfasts and dinners.

So the short answer is yes. I completed a cleanse and actually had positive things to say about it. Can I say it’s effective enough to cancel out my friend’s not-so-nutritious habits during the weeks she isn’t souping? Probably not, but it certainly made me feel good. And that’s really all that matters.