These Trailblazing Chefs Are Cooking With Cannabis 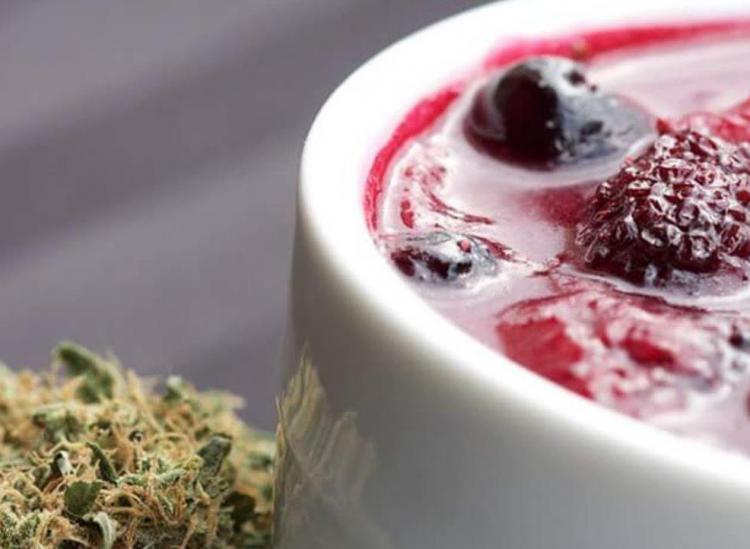 Imagine if eating a slice of pizza or a mozzarella stick was equivalent to a solid dose of marijuana. This fantasy might not be too far off now that 26 states and the District of Columbia have laws legalizing marijuana in some form. Cooking with cannabis isn’t just making a batch of homemade brownies anymore. Pioneering chefs are elevating cannabis cuisine, especially in cities like Seattle and Denver where recreational marijuana use is allowed. Today’s cannabis devotees want to have fine-dining experiences where the chef preparing their meal is an expert at the precise science behind cooking with the herb. If you’re not convinced, there’s an entire series on Viceland called Bong Appétit — think episode names like “Ganja Grandma” and “Kimchi + Kush” — where notable chefs are preparing dinner parties featuring upscale cannabis delicacies. Below, seven trailblazing chefs cooking with cannabis on a gourmet level.

Chris Sayegh, The Herbal Chef, has found his passion and carved out a niche for himself in the cannabis cooking community. His company offers food services that cater to the recreational and medical needs of marijuana users. Most impressive is Sayegh’s dinner party service where he hosts private dinners. Guests pay upwards of $500 for a 12-15-course dinner where each course is infused with cannabis. Paying close attention to ingredients and the sustainable sources that they come from is right at the core of The Herbal Chef. If you’re looking to join in on one of Sayegh’s pop-up shops, make your way over to Los Angeles.

Melissa started her culinary education at Johnson & Wales and went on to attend the world-famous culinary school, Le Cordon Bleu. After moving to Colorado, Parks discovered all of the benefits that marijuana offers to individuals suffering from serious illnesses. From there she learned how the culinary arts and chemistry could be partners in this space. Parks is driven by helping others and connecting with food. All of her cannabis cooking is meant to mask the actually intense flavor of marijuana, putting all of the focus on the beneficial results instead of the herb itself. Parks’ favorite dish, according to an interview with MG Retailer, is a medicated chicken matzah ball soup, where she infuses a matzah ball with roasted garlic, thyme and cannabis and combines it with her traditional family soup recipe.

The Fraulein Chef, AKA Coreen Carrol, is a San Francisco-based chef who was born and raised in Germany. Carrol attended the San Francisco Cooking School and after holding a few culinary positions she began working at an underground pop-up restaurant called Sub Culture Dining Series by chef Russell Jackson. Around the same time she became a teaching assistant at San Francisco Cheese School. This sounds like our kind of school! Carrol decided to combine her cannabis experience with her cheese school education. She now has a company called Madame Munchie (medicated French macaroons) that won a High Times award for best edible. Carrol and her partner Ryan founded The Cannaisseur Series, which is a pop-up restaurant that focuses on food and cannabis pairings and gives people a safe and relaxing environment to experience this emerging culinary world.

This champion marijuana chef is a graduate of Le Cordon Bleu and co-owner of Elevation VIP Co-op — a Los Angeles-based medicinal marijuana dispensary that caters classy and intimate dinner parties. The company focuses on inventive cuisine, using locally sourced organic ingredients that boost the quality of life for patients in the Los Angeles area. Drummer has made a name for herself among cannabis-supporting celebrities and takes pride in marrying ingredients with specific cannabis strains that will compliment the food in order to cater to each individual. You might’ve heard of Drummer from Chelsea Handler’s Netflix show Chelsea Does, where she prepared a whole dinner experience for Chelsea and her friends.

A post shared by The Ganja Kitchen Revolution (@chefjessicacatalano) on Jan 26, 2015 at 1:05pm PST

As a cannabis edibles expert, food writer and cannabis chef Jessica Catalano has carved a place for herself as a point person in the industry. Catalano is the founder of TGKR (The Ganja Kitchen Revolution) and the author of The Ganja Kitchen Revolution: The Bible of Cannabis Cuisine. Known as the pioneer of strain-specific cannabis cuisine, Catalano believes in teaching people how each strain will affect their bodies medically and how certain strains can help to treat certain medical problems. The cannabis chef also teaches a cooking with cannabis class and co-hosted the very first cannabis pairing dinner during the 2015 Aspen Xgames. This woman is definitely a force to be reckoned with.

After winning Top Chef season 5, Boulder-based Hosea Rosenberg now owns Blackbelly, a market, restaurant, butcher shop and catering company that’s based on the farm-to-table philosophy and actually has its very own farm. He has made a name for himself after hosting a four-course cannabis-themed dinner at his restaurant with marijuana pairings for each course. Instead of actually infusing his cuisine and cooking with the cannabis, he meets with weed growers and producers and decides what pairings work best.

This California-based chef has taken on the role of Ganjier, basically a sommelier of marijuana. In addition to offering Cannabis dinners, he adds in a little bit of marijuana education where guests can learn about the characteristics of each strain they’re smoking and about the different flavor notes. Jagger has an upcoming TV show called Altered Plates, which is part cooking show and part learning opportunity where he’ll teach people about the health and lifestyle applications of sun-grown California cannabis. Jagger focuses on topics including terpenes (fragrant oils that give cannabis its aromatic diversity) while teaching whole-plant recipes that treat cannabis just like any other culinary endeavor.