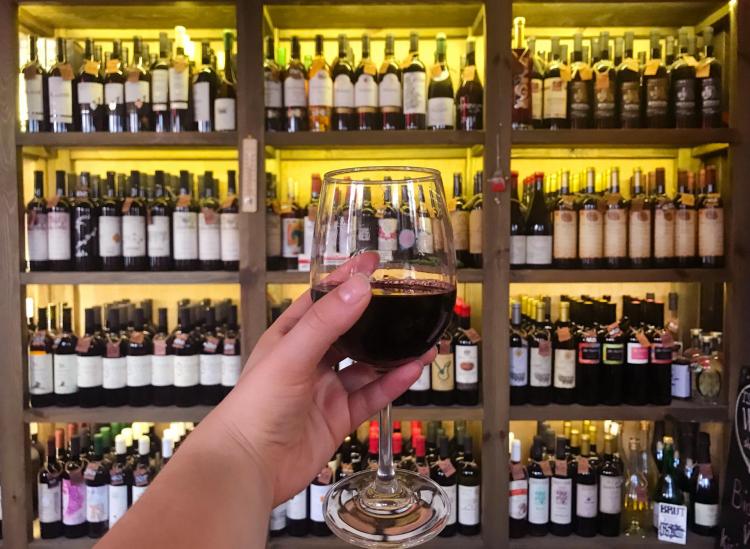 A tiny country between Turkey and Russia claims the title of “the oldest wine culture in the world.” It’s Georgia, the Caucasus nation that shares its name with the state in the south of the United States. Now, while rural Georgia in the U.S. does make some pretty good vintages, we’re here to spread the word about the wine you should be drinking from the country of Georgia.

Georgian winemakers have perfected the process over many centuries (remember: oldest wine culture) and that artistry registers in every sip. But beyond the imported bottles you can get in the U.S., Georgia is the next wine country destination to put on your tasting list — for the wines, yes, but also the views and the enjoyably intense drinking culture.

Your wine choices are endless. 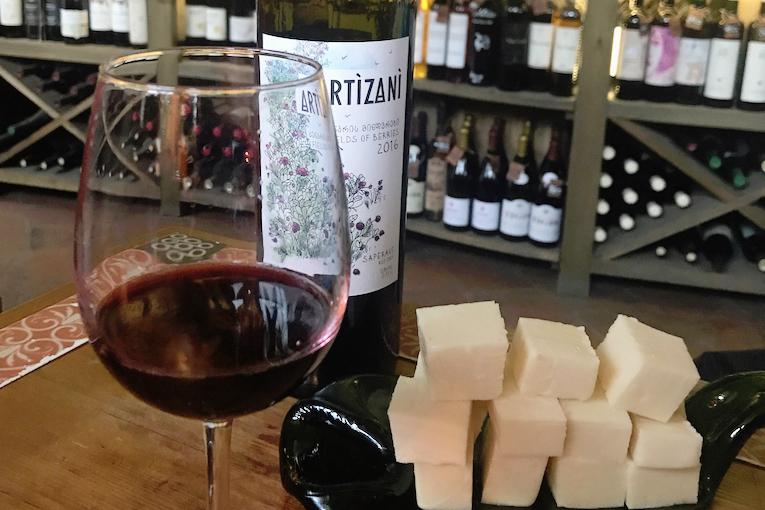 So what is Georgian wine and what makes it so excellent? It’s all in the grapes.

The main wine region in Georgia is Kakheti, an area in the lush foothills of the towering Caucasus mountains. It’s not that different in temperature and climate from the south of France, which is recognized as one of the wine capitals of the world by sommeliers and winos alike. But that means that equally excellent grapes grow in Georgia.

There are two main types: Rkatsiteli is a white grape, grown mainly on the eastern side of Georgia, while Saperavi is a red grape, grown in the western part of the country. But there are actually nearly 500 grape varieties in Georgia.

Georgia and its winemakers have gone through hundreds of years of change, starting nearly 8,000 years ago when the wine traditions began (that’s prehistoric times in Egypt and right around when the wheel was invented). During last century’s communist rule, the Soviets almost exclusively cultivated hearty high-yield grapes, which is why you’ll still find a ton of Saperavi and Rkatsiteli, but individual family farms saved the more unique varieties. And that’s where the fun begins with Georgian wine: the small batch producers.

We sampled an aromatic Saperavi in Tbilisi, the Georgian capital city. It was berry-flavored with hints of sparkling lavender. In Kutaisi, a smaller city to the west, we tried refreshing whites (blends of mineral Rkatsiteli and the fruitier Mtsvane grapes).

There’s also a signature wine-making process that’s entirely unique to Georgia. To make wine, most wineries use only grapes. They press out the juices and that juice gets fermented into wine using wooden casks. But in Georgia, they put everything into large beeswax-lined clay jugs — grapes, juice, skins, seeds and even stalks. The jugs are then buried underground and left to ferment. This process is called “qvevri” and gives the wines a mix of sweet, savory and earthy notes from the clay fermentation.

So when you look at a wine list, know that qvevri wines are made in the ancient Georgian tradition. While other varieties might be made with Georgian grapes, qvevri wines are the ones that are on the UNESCO Intangible Cultural Heritage of Humanity list. Qvevri white wines come out with an orange tint, while qvevri reds can be so dark they’re called “shavi gvino” — black wine.

There’s no such thing as one last glass. 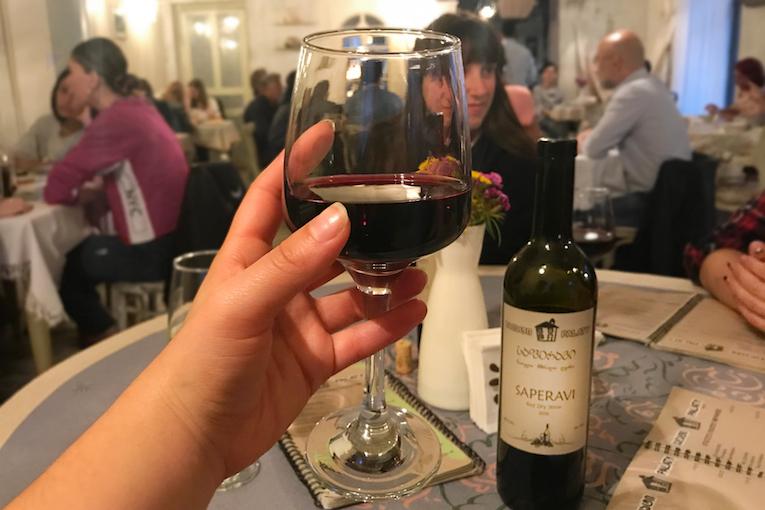 Along with the ancient winemaking tradition in Georgia, there’s also a longstanding drinking tradition. Georgians can drink until you’re on the ground without even batting an eye. But you’ll be happy on the ground because everything that might put you there is delightful.

And it’s not just wine — there are also local varieties of brandy and chacha, a moonshine made from grape skins that is the strongest glass of alcohol you’ll drink throughout your entire trip. It’s not out of the question for a jug of chacha to appear on your table after you’ve consumed half an order of the house wine. It is out of the question, however, to refuse a hospitality gift like this. When in Georgia, drink like the Georgians drink.

However, you can rest easy. Georgian wine (and chacha) comes hangover-free — or so the locals like to proclaim. Is it true? Well, you’ll have to test it for yourself.

You can create your own wine tour adventure. 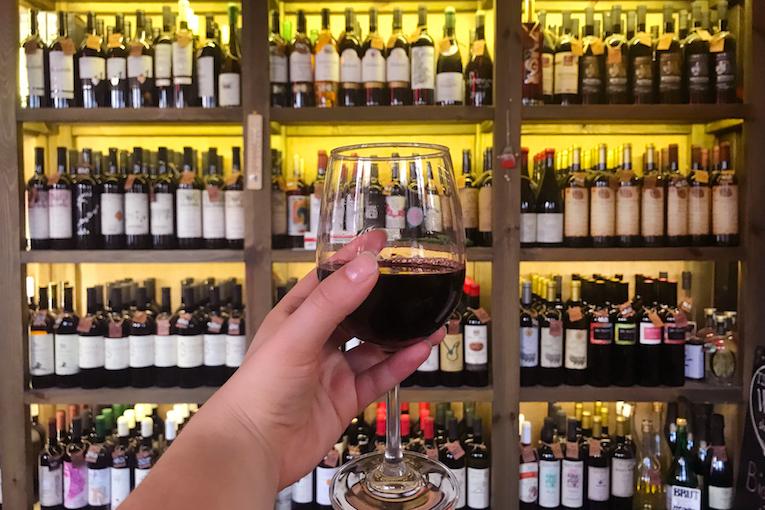 There are two ways of thinking about a wine tour through Georgia. You can visit Kakheti and see the gorgeous vineyards of the region. It’s the classic wine country experience, especially in the town of Sighnaghi, recently renovated and spruced up to feel almost like a villa in the Italian wine paradise of Tuscany. For a Kakheti must-do, book a table at Pheasant’s Tears Winery. It’s American-owned (no language barriers here, which makes for an easy entry into the Georgian culinary and viticulture scene) and the food is rated among the top fine dining spots in the country.

Alternatively, you can treat yourself to a whirlwind trip around the country, sampling regional specialties as you go. Starting in Tbilisi, hit the wine bars in the charming Old Town before heading to Khaketi in the east for white wines and mountainous Svaneti in the northwest for red wines.

If you’re looking for the local flare (which we swear by), fill up on house wine. You don’t need to do your own on-the-fly research on the wine list or try to remember your favorite grapes. Simply trust the restauranteur to serve a good blend. And Georgians take hospitality seriously — just glance at any dinner spread for proof — so you’re almost definitely in good hands.

You could also literally fill up water jugs with homemade wine at stalls alongside Georgian highways. On our trip through Georgia, we were served brandy out of recycled Coke bottles and giant carafes of irreplicable house wine at tiny basement restaurants. And we’d rank those chaotic pours among some of the best we tasted, right alongside the plethora of vintages we sampled at the tiny and welcoming Tsangala’s Wine Shop & Bar in Tbilisi.

Can’t book a ticket to Tbilisi right now? You can still sample some Georgian wines. We’d suggest finding a Rkatsiteli (for a dry white), Tvishi (for a sweet white) or Saperavi (for a dry red) or Mukuzani (for a sweet red) at your local wine shop.