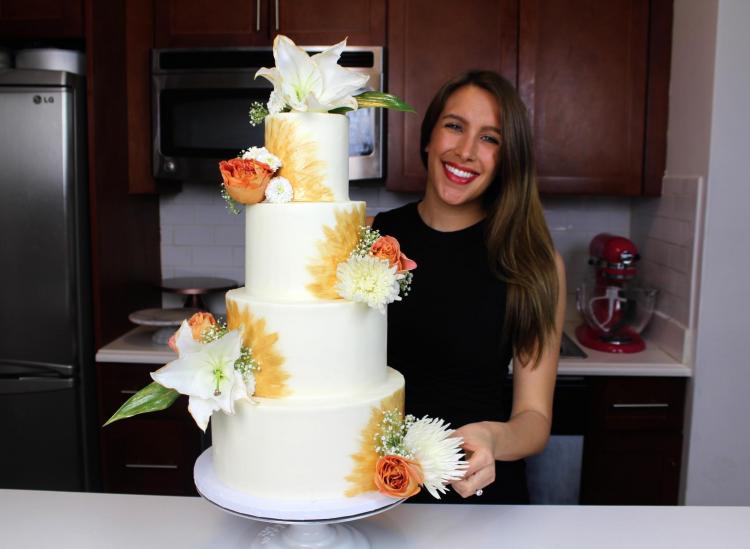 If you don’t follow Chelsey White, or @chelsweets, on Instagram, then you’re going to want to start now. Chelsweets isn’t just her handle on the social media platform — it’s also the name of her cake company that started out as a simple passion for baking. Now, years later, White is killing it in the kitchen and racking up followers on Insta with some of the sweetest videos we’ve ever seen.

After faingirling over her amazing baking and decorating skills alongside her almost 800,000 followers on Instagram, we dove a little deeper in a phone interview with White to discuss exactly how she turned her Chelsweets side hustle into the full-time gig that it is today.

From Accounting To Cakes

After growing up in the suburbs of Seattle and graduating from the University of Washington, White moved across the country to New York City in search of her dream job — becoming a CPA.

“I was a total nerd and always wanted to be a CPA,” she told Swirled. “My dad’s an accountant so I went to school for that and I liked it. I got my CPA and worked at the ‘Big Four’ for a few years, eventually switching over to a more corporate finance role. That’s definitely what I thought I would do in the long run.”

After about one year of working full-time in the finance industry, White started baking cakes for fun. Often times it was for a coworker’s or friend’s birthday, but before she knew it, others were asking her to bake them one, too.

“I didn’t grow up baking,” White said. “I really just needed a creative outlet. Eventually people tried to start ordering cakes from me. It wasn’t so much that I was pushing to make money. It kind of just happened organically, and I wasn’t opposed to it. When people started asking how they could order a cake, I started working to put processes in place to take orders and build it into my work schedule and everything else like that.”

Baking Her Way To Burn Out

After a few years working full-time and baking cakes on the side, White was feeling a little burnt out. Long days and weekends in the office made baking cakes difficult to balance.

“It was so hard,” White said. “I didn’t really have a good balance in my life and I wasn’t seeing my friends as much as I’d have liked. I literally could only make so many cakes per week and they take a lot of time. I was even trying to figure out delivery and pickup with my jobs. I’d have meetings get moved and it was just really complicated with work, so that was hard.”

Though it was tough to find the time to do it all, White managed somehow, clearly showing how strong her passion is for the sweet business.

“It was a kind of a tradeoff, and I think you just prioritize things at certain points in your life,” she said. “I was really having fun with it, so I kind of just dove into it head-first.”

A year after making cakes, White started charging a little more for her creations. Her skills were improving and her baking got better, so she was able to charge a little more, eventually making a decent profit about a year into selling her sweets.

“The goal was never to make money, and I think that’s something that is so important for a lot of side hustles,” she said. “You have to really care about what you’re doing and be passionate about it because it’s so hard to do on top of your regular job. If you don’t enjoy it and are just trying to make money, I think you’re not going to be successful because it takes so much work and dedication. If you don’t enjoy it, I just don’t think it’s worth it.”

With White’s passion driving her side hustle, she began sharing her cakes with the world on Instagram. Little did she know, though, that her photos and videos would propel her following from few to many.

White didn’t start doing videos on Instagram until a few years after she started selling her cakes, but her timing was pretty perfect with Instagram’s algorithm changes.

“I started making videos right about when Instagram may have been prioritizing them in the algorithm. I was making so many cakes and I’d see so many other people making videos and I was like, ‘I could do that,'” she said. “I never planned to do what I’m doing now — fate was on my side. It definitely wasn’t the intention from the start.”

Over time, her following grew. Her account now has close to 800,000 followers.

“I think as the quality of my videos got better and, as I became more adventurous in what I was making, it just really took off,” White said. “I also started working with Food Network and they have a huge audience. They tag you when you make things for them, so that partnership was really great, too.”

With White’s side hustle in full swing and her Instagram following on the rise, she finally decided to make the switch to baking cakes full-time. It took her almost four years before she made the move because it wasn’t just about the money.

“There’s also health insurance and benefits and all that jazz,” she said. “And knowing how much money you’re going to make each month is really nice, too — you know, having a reliable paycheck. It was never that I wanted to just make my corporate salary and quit. I really had to get to a point where I was super comfortable with what I was making so that it was worth it. It was a decision that I just couldn’t keep doing both.”

As White works full-time running Chelsweets, she’s also conscious that time will tell if it’s what she does for the rest of her career or not. White’s very aware that being your own boss is great, and turning your passion into a profit can be so rewarding, but it can also be demanding. Instead of trying to figure it all out right now, she’s focusing her energy on things that she didn’t have time for in the past, like her YouTube channel and her blog.

“I don’t know where this is going to take me,” White said. “I don’t know what my long-term goals are yet, and I like to say that I have a blurry image of what I see for the future but I’m not 100 percent sure what it looks like. I would definitely love to keep doing what I’m doing now, and hope that it does grow into more opportunities.”

Advice For Doing More Than Just Your Day Job

With a handful of years under her belt, it seems like White knows a thing or two about starting a successful side hustle. If you’re looking to do the same, consider the long-term goals instead of the short-term success.

“I think people think they need to be super successful immediately or they’re not doing anything,” White said. “But things take time to amp up and you may have a more sustainable business if you take the time, really think it through and approach it at a rate that you can keep up for the long run.”

Don’t let a lack of clients or conversions get you down. Managing side hustles is hard work, and sometimes it’s even about timing. White said to capitalize on opportunities as they present themselves and take risks.

“A lot of what got me to where I am is that I was willing to do live-stream videos of cake decorating, which, when it first came out, no one really did — no one had expertise in that area,” she said. “By being willing to do that, I was able to share content on a lot of different platforms that I wouldn’t have been able to otherwise. And being open to taking that risk that something could go wrong in front of hundreds of thousands of people watching helped me grow a lot.”

Whatever you do, remember your passion for your side hustle and business. Because if you love what you’re doing, it’ll be easy to improve your craft, do your best and have fun along the way. Time will always tell, but you’ll never know if you don’t start.

Sign up for Side Hustle by Swirled, our newsletter featuring money-making tips and inspirational stories to help you turn your free time into money.