Relax Like Royalty In One Of These Castle Hotels 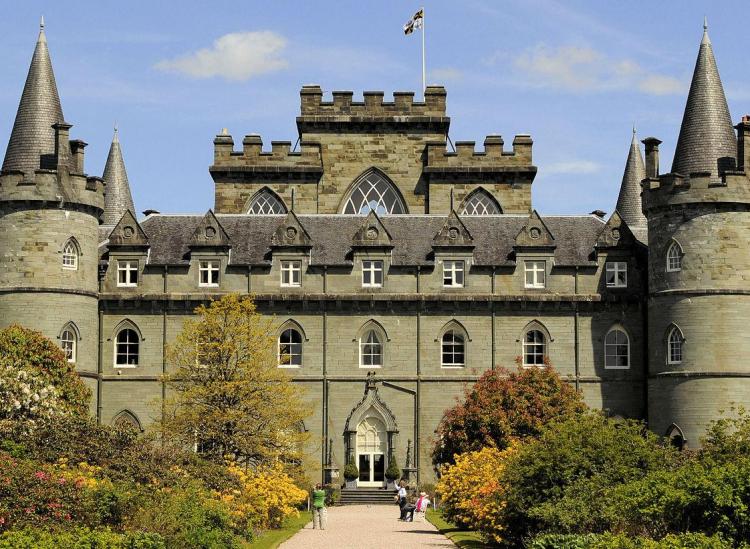 Once upon a time, castles were built as fortified homes for royalty and nobility — but in the 21st century, they carry more history than royal lineage. Today, there are still hundreds of castles across Europe and the Middle East remaining that, unlike the century they were built in, are open to non-royals, AKA the rest of us. If for some reason you don’t quite have the funds to buy a castle just yet, these historic homes are available for the fanciest vacation of your life. And in case you were wondering, a castle is a fortified structure that serves as a home as well as a fortress during battle, while a palace is not fortified. The list below includes both.

This 15th-century palazzo in Venice, Italy, is located on the Grand Canal across from the stately Basilica di Santa Maria della Salute. A full-scale renovation in 2013 returned the palace to its former beauty, complete with the restoration of hundreds of antique paintings and artifacts. A room for two, featuring sky-high ceilings and Venetian fabrics (plus modern amenities like WiFi and air conditioning) starts at 430 euros (approximately $457 USD) a night.

In its centuries-long history, Ashford Castle has hosted guests like King George V and Queen Mary, John Lennon and George Harrison, Brad Pitt, and Prince Ranier III and Princess Grace of Monaco. Built during the Middle Ages, this Irish castle currently operates as a luxury hotel with 82 rooms and suites and 350 acres of ancient woodland. Rooms start around $600 a night.

Located in Jaipur, the “Pink City of India,” the Narain Niwas Palace was built in 1928 by a general and includes both Indian and Anglo elements of design, the integration of which was popular at this time. The palace was the country home of Rajasthan royalty, featuring 37 luxurious rooms and suites. Book a room for as little as $100 a night.

A post shared by Inverlochy Castle Hotel (@inverlochycastlehotel) on Feb 17, 2017 at 3:21am PST

Built in the 19th century by a British baron, Inverlochy Castle Hotel is named after the first castle to bear this name, two miles away. In 1873, Queen Victoria stayed at Inverlochy and said, “I never saw a lovelier or more romantic spot.” The castle has operated as a hotel since 1969, with rooms starting around $500 a night.

Schönburg Castle, located in the UNESCO World Heritage site of Germany’s Upper Middle Rhine Valley, is first referenced in historical texts as far back as the 900s, but the original castle was destroyed in 1689 during the Palatinate Wars. In the late 19th century, the castle was restored by a family from Oberwesel and today, it operates as a hotel with extensive gardens. Book your stay for as little as $130 a night.

Known as the Tudor castle where King Henry VIII spent his honeymoon with Anne Boleyn, Thornbury dates back to the 16th century and includes a vineyard and a kitchen garden, not to mention an imposing dungeon dining room. Today, Thornbury is a luxury hotel with 27 decadent rooms. If you love your stay (rooms are available for $100 a night), consider making an offer.

Formerly the summer residence of the Habsburg family, Schönbrunn Palace boasts an incredible 1,441 rooms and is considered one of Austria’s most important cultural and architectural monuments. Along with massive gardens, a zoo, and greenhouse, the grounds of Schönbrunn contain a maze and several sculptures. In this palace, there is just one suite you can spend the night in, which includes a salon, two bedrooms, a spacious drawing room and two modern bathrooms. Reserve the suite by contacting the palace directly.

The Ciragan Palace in Istanbul was built in 1863 by Sultan Abdülâziz of the Ottoman empire and was passed down through his family until the palace burned down in 1910. The estate was eventually restored to its original baroque style and is now owned by Kempinski, a hotel group based in Geneva, which is responsible for amenities like a heated outdoor infinity pool and accessibility by yacht, car, or helicopter. A standard room with a balcony goes for $600 a night.

Dalhousie Castle was built in the 13th century by a Scottish noble family whose plans included barrel-vaulted dungeons, an award-winning falconry mews (a birdhouse designed for birds of prey) and and themed bedroom suites. Dalhousie is well-known for its dungeon restaurant, where “traditional Scottish castle cuisine” is still served. Contact the castle directly for booking information.

Built during Medieval era, Castel Pergine appeared in historic records for the first time around 1177 and highlights a military Gothic style of architecture. Built into a hilltop above the town of Pergine, it was armed for battle in its early dates, but lives on as one of Europe’s more affordable castles, with rooms starting around $90.

Talabgaon Castle was built in 1818 in the Rajput architectural style and has remained in the same noble family for the last 200 years.  Located an hour and a half from Jaipur, this elegant “living castle” is designed to put guests in the life of a Rajput noble, with 26 rooms and suites available. Talabgaon is surrounded by the Indian countryside, and Ranthambore Tiger Park is 50 miles away. Book a deluxe room for $102 per night.

This storybook castle dates back to the 11th century, when it was used as a mountain fortress. It’s built on top of an extinct volcanic cone. Kapfenstein has its own vineyards, 15 guest rooms and a restaurant run by the owners that features cuisine from Styria, in southeast Austria. Each suite has its own unique architecture and is decorated with antique furniture. A single night’s stay, which includes breakfast in the castle, starts at $80.

Built in the 14th century, Sommersdorf is a classic Bavarian castle complete with tall towers, a moat, drawbridge and spiral staircases. Since 1550, the castle has been in the possession of the von Crailsheim noble family, whose descendants continue to live there and run Sommersdorf as a hotel. Careful renovations have kept the castle in good shape, but the real draw for visitors is the old-timey and romantic feel. Rooms start at $110 and are even available for long-term rentals (more than 21 days).