Here’s Everything You Need To Know About The Body Chakras 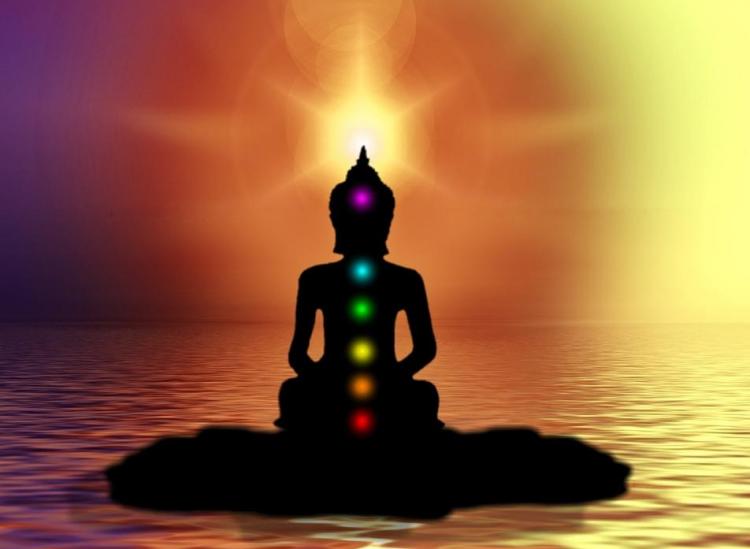 During the meditation component of a yoga class, sometimes the instructor guides you to close your eyes and visualize a vibrant white ball of energy at the base of your spine. He or she then tells you to watch it move all the way up to the crown of your head as you inhale and then watch it glide all the way back down to the base of your spine as you exhale. You repeat this pattern several times alongside your classmates, attempting to literally observe and focus on the shift of energy within your body.

Eventually, many yogis reach a point in their daily practice when they crave a stronger understanding of how to manifest, control and align this kind of natural energy that exists within them. And to do that, they have to explore the seven energy wheels in the body that are located along the spine and are commonly referred to as “chakras.” Luckily, the meditative exercise above has already primed most of us for such a lesson because that white energy connects with each chakra along its path through the body.

Let’s work from the ground up, shall we?

Your first chakra is the root chakra, which is called “muladhara” in Sanskrit. Physically, it includes your first three vertebrae, bladder and colon. Emotionally, it provides you with a sense of stability and security, feeling as though all of your basic needs are met. It is the origin of your energy. It’s typically red in visual representations and it’s connected to the element of earth.

Your second chakra is the sacral chakra, which is called “svadhisthana” in Sanskrit. It’s physically located just above your pubic bone and below your navel, and it includes all sexual organs. Emotionally, it provides your sense of both creativity and sexuality, and it provides your reproductive energy. It’s typically orange in visual representations, and it’s connected to the element of water.

Your third chakra is the solar plexus chakra, which is called “manipura” in Sanskrit. Physically, it exists in the space between your navel and your breastbone. Emotionally, it is the place from which you derive your sense of personal power, and it controls how you distribute energy through your body. It’s typically yellow in visual representations, and it’s connected to the element of fire.

Your fourth chakra is the heart chakra, which is called “anahata” in Sanskrit. It’s physically located at the heart’s center and is the midpoint of the seven chakras. While the first three root and ground you, the top three lift you up spiritually. And it is the heart chakra’s role to strike a balance between these two forces. Emotionally, this is the space from which we give love and connect. It’s typically green in visual representations, and it’s connected to the element of air.

Your fifth chakra is the throat chakra, which is called “vishuddha” in Sanskrit. Physically, it includes your neck, thyroid, parathyroid glands, jaw, mouth and tongue. Emotionally, it is the chakra that allows us to verbally express our highest truth when it is in balance. It’s typically blue in visual representations, and it’s connected to the element of ether.

Your sixth chakra is the third eye chakra, which is called “ajna” in Sanskrit. It’s physically located between your eyebrows, and emotionally, it represents your center of intuition. When you’re balanced, you’re able to hone your ability to really trust in this gut instinct that can guide you successfully through life. You can envision your own soul. It’s typically violet in visual representations, and it’s connected to the element of light.

Your seventh chakra is the crown chakra, which is called “sahaswara” in Sanskrit. Physically, it’s located at the very top of your head. Emotionally, it remains the space where you can find both enlightenment and a spiritual connection to yourself and those around you when it’s fully open. It’s typically white in visual representations, and it’s connected to the element of cosmic energy.

Now, what does all of that mean exactly?

Let’s bring it back to the white light meditation exercise. Each of the chakras is strongly connected. They function as a circuit, meaning you can’t just skip over one that’s giving you trouble and move on to the ones that feel balanced. Your inner energy needs to be able to move along the track of your spine seamlessly without course corrections.

As you tune more and more into your body, you’ll come to find your own physical, mental and emotional signals that tell you when one of your chakras is “blocked” or “out of balance” because when that happens, you will be unable to let your energy flow freely.

Sometimes that will manifest physically with cold symptoms blocking your throat chakra, for example. Other times, it will be rooted in an emotional imbalance, like how when you’re struggling with love and personal connection, heart chakra-opening postures like camel pose can make you feel dizzy and nauseous. And other times, it will be a spiritual block, where you lack trust in yourself and therefore can’t fully identify with the third eye chakra.

Deepening your understanding of the body chakras is one of the best ways to bring yourself closer to that coveted mind-body-soul connection you crave. If the holistic approach leaves you feeling skeptical, try looking at it more so through a lens of self-awareness. These can all be true symbols of self-care. The more you practice, the more you come to understand and recognize yourself in each plane of being. And that knowledge is what allows you to successfully channel your own inner energy toward your health, light and life in general.