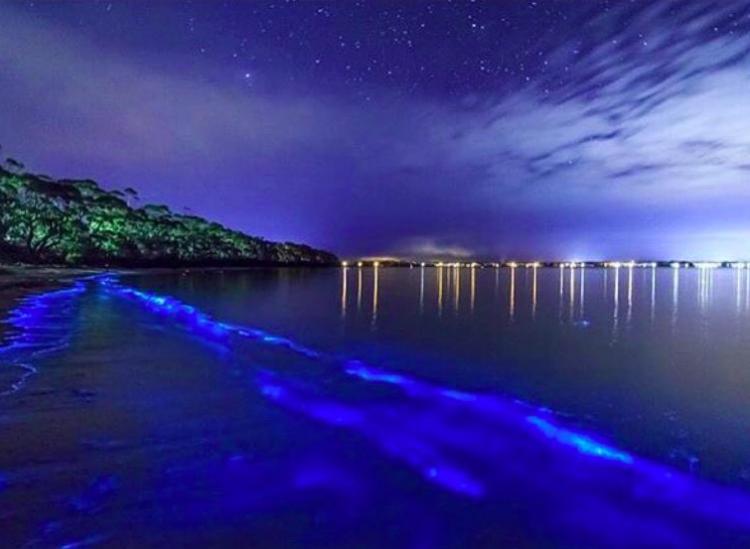 You’ll hear a phrase passed around travelers through Puerto Rico. “Have you been to the Bio Bay?” They mean the bay illuminated by bioluminescent plankton, a sparkly effect best seen by boating across the quiet waters on a dark night.

Puerto Rico has three bioluminescent bays, but the best and brightest is Mosquito Bay on the outer island of Vieques. (The other two are located in Fajardo and Lajas.) And Vieques’ bio bay is one of the brightest in the entire world. Mosquito Bay is lined with mangrove trees, trapping all of the plankton inside with the tides. And you can get right up close to these sparkly waters on the small island on an unforgettable kayak ride.

Why The Bay Glows

Mosquito Bay is full of small organisms, but not the insect pests it appears to be named after. The bay is flooded with dinoflagellates, microscopic plankton that glow when they sense movement. If you go out on the bay, you might hear them called dinos, although their official scientific name is Pyrodimium bahamense. And these dinos light up by converting their own energy into light. In Mosquito Bay, there can be up to 700,000 dinos in one gallon of water. So you can imagine how bright the bay can get.

Scientists aren’t entirely sure why the plankton glow, but the best guess is that’s its a mechanism to keep them from being eaten. If they glow, the dinos look much bigger than they actually are and less like a yummy snack for passing fish. In fact, the dinos can appear 100 times bigger than they are, thanks to their bioluminescent capabilities.

You want to visit Vieques on a dark night, meaning you should aim for a night with little or no moon. The new moon is ideal, but mainly, just skip the full moon. You’ll be able to head out on the bay in a clear-bottomed kayak and spend an hour or two riding the waves of the pitch-black water. Your kayak paddles will toss around the plankton, making them light up.

But you can also splash around in the water with your hands, making everything glow. If you’re wearing dark clothing, we suggest splashing some on top to see yourself sparkle, too.

Sadly, there’s no swimming in the bio bay. It’s not good for the plankton. And you should avoid wearing bug spray and sunscreen because they poison the little dinos.

If you’re very lucky, you’ll be able to see sealife below your clear kayak. The fish swimming in the glittering waters look like glowing shadows. If you’re incredibly lucky, you might even spot a nurse shark swimming next to you.

A kayak adventure through Mosquito Bay costs between $50 and $80, depending on the company, the length of the paddling trip and the time of day you choose. You can go out around 7 p.m. or 9 p.m., but to see the bio bay in all its glory, you’ll have to stay overnight on Vieques.