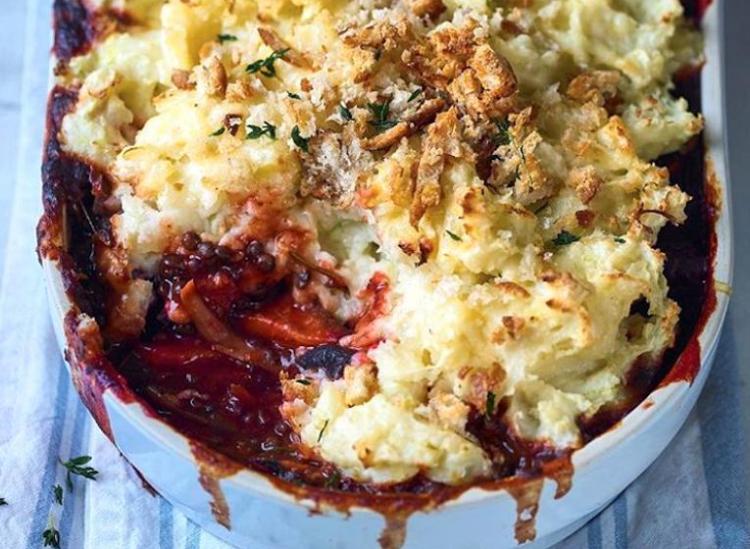 Clueless as to what to cook for St. Patrick’s Day? Lean into those Irish traditions and make some shepherd’s pie. It’s hearty, it’s tasty and it’s one of the most comforting foods ever. Even if you’re not a meat eater, there are plenty vegetarian and vegan recipes out there that are just as satisfying as the traditional dish.

Shepherd’s pie has always been a staple in Irish cooking. It’s usually made with a layer of ground meat or vegetables in a savory gravy and a thick buttery layer of mashed potatoes. So if you’re looking for a filling vegetable dish to soothe the soul, try some of these vegetarian and vegan shepherd’s pie recipes.

Celebrity Chef Jamie Oliver has a foolproof vegan shepherd’s pie recipe that’s all kinds of rich and hearty with fluffy sweet potatoes and crisp and zesty breadcrumbs. Between the lentils and the chickpeas, you’ll be feeding yourself for the week.

If you want something that’s perfect for St. Patrick’s Day but also has a little bit of a twist, this creamy lentil shepherd’s pie is your best bet. It’s spiced with all the cumin and coriander. Yummm.

This hearty recipe calls for a mix of herbs, mushrooms, green lentils and a little cinnamon for a sweet kick. This vegan shepherd’s pie is also packed with vegetables and a tomato-based gravy.

A little grated Parmesan, chopped fresh sage, yogurt and veggie broth make this shepherd’s pie extra creamy and indulgent. Not to mention, between the cauliflower, broccoli, green beans and peas, you’ll be all set with your daily dose of vegetables.

5. Shepherd’s Pie With A Cheesy Potato And Leek Topping

This cheesy recipe calls for a strong cheddar cheese, whole milk, dried breadcrumbs, herbs and a lot of vegetables. You’ll get a ton of color from the beetroot and, with a little bit of Worcestershire sauce and lentils, you’ll forget all about the meat that’s missing.