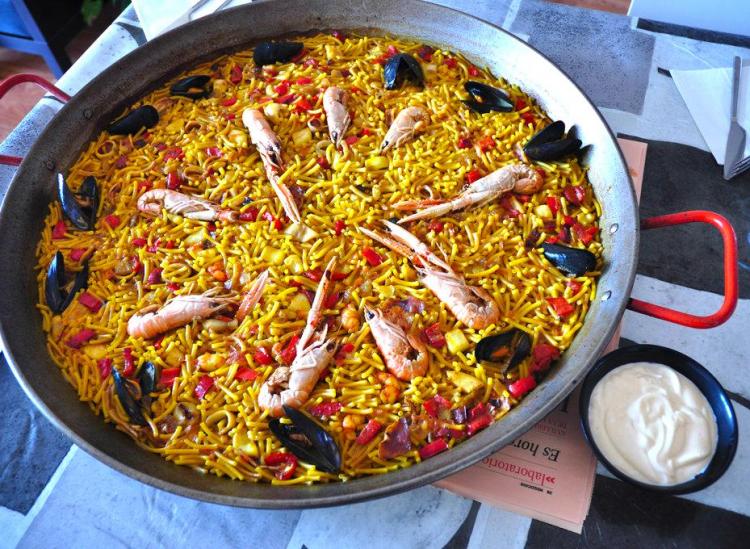 Spaniards are well known for being some of the most laid-back people in the world. They’re blessed with beautiful Mediterranean beaches, siestas, sangria, architecture, an all-star national soccer team and most importantly one of the most diverse cuisines out there. You could go to Spain a dozen times and you still wouldn’t be close to discovering all of the amazing food this vibrant country has to offer. Paella and croquetas are delish, but there’s so much more you have to try. Here are nine underrated dishes for your next vacation.

The name Arroz Caldoso means “brothy rice” and it’s a mixture of bouillon (broth) and rice with all sorts of other ingredients that vary from region to region. It’s basically in between a soupy seafood paella and risotto. In Spain, Caldoso is served as both lunch and dinner.

Pringa originated from pork stew leftovers. It’s made with pork and chickpeas and the meat is cooked for hours and hours until it easily falls apart. Pringa is typically served in between crusty bread and it’s a common dinner food across Spain, specifically the southern coastal region of Andalusia.

Fideuà is where paella and pasta dreams come true. This dish is a one-pot-wonder that’s made with fideos pasta (thin, short angel hair pasta) instead of rice. Fideuà brings together prawns, squid, tomatoes and sweet and spicy pimentón (a Spanish smoked paprika). It’s seasoned with lemon and sometimes a dollop of garlic aioli.

This traditional Mexican meatball soup is comfort food at its finest. Albondigas is made with ground or minced meat that’s rolled into small balls — sometimes with other ingredients like bread crumbs, minced onion, eggs, carrot, rice, cilantro and other seasonings — and cooked by frying, baking, steaming or braising in sauce. The broth has onions, celery, tomatoes, cumin, oregano, zucchini and a few other herbs and spices.

Migas, in Spanish, means bread crumbs. This dish was born on the Spanish plains by shepherds who made the most of their stale bread, wild garlic and olive oil. Here’s how you can make the most of your leftover bread crumbs. While there’s no exact formula, migas often has yellow onions, extra virgin olive oil, garlic, chorizo, Gallega spice, bread crumbs, salt, pepper and eggs.

This Spanish dish is from the Region of Murcia and La Mancha. It’s made with tomatoes, onions, garlic, eggplant (or summer squash), green peppers, red peppers and olive oil. Pisto is basically Spain’s version of ratatouille and it’s accompanied with a fried egg and bread for dipping. Some versions involve chorizo for an extra layer of flavor.

When you need to satisfy your sweet tooth during your trip, look for vendors selling Turrón, also known as the Spanish almond Christmas candy. Turrón is typically made of honey, sugar, egg white, toasted almonds or other nuts and it’s shaped into rectangular blocks.

Cochinillo, or roast suckling pig, is a typical dish of Castilla, and more specifically the city of Segovia. Not to be confused with Genovia, the Princess Diaries fairytale land known for its pears. This Spanish dish is all about the tenderness of the roast pigs and how delicate the meat is. Cochinillo is usually the centerpiece of traditional Spanish meals and it’s roasted with Spanish olive oil, butter, carrots, onion, salt and pepper.

Popular in the south and center region of Spain, gambas al ajillo is made of shrimp, garlic and olive oil. This dish is often served at Spanish tapas bars as an appetizer. The best part of gambas al ajillo is the caramelized garlic and shrimp juices that settle at the bottom of the pan. Take a nice crusty loaf of bread and dip away. You’ll also find chili peppers in Spain, but some versions use pimentón.