This Indian Dessert Is Every Cheesecake Lover’s Dream 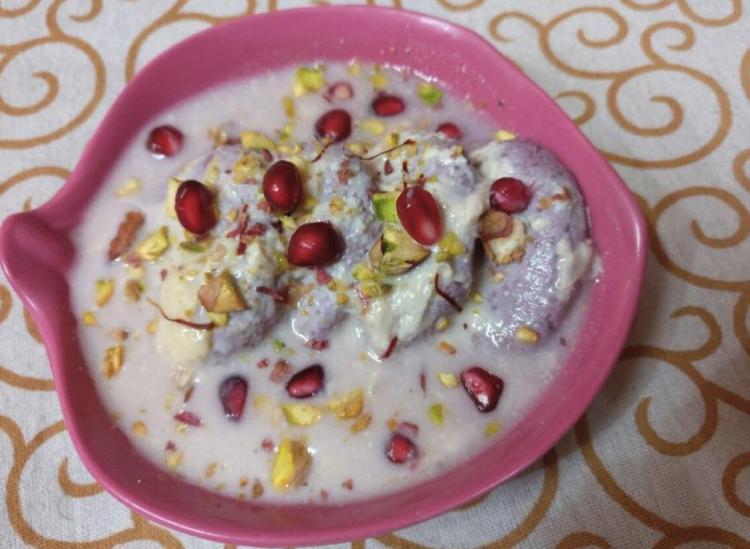 Get ready for all of your cheesy dessert dreams to come true.

Rasmalai is a Southeast Asian dessert that’s like a rich cheesecake without the crust. You’ll find this soft, spongy treat in parts of India, Pakistan and Bangladesh, and it’s often served as a special occasion dessert at Indian weddings. Rasmalai has two main components: thickened milk and rasmalai balls. And the resulting combination is what you’d call “lip-smacking.”

To make the rasmalai balls, boil milk and then curdle it by adding lemon juice or vinegar. After squeezing out all of the water from the curdled milk, you’re left with a dense protein called paneer. Mash or place the paneer in a blender until its texture becomes smooth. Then roll it into balls and drop them into boiling hot sugar syrup until they’re fully cooked.

To make the thickened milk, boil down full-fat milk until about half of the original liquid remains. Then add saffron (thin red strands that’ll give the rasmalai a yellowish tint) to the milk. Other ingredients like cardamom powder, pistachios, almonds and a little sugar can also be added to the thickened milk. Then dip the rasmalai balls into the creamy spiced milk mixture and chill them before serving. The cheese balls should be soft and spongy when they’re ready. Sprinkle pieces of dried fruit on top for the full effect.

In case you couldn’t tell, rasmalai has a high milk content, which makes it high in protein. And the saffron used in the rich treat also boasts a bunch of health benefits.

The name “rasmalai” itself comes from two Hindi words: ras, which means “juice” and malai, which means “cream.” While it’s definitely not a light dessert, it’s just the right amount of comforting. Like any culturally rooted recipe, there are all kinds of variations of rasmalai (or rosh malai as the Bengali people call it). For example, some recipes use rose water and some use egg.

So, if you’re a cheesecake fan but don’t want any of the crust, give rasmalai a try. And if you’re a little lactose intolerant, definitely get the Lactaid ready.