11 Hot Cocktails That’ll Warm You Right Up This Winter 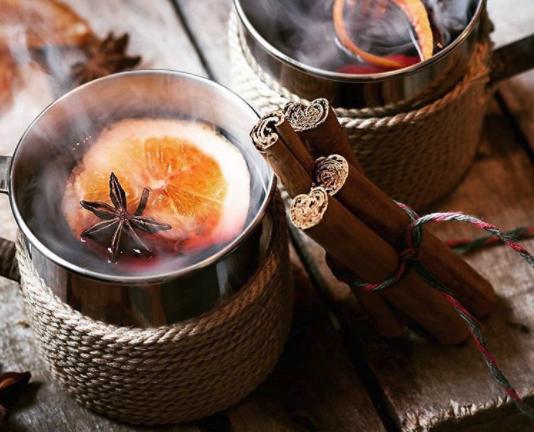 It seems like as soon as we break out the puffy winter coats, our cravings for hot toddies strike. Alcohol might warm the stomach on its own, but toasty cocktails give us a warm buzz from head to toe. So go ahead and spike your cider with your favorite whiskey or add a splash of Bailey’s to your mug of hot cocoa. After all, hot cocktails are what this wintry season is all (or mostly) about. Here are 11 drink ideas to get you going.

A post shared by Heritage Distilling Company (@heritagedistilling) on Dec 3, 2017 at 6:18pm PST

A hot toddy is a combination of whiskey (or any liquor), hot water, honey, herbs, spices and often a little citrus. You can spin this cozy cocktail any way you like.

It doesn’t hurt to try an herby rosemary and pomegranate twist on a hot toddy every now and then.

On the indulgent side, hot buttered rum is a mixed drink often made with rum, butter, hot water or cider, a sweetener like honey and a bunch of spices.

Hot cider and whiskey go together like peanut butter and jelly. So spike your hot apple cider with something like Kavi Reserve, a cold-brewed coffee that’s blended with Canadian whiskey.

Popular throughout Europe, mulled wine is typically a red wine that’s infused with spices like cinnamon, cloves, nutmeg, anise, allspice and vanilla. Mulled wine is usually served warm, and you can add a citrusy twist to it with an orange slice or some orange peel.

If you’ve already made yourself a creamy hot chocolate, go ahead and add a little amaretto, vanilla vodka, Kahlua or rum to your mug.

You can’t go wrong with Irish coffee. This comforting drink usually has hot coffee, Irish whiskey and sugar. You then stir it and top it with a thick cream. Yum.

For something comforting and (kind of) health-focused, try making a spiked golden coconut milk tea with ginger, coconut milk, allspice, black pepper, turmeric and some kind of brandy or dessert liquor.

For a tropical twist on a cozy cocktail, try adding a mango mixer to your hot buttered rum.

The warm spices in a chai tea, like clove and cinnamon, pair well with the spices used to make a hot toddy. Here’s a recipe that combines black chai tea with hot water, honey, lemon and bourbon.

Mojitos can be just as refreshing served warm as they are cold. Try mixing up a mojito hot toddy with fresh mint leaves, a little brown sugar, any kind of black tea, rum and a little lime juice.