Here Are The Best Fish Tacos In California 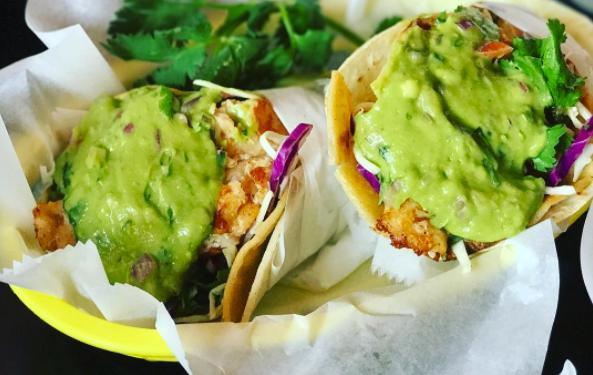 If you live in Cali or you’re planning to visit the Golden State, fish tacos should be at the top of your agenda. In-N-Out isn’t going anywhere. With California right on the Pacific coastline and sharing a border with Mexico, it’s no wonder California has the best fish tacos in the country. Access to the freshest ingredients makes it easy to find killer fish taco joints anywhere from San Francisco down to San Diego. With a coastline that’s 840 miles long, it’s next to impossible to tackle all of the amazing fish tacos, but here’s the tip of the iceberg.

This is the place to be for #tacotuesday. If you’ve ever had the desire to eat tacos in a nightclub, Nick’s Crispy Tacos is right up your alley. The venue is located in the Russian Hill area of San Francisco. It’s essentially a taco stand within a chandeliered nightclub club, where the DJ blasts EDM late into the night.

Order the fish tacos and ask for them “Nick’s Way.” For 95 cents extra, your tacos will be crispified (the inner flour tortilla is fried and then the taco is wrapped in a fresh soft tortilla), loaded with jack cheese and topped with a massive dollop of guac. The fish is beer-battered and fried, which adds the perfect amount of crispiness. You can also order the taco with grilled fish instead of fried if you’re looking to be a little healthier, but REAL TALK — if you’re going to indulge, just indulge.

For a funky taco shop experience head to The Taco Stand in La Jolla. There are a few other California locations, including San Diego and Encinitas. It’s a family-owned taqueria inspired by the taco stands of Tijuana. They make their guac, corn tortillas and salsas from scratch daily and you’ll find the menu painted onto scrap metal above the front counter. You order at the counter, gather all of your sauces from the salsa bar and eat your tacos on the go. The camaron spicy shrimp taco is a fan favorite. The shrimp is seasoned and grilled to tender, juicy perfection and the toppings are generous with avocado, cabbage and tomatoes.

If you’re doing a fish taco crawl, make sure you hit Oscars Mexican Seafood early on. There are five locations, but N. Pacific Beach (right at the heart of San Diego’s surf culture) is the OG hole-in-the-wall spot. Locals will point you toward Oscars and you’ll have to find out why. This location may be a little hard to find, but look for the smoke shop and it’s right next door. The tacos are filled with spicy, bright, tangy and briny flavors. Try the smoked fish taco with the house made chipotle and avocado sauces. The structure of the fish taco, piled high with toppings, makes it a little hard to eat, but the whole experience is worth it.

If you stumble upon Ricky’s Fish Tacos truck consider yourself lucky. Ricky started with just a giant metal fryer on the street and you only knew about him via word of mouth. Now he has a full-fledged food truck. Locals say these are the best fish tacos in LA. For a few bucks, you’ll get a decently sized taco (fish and shrimp are the best) loaded with shredded cabbage, fresh jalapeño, pico de gallo and whatever sauce you want. The batter is just the right level of greasiness while the fish stays moist and tender. Follow Ricky’s on Twitter to see where he’s going.

People who know Bahia Don Bravo will defend it to the death as having some of the best fish tacos. This tiny taco shop at the southern edge of La Jolla has happy hour from 3 to 6 pm, Monday through Friday, and you can try its original fried fish tacos for $1.49 each. It’s been known to have lines that start as early as 10:30 am. The fish comes fresh and piping hot with a golden crispy outside and moist inside. The tacos are a perfect size and the extra rich crema and finely chopped cabbage make them stand out from the rest.

Two brothers run the Blue Water Seafood Market And Grill, where fresh fish lures the locals in. The no-frills San Diego hot spot has a stamp of approval from Guy Fieri and was featured on an episode of “Diners Drive-ins and Dives” a few years ago.

You get to choose your fish on the spot and they’ll marinate it in their spicy chipotle sauce, grill it and top it with cabbage, cheese, onions, tomatoes and a special white sauce. The Mexican-style seafood tacos are served on housemade tortillas from a Mexican restaurant nearby. Guy was a big fan of the sea bass taco with lemon garlic butter. Other favorites include the grilled Mexican white shrimp taco, mahi mahi and lobster. The tacos are pretty big and each one contains about four ounces of fish. You can’t skip out on this one.

What began as a stand at a local farmer’s market is now a full-out brick-and-mortar Mexican and Cuban restaurant in Oakland. Don’t be discouraged by the lines, they move quickly. The fish tacos here are lightly fried with a flaky, crispy crust. They use tilapia, which usually gets a bad rap for being a little bland, but you’ll be satisfied with Cholita Linda’s style. The fish is nestled into a La Finca tortilla and topped with slaw, cilantro, Baja cream sauce and secret sauce, salsa roja. The creamy, tomato-based chile sauce is a secret recipe of the owner’s mom. Tacos are $3.50 a piece.

La Jolla is a quaint, idyllic California beach town right on the coast. The award for the best views during a fish taco experience goes to George’s At The Cove. With the fresh ocean air surrounding you, you’ll need to try the grilled fish tacos. They’re made at the sister restaurant, Galaxy Taco, and come with jalapeño cream, guac, cilantro and shredded cabbage on a corn tortilla.

With gorgeous views of La Jolla Cove, expect to have a little bit of a wait for a table. This isn’t a place you’d try on a whim, so make a reservation in advance. On a sunny San Diego day this is about as good as it gets. The kitchen of this upscale hot spot is helmed by renowned chef Trey Foshee and the menu is innovative and seafood-centric, but reasonably priced for the view you’re getting.