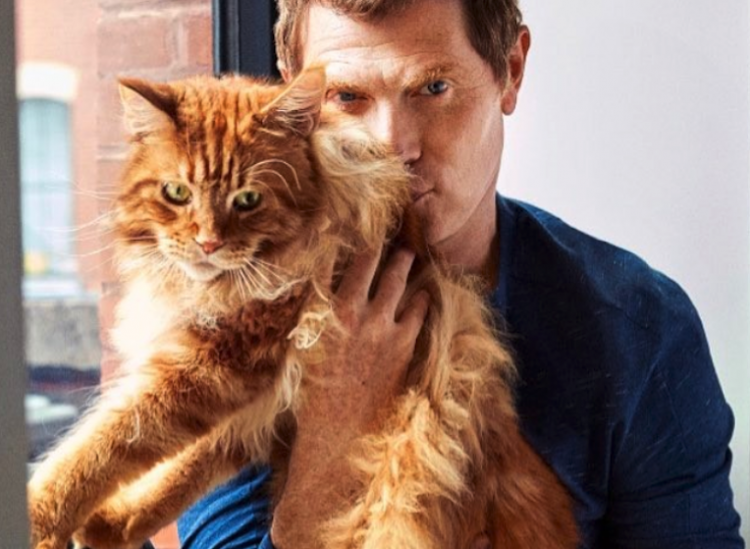 Bobby Flay is one of the most well-known names in food around the world. He discovered his culinary identity at the age of 17 after cooking at New York City’s Joe Allen and after 30 years in the industry. From “Iron Chef America” to “Beat Bobby Flay” to opening five families of restaurants, this New York-based chef has pretty much done it all, in and out of the kitchen. Here are some fun facts you might not know about celebrity chef Bobby Flay.

At the young age of 17, Bobby dropped out of high school. His father put him to work at a New York City restaurant called Joe Allen where he was part owner. After about two weeks working in the Theatre District restaurant, he was offered a job in the kitchen and his boss even paid for him to go to culinary school. The rest is history.

It’s true. Bobby holds another title that has nothing to do with his abundance successful restaurants. He’s the ultimate cat dad. Bobby’s cat, Nacho Flay, is an orange Maine Coon that’s all kinds of fluffy and lion-esque. Nacho’s cuteness level is pretty high up there and Bobby loves to brag about it.

If you don’t believe us, check out Nacho Flay’s Instagram account. The cat has 132,000 followers and counting. The celebrity chef opened a New York City restaurant called Gato a few years prior to getting Nacho (Gato is the Spanish word for cat) after being inspired by an orange kitty he saw on the street.

3. He Was The First Chef To Have A Star On Hollywood’s Walk Of Fame

The television personality, restaurateur and cookbook author was the first chef to be given a star on Hollywood’s Walk of Fame. There’s a lot of responsibility that comes with getting a star and it’s impressive Bobby was the pioneer chef to receive one. Wolfgang Puck was the second chef to receive a star in 2017.

4. Bobby Flay Started Out With An Easy-Bake Oven

When Bobby was a young boy, he asked for an Easy-Bake oven for Christmas, which his parents did get for him, according to Good Housekeeping. You gotta start somewhere, right? Bobby also joined a gender debate back in 2012 about making the Easy-Bake oven gender neutral so young boys would be more inspired to cook early in life. Support from celebrity chefs seems like it did some good for the longstanding toy, which has become significantly less stereotypically feminine over the years.

5. His Favorite Burger Isn’t His Own

Even though Bobby has an entire chain of burger restaurants, Bobby’s Burger Palace, his favorite burger isn’t one of his own. The chef’s go-to burger is the green chile cheeseburger at La Casa Sena in Santa Fe, New Mexico. After Bobby fell in love with the green chile cheeseburger, he was inspired and created a similar dish on the menu at both Mesa Grill and Bobby’s Burger Palace.

6. The Chef’s Favorite Spice Is Chipotle

Out of all of the cuisines that Bobby Flay has experimented with over the years, Southwestern food is his favorite. He’s said chipotles are his go-to ingredient for quite some time now.

7. If Bobby Flay Could Have Dinner With One Person, It Would Be Muhammad Ali

If Bobby could have dinner with anyone in the world, he would pick Muhammad Ali, who’s regarded as the possibly one of the most celebrated sports figures of the 20th century. Since the iconic boxer has roots in Louisville, Kentucky, Bobby said he would make him a dinner of Bourbon-glazed pork chops, cheesy grits and buttermilk biscuits, if he had the chance.