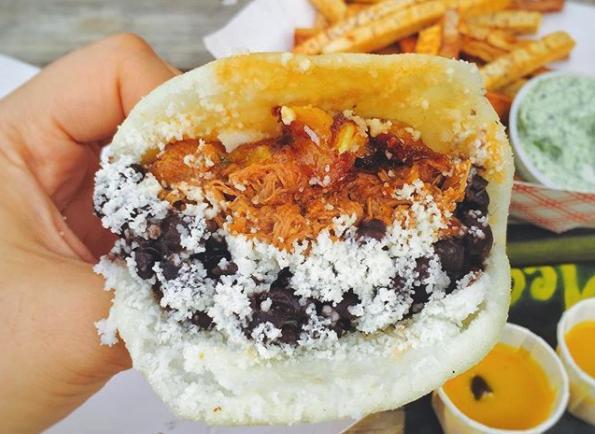 Arepas are a staple street food in Venezuela, and as millions of Venezuelans settle around the world, arepas follow closely behind. These corn cakes can be eaten for breakfast, lunch or dinner, and they can be served as appetizers, snacks or side dishes. With the right toppings, arepas are filling enough for a main meal.

These cornmeal cakes are flat, round and unleavened. People eat them grilled, baked, fried or steamed and the color, flavor and size will vary. Sometimes an arepa is stuffed and other times it’s served like an open-faced sandwich.

You’ll see this Venezuelan street food eaten plain, dipped in chutney or stuffed with meat, cheese, veggies or seafood. The most common version of an arepa is a lightly-fried corn patty that’s split open and packed with juicy fillings.

The ingredients to make these corn patties are simple: cornmeal, salt and water. Once the patties are formed, they’re often fried on a griddle, brushed with oil and finished in the oven.

According to NPR, when Caracas Arepa Bar opened in Manhattan in 2003, very few New Yorkers had any idea what an arepa was. Venezuelan food hadn’t yet made its way through the New York City food scene, but if you search for arepas today, you’ll find more than two dozen restaurants and food trucks that boast Venezuelan culture and cuisine.

When it comes to arepa culture in New York City, Caracas Arepa Bar is often considered the gold standard and one of the driving forces that introduced Venezuelan cooking to New Yorkers. At one point, Caracas (which is also the name of the capital of Venezuela) was just a small storefront in Manhattan, and now, the arepa restaurant has expanded across the city. The menu is filled with hearty, creative arepas, the majority of which are priced at $10 or below. You’ll find creations like La de Pernil with roasted pork, tomato and spicy mango sauce, or the Hot Queen with pulled chicken, peppers, purple onions and scallions over a house-made herb mayo and avocado slices.

There’s a heavy presence of Latin American culture in Bushwick, Brooklyn as well, and a family-run arepa institution there called Arepera Guacuco serves up fresh Venezuelan cuisine that’s as close to home cooking as you can get. The go-to arepas are stuffed with shredded beef, white cheese, sweet plantains and black beans. Shredded beef and chicken are often the most common types of meat used in an arepa, but vegetarians can indulge, too, with the popular avocado, plantain and creamy white Venezuelan cheese arepa.

The Arepas Cafe in Queens also does Venezuelan cuisine justice, with savory arepas covering most of its menu. Customers flock to an arepa called the Domino, which is made with a combination of black beans, Guyanés cheese and Pernil (slow-roasted marinated pork).

Arepas are hearty, flavorful and can be enjoyed by vegetarians, vegans and carnivores alike. These corn patties can be simple or elaborate and you can eat them on the go or with a knife a fork. It’s amazing how quickly a cuisine can infuse itself into a city, and this seems to be just the beginning for Venezuelan food in New York.