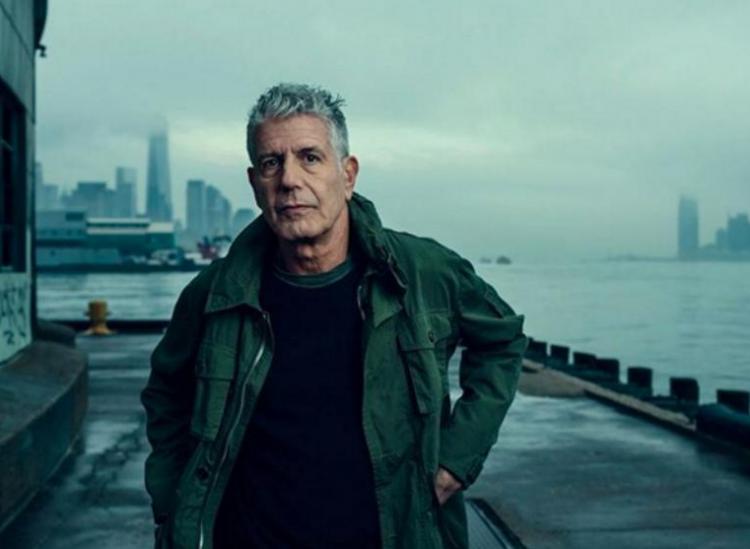 Anthony Bourdain is pretty damn cool. He’s a world-traveling gourmand, American chef, author and television personality who has developed a reputation as one of the most influential chefs in the world. Bourdain has brought a whole new definition to the art of food journalism with his CNN Travel show “Parts Unknown.”

The ballsy and blunt chef explores different cultures and their cuisines around the world that don’t usually get featured in the spotlight. He’s fearless in his quest to understand what makes each culture so unique and vibrant, even if it means going into uncharted territories. Here are 9 weird facts you didn’t know about Anthony Bourdain.

1. Bourdain And His Crew Were Stranded in Beirut During A Major Conflict

During the filming of “Anthony Bourdain: No Reservations,” Bourdain got trapped along with his four-person crew in Beirut, Lebanon, when Israeli forces bombed the city’s international airport and blockaded all of Lebanon’s ports. After a week of laying low, Bourdain and his production crew arrived safely back in the states after a journey that included some time on a military landing craft and the USS Nashville.

2. He Originally Wanted To Be A Comic Book Artist

Before Bourdain’s passion fixated on food, his interests were in a completely different direction: comic books. Back in 2011, Bourdain co-wrote a graphic novel called Get Jiro! that takes place in Los Angeles, where master chefs rule the town like crime lords and a bloody culinary war unfolds.

3. The Chef First Fell In Love With Food After Eating An Oyster

Most chefs can recall vividly the first time they remember falling in love with food. Anthony Bourdain was on a fishing boat in France at the age of 10 when he first tried a fresh oyster, which is said to have sparked his love of food.

The world-renowned chef started his career in Provincetown, Massachusetts, at an iconic waterfront restaurant called the Lobster Pot where he was a dishwasher. The Lobster Pot is still going strong after all of these years, and Bourdain even paid his old stomping grounds a visit during an episode of his series “Parts Unknown.”

5. He Was A College Drop-Out

Bourdain started to pursue an education at Vassar College, but dropped out in the midst of struggling with a drug addiction. Later on, Bourdain went on to finish his education at the Culinary Institute of America.

6. Bourdain Is Best Friends With A Michelin-Starred Chef

There’s a TV bromance between Anthony Bourdain and Michelin-starred chef Eric Ripert, who’s flagship restaurant is the famous Le Bernardin in New York City. Bourdain loves to bring Ripert around the world on food adventures where there’s a ton of wise-cracking, playful pranks, tons of alcohol and all of the rich and spicy foods, according to Eater. The “Parts Unknown” host says, “I like to bring the distinguished three-star Michelin chef and good friend Eric Ripert someplace every year and torture him.”

Outside of the food world, Bourdain has another intense obsession: Jiu jitsu. His devotion is so intense that he has been known to find gyms where he can train while he is filming his TV series. He even won first place in his first ever jiu jitsu championship.

When you’re Anthony Bourdain, there aren’t too many things you won’t eat. That is, except for airplane food. Bourdain was quoted in a conversation with Bon Appetit, saying that he never eats while up in the air. He says, “No one has ever felt better after eating plane food. I think people only eat it because they’re bored. I don’t eat on planes. I like to arrive hungry.”

9. He Once Ate A live Beating Cobra Heart

So, Bourdain won’t eat airplane food, but he’ll eat a live cobra heart? According to Complex, this all went down during a trip to Vietnam. There’s a table-side tradition where they bring a cobra by and let it hiss at you, and then they cut it open right in front of you, and you’re supposed to eat the live beating heart. YIKES. We’re drawing the line here.