20-Mile High Skyscraper Hanging From An Asteroid Could Become Reality 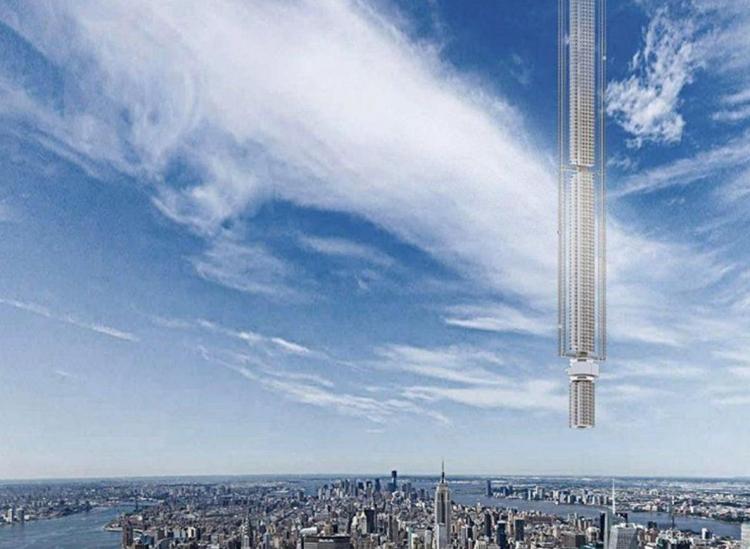 Imagine living in a luxury building 32,000 meters, or 20 miles, high. Elevator rides would be 30 minutes and…the only way back down is to parachute. That’s what’s being proposed with the Analemma Tower, a skyscraper that would hang from an asteroid in earth’s orbit. Yes, we’re having heart palpitations just writing this.

Anyone else feeling SUPER uneasy about how this is gonna work?

Clouds Architecture Office (CAO), the firm behind the concept, is known for bizarre designs and ideas. They definitely have the world listening with this one. According to the company, a “Universal Orbital Support System” would be used to place an asteroid in earth’s orbit and connect it to a skyscraper with heavy-duty cables. The result: residents would be able to tour the whole world in 24 hours. Imagine starting in New York City and hitting destinations like Atlanta, Havana, Cartagena and Panama City in a single day.

The proposed tower would serve numerous functions, according to Travel and Leisure. For example, the bottom of the skyscraper would be used for entering and leaving the structure, receiving packages, as well as for commercial purposes like dining and shopping. There would be floors dedicated to office space, as well as green levels for agriculture and gardening. Then of course, there would be residences. Also included in the building plans: “worship” centers, a reliquary and a funerary.

Believe it or not, the tower would be sustainable. According to CAO’s website: “Water would be filtered and recycled in a semi-closed loop system, replenished with condensate captured from clouds and rainwater. Developments in cable-less electromagnetic elevators have effectively shattered height restrictions imposed by elevator cable spool volume.”

There have been criticisms of the unique architectural plan, and we have to admit, it makes us slightly concerned. How do the cables stay in place all the time, and is the connection to the asteroid secure? Will your circadian rhythm been affected by the time zone and pressure changes? And those are only a few of our questions…